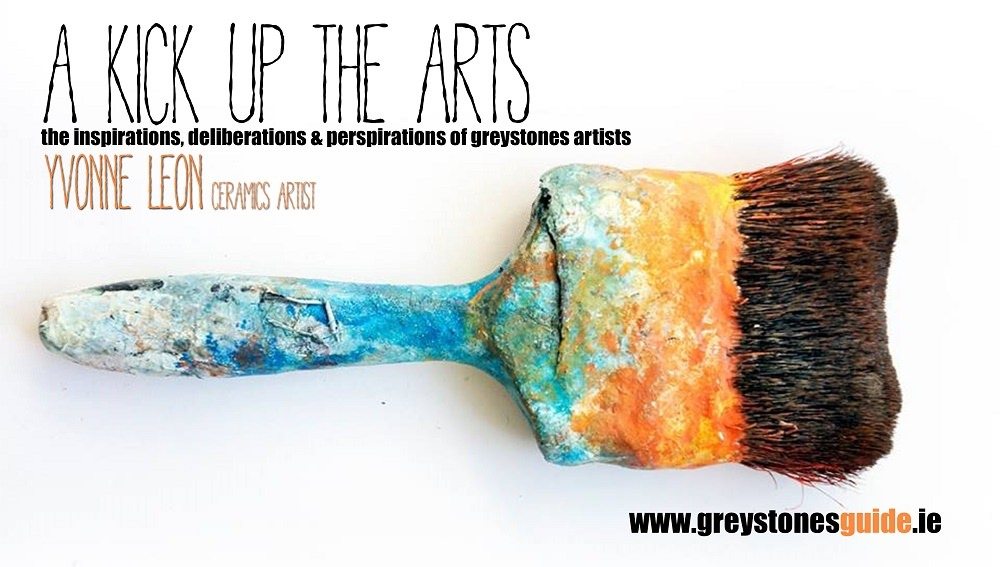 I have worked in a broad range of clay since leaving art college many, many moons ago. Clay and the firing process reminds me sometimes of all the students I have taught over the years. 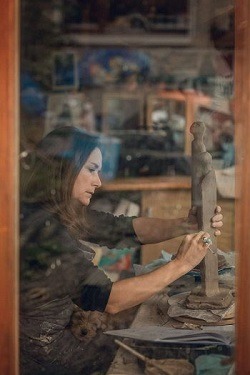 It can be challenging, unforgiving and difficult to work with, and yet it can also be inspiring, thought-provoking, satisfying and joyous.
And when it all works out, it can bring you to tears.

I have taught art for the best part of my life, but working with ceramics is one of my true passions. I was fortunate enough to have a studio in my old house in Kilmainham and had grand plans of giving up the day job and just being all arty in my studio, drinking coffee while chatting with like-minded people.
Unfortunately, the reality was that my husband, Owen, was diagnosed with Non-Hodgkin’s 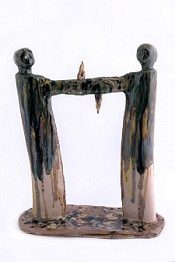 Lymphoma three months before we got married. We were childhood sweethearts – I was only 16 when I met him. We had the whole plan mapped out before us. Step one : buy a house (tick). Step two, three, four and five were all non-runners as they all evaporated as the months went by and the cancer consumed him.
Owen passed away at the age of 30, after only twenty-one months of marriage. At 29 years old, my life fell apart. Ceramics then became the only sure thing that I could remember about being myself. It was my lifeline. I knew that it was the only thing that could not be taken away from me.

You are probably wondering why am I telling you about all this personal stuff?
It’s really very simple; because everything past and present that I have experienced goes into my work. It’s the complicated elements of the human condition that fascinates me. The nature of us. What shakes us to the core, good and bad. The pain of loss still surprises me and it still comes out, but at least it is safely channelled into the clay. 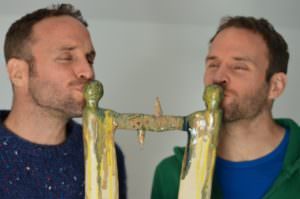 Greystones was the polar opposite to living in Kilmainham now for us. Marc, my new husband, encouraged me to consider it as place to live with our two wonderful boys, Sean and Jack. In 2010, we sold up and got a fixer-upper here in Greystones. Even though the house needed a lot of work done, our first priority was to get a new studio that I could work in. It was a fresh start.

Now I have surpassed my original step two, three, four and five. In fact, I have achieved more positive steps in life that I even imagined possible. You can see it in my work. Look closely, you might find something of yourself in my figures.

My work…
I work with a stoneware clay called ” White St. Thomas’s Body” which I like the name of as it makes it sound like it is spiritual… Who makes up these names? No idea.
Each piece is fired twice. Once for bisque at 1060 degrees then they are hand painted with different high temperature glazes and then again fired to 1250 degrees. Then fingers and legs get crossed, blow a kiss into the kiln for good measure and hope for the best. Sometime it can be a glorious surprise or sometime it can be a sob into the wine bottle, swearing not to touch clay ever again! If something doesn’t look to the way I had hoped, they get fired for the third time but that’s only for the really bold ones!

Three of my favourites pieces of work from the upcoming exhibition… 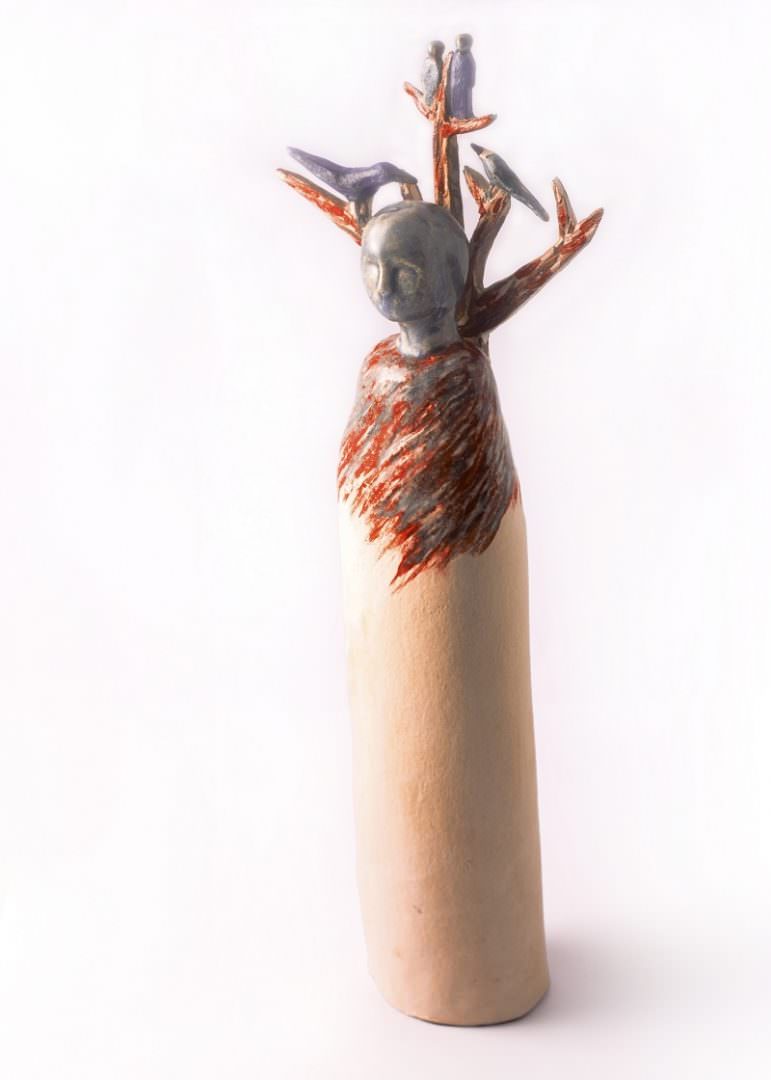 Family Tree
This piece was one of my first ones it is me standing with a family tree on my back. The two figures at the top of the tree are my two boys the birds are my husbands. 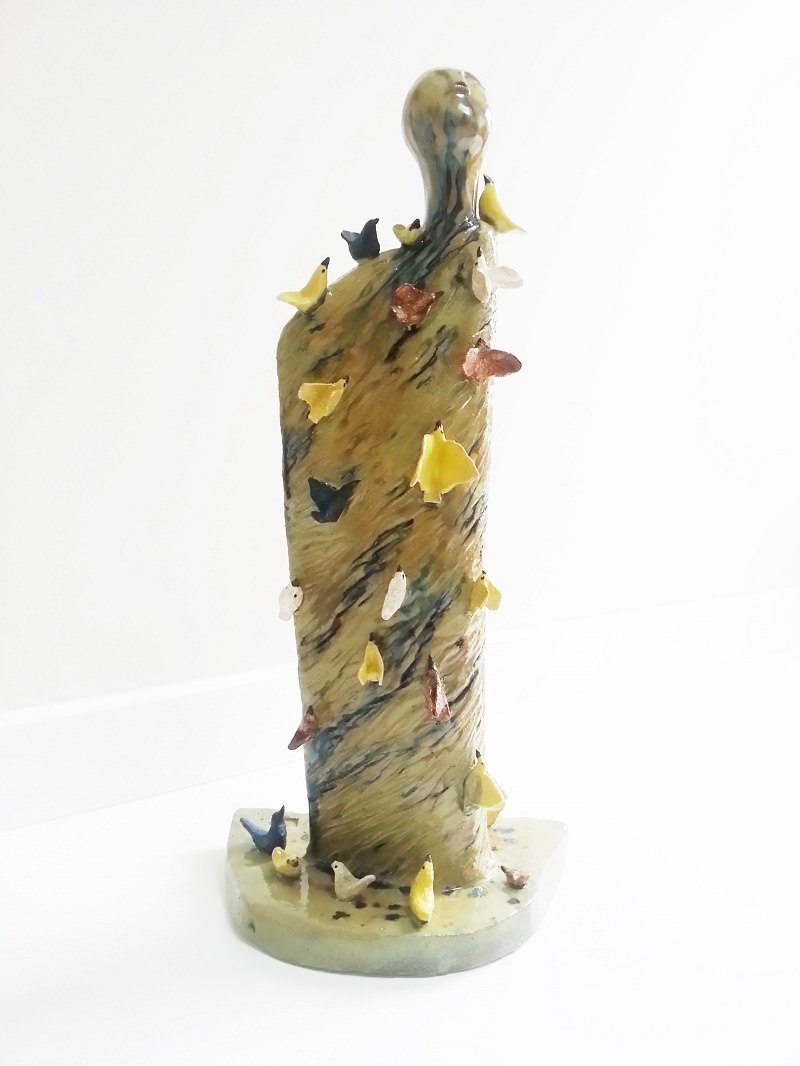 Birdman
This is inspired by the birds out in my garden, the way that they land and then fly onwards. In this piece, the birds are in awe of the man; they flock to him, looking directly at him, yet the man himself looks up to the sky and dreams of having the wings to fly with them. 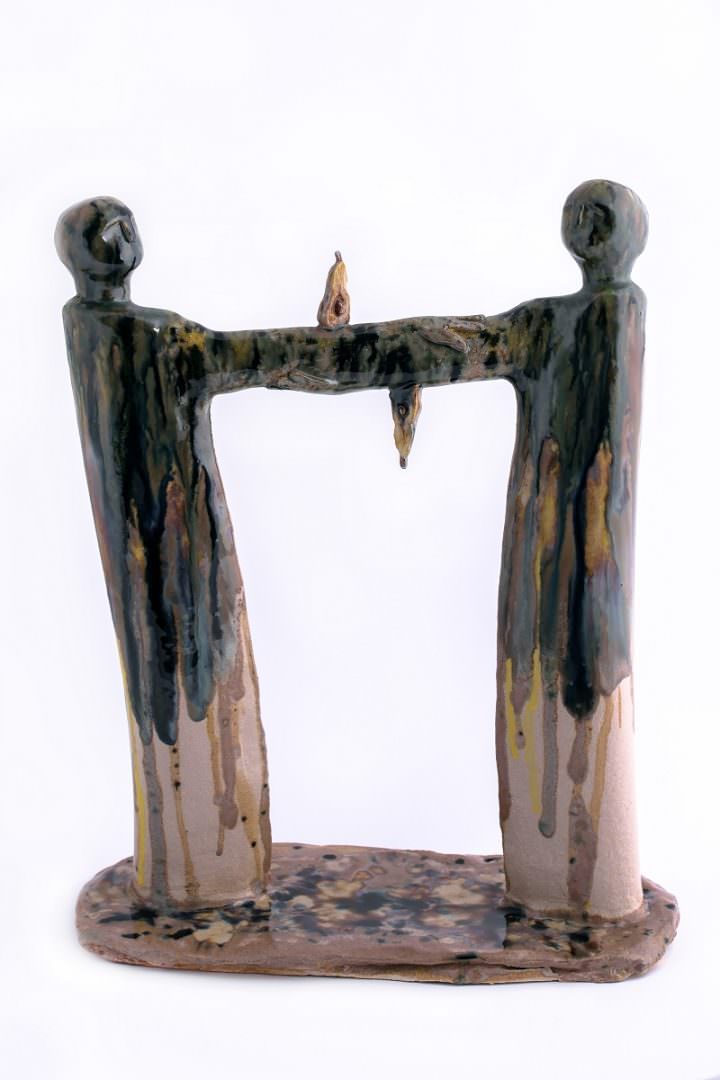 The Happy Pear
I made this one with Stephen and David Flynn in mind. I was struck by their bond, commitment and strength in one another. They are positive to a fault. The world could do a lot better with more people like these guys in it. We are lucky to have them here in Greystones.
All that aside, the piece itself was very challenging to make. This was my second attempt after the first one stuck to another piece in the kiln, fired it again, it warped, and wouldn’t stand up. Then it fell over, stabbed me in the hand. Seriously! After pulling my hair out, cursing my head off and crying ( yes, I did cry over it), it worked second time around. The glaze is amazing, if I can say so myself, and that particular one no longer exists, so it makes it completely unique. Just like the Flynn brothers! 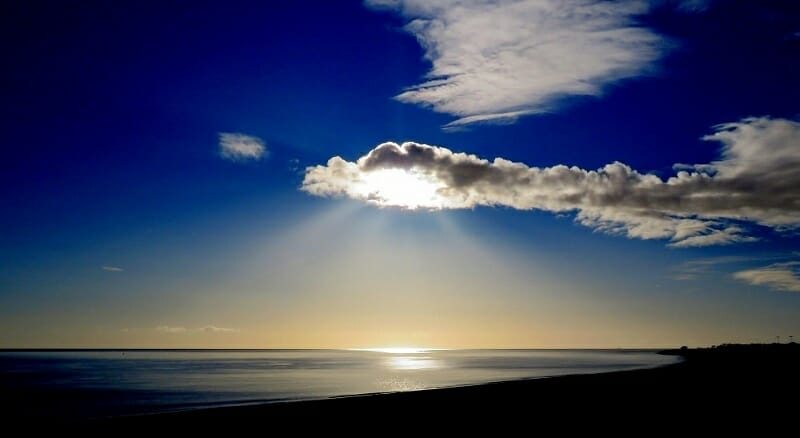 Greystones itself [Pic: Brian Keeley]
Our little family has made itself a lot of friends here in Greystones; we have settled down to the lovely pace of life. We all love the sea, the mountains and scenery… It grounds me. It’s constantly changing, morning, noon and night. It gives my head peace, walking along its shores – that’s when the ideas and images pop into my head, and clears away the cobwebs. Marc and myself call Greystones “our little bubble”. Living here is like winning the lottery without the money! 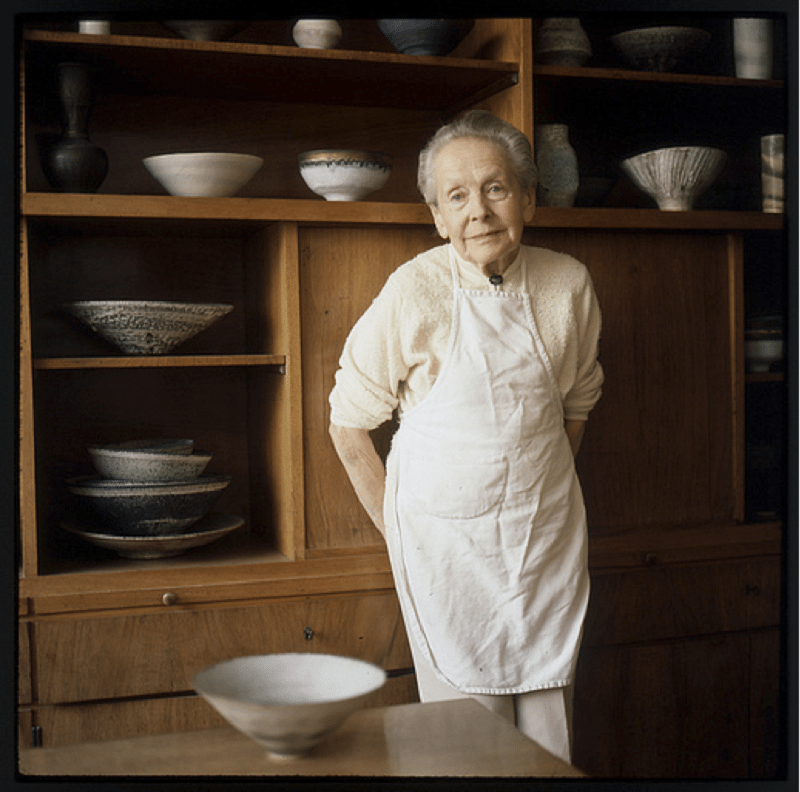 Lucie Rie (Dame)
Lucie Rie had a knack of making Ceramics look simple, and that is incredibly difficult when using porcelain. She was a very influential and famous ceramic artist who lived above her muse studio in Kensington London. She left Austria just before the Second World War and worked predominantly in porcelain, with all her own rich handmade glazes. The Victorian and Albert Museum have an entire exhibition dedicated to her life and works. She has pieces of her work in museums, galleries and in private collections around the world. David Attenbourough is a huge fan.
I have always loved her work as, despite their age, they remain extremely contemporary. She was a true master of ceramics. It was a dream of mine to meet her, but she passed away before I got the chance. I treated myself to one of her smaller pieces with savings I had. It would have been worth a fair bit, so, it pains me to say, but I dropped it when we were moving house…Yep! Ouch.

Claire Curneen
Claire was one year ahead of me in college in Cork. She is now based in Cardiff, in Wales. She makes tall standing figures in porcelain. As I have mentioned before, porcelain is a difficult clay to work in; it tends to warp, crack, dry too quickly – the list goes on. Making figures this height standing on a small base in the way that she does is an achievement in itself. I love the serenity in the faces, the stillness and calm.

You can explore Yvonne Leon’s work on her website here, or on Facebook and Pinterest. You can also see our video chat with Yvonne in situ at her Mini Theatre exhibition from January 2016 right about here.

Postcards From Greystones’ Past