As the M50 and N11 Google alerts ping and pong with increasingly regularity from Monday to Friday here at GG HQ, we have come to realise that the poor, beleaguered 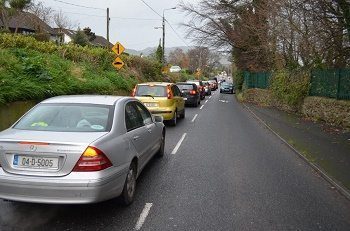 And so it is that we’ve come up with the handy cut-out-and-keep GG Roadwatch Rush Hour Report.

Rather than encourage drivers to read fresh notices every single minute of every single journey about just why their car hasn’t moved an inch in the last 27 minutes, our pioneering report covers each and every single traffic delay possibility – all in one pocket-sized, easy-to-read post.

Something to get you through yet another Roadhog Day… 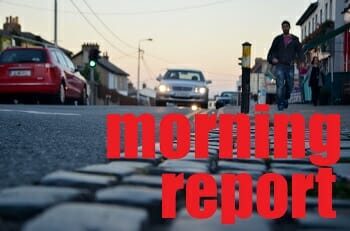 Delays expected on Church Road due to exceedingly lazy husbands being dropped off at Dart station, from the Woodlands, and incredibly unfit kids being driven to school. From the Burnaby.

Also, Tommaso has taken to riding a bike to work, but is having trouble climbing the last stretch to The Bitter Lemon, given that his feet don’t quite reach the pedals.

At the Tesco junction, the traffic lights have been reset from Feck You to Ha Ha. 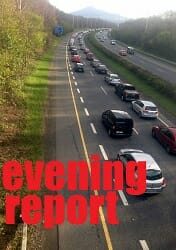 There are reports of a blow-out/burn-out/collision/collapse/cow on the M50 near Bray/Tallaght/Ikea, causing 5-mile tailbacks, and a spontaneous singalong of R.E.M.’s Everybody Hurts.

There’s also a Micra doing a steady 27kph in the fast lane, waiting for that right turn at Enniscorthy. And the driver can’t hear your shouts or horn blasts. Because they have

Nathan Carter turned up to 11. And they’ve been technically dead since 3pm.

On the plus side, the evening M50 rush hour has joined the ranks of Damien Hirst’s celebrated shark-in-formaldehyde piece The Physical Impossibility Of Death In The Mind Of Someone Living and Tracey Emin’s My Bed by winning this year’s coveted, if controversial, Turner Prize as a living, breathing, life-size, 8-mile statue.

In the meantime, some fun M50 blues from The Irish Times here.

Kick Off The Jim-Jams