We reckon that, even if the world should stop turning, those prolific and poptastic Crampton twins would still be churning out groovy singles.

Post-apocalypse, it’ll just be Elliot and Dylan, along with Keith Richards and their pet cockroach, roaming the land in their bashed- 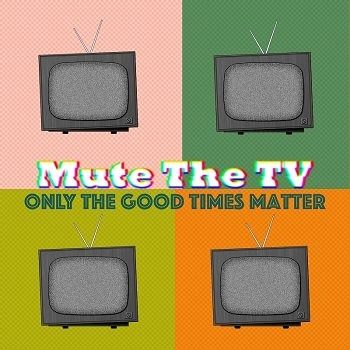 up Beetle, looking for just the right acoustics for their next recording.

Which would explain why, hot on the heels of Dylan’s debut EP in May, and the debut single of the brothers’ side project, Mute The TV, the month before, the feckers have yet another fine and funky offering.

This time out, it’s under the guise of Mute The TV again, with The track is called Only The Good Times Matter, with the flame-haired Elliot explaining, “it’s a song inspired by someone close to us who gets up every morning to go to a job that they don’t particularly like, and a

reminder to them that they’re important to us. Hence the line ‘You’re the reason my heart won’t shatter‘. times matter. I know I’ve felt like that a few times about jobs and that, and forgetting to enjoy the good times. Towards the end, it’s about the feeling of not knowing what direction you’re headed in or what to choose, but reminding yourself that it will be alright…”

When it came to the recording itself, the boys are taking a leap forward from

their sixties-saturated sounds a full 10 years, and embracing all the joys of The Kraftwerk Effect, as they add synthesizer to the mix. Having studio wiz Ingmar Kiang at the controls helps too, of course.

“We’re having great fun experimenting with synth sounds and pedals,” says Dylan, “and allowing ourselves the freedom to try new ideas, whether or not they work out. Just allowing ourselves the freedom to try them is interesting. We form the structure of the song first and then we see what happens in the studio in terms of the instrumentation. It’s great working with Ingmar too, he’s very creative and always adds an extra little something to what we’re trying to achieve and he just gets it.”

You can listen to Only The Good Times Matter below, on Spotify here, and grab it on Bandcamp here.

You can check out more Crampton grooviness right over here.

Thank You For The Days: Helen Banks