s the Greystones First Responders celebrate their 10th year, we talk to one of its founding members – the mighty Margaret Duggan.

According to the Irish Heart Foundation, around 14 people die every day in Ireland as a result of sudden cardiac arrest. And the IHF are quick to point out that many of these lives could be saved if more people knew CPR – or cardiopulmonary resuscitation, to give this life-saving procedure its full name.

For Greystones resident Margaret Duggan, that simple lesson was learnt hard and fast 10 years ago when, on a 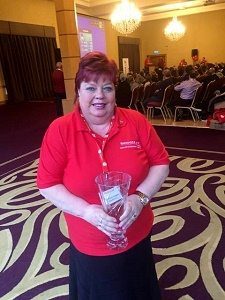 shopping trip to the newly-opened Dundrum Shopping Centre, a man collapsed in front of her, clutching his heart. No one there knew what to do. The shopping centre was so new, it hadn’t yet had any defibrillators installed. Tragically, he didn’t make it.
“That was a lightbulb moment for me,” says Margaret now, sitting in her Kindlestown Park home. “I had such a feeling of helplessness, as this elderly man that I now know had a cardiac arrest, was just lying in front of me, dying. I just felt so empty, so helpless when I got home.” 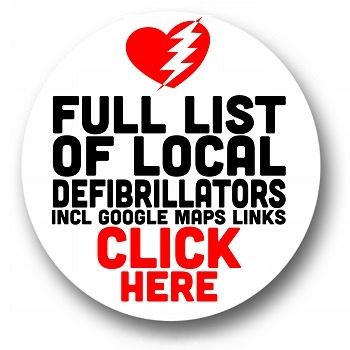 It was then that the lightbulb inside Margaret’s head came on.
“It just clicked – I’m going to learn how to do CPR,” she explains, “and I’m going to learn how to use a defibrillator. At least then I’ll have some chance of helping someone, at least then I can try and save someone who’s dying right there in front of me.
I just never wanted to walk away from a situation like that completely defeated.”
Quite by chance, the very next day, Margaret heard local politician George Jones on the radio, publicising the fact that there was a meeting the following week in the hope of starting up a First Responders group in Greystones. 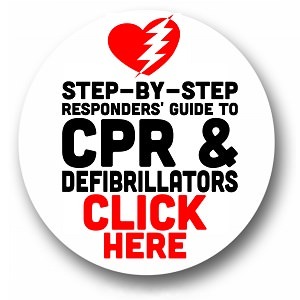 Volunteer groups trained in CPR and defibrillation, Responders literally offer a lifeline to their those in their communities.
“I went to that first meeting ten years ago to form the Greystones First Responders,” smiles Margaret, “and I’m so, so glad I did.”
As as quite a few people in Greystones, of course – some who may not still be with us if it weren’t for people like Margaret and the rest of the First Responders. 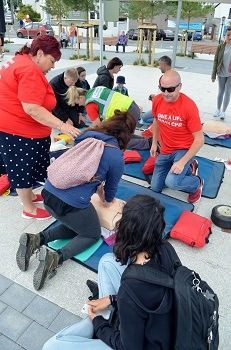 Time to get deep…

There aren’t many jobs out there where you’re potentially dealing with a life or death situation every time you’re called out. That’s got to take some getting used to…
In the beginning, I was very nervous. Thankfully, we’ve got a buddy system now, where two people will go out to any given call.

I have the on-call phone, and if I get a text, I contact the other person on call, and we both meet at the address. I went out so much on my own in those initial years, I usually take a trainee along with me now.

Those first few call-outs though were nerve-wracking And you’re trying to act professional, and trying not to let them know you’re nervous. Especially when you know the people, given that we live in a small town. At the scene, the adrenalin soon kicks in though, and all that training takes over. You soon don’t have any other thoughts in your head other than doing your very best for the person in front of you. Knowing what’s in the kit bag and knowing how to use it, that’s a great confidence builder. Your very presence will do a huge amount of healing, bring a big, welcome wave of calm to the situation.
Exactly. A big plus for people can be something as simple as someone holding their hand until the ambulance arrives. Once you’ve done what you can, the need for that human touch is enormous.

Having come so far from that dark experience 10 years ago, where you felt helpless, to actually bringing a man back from the dead – something that happened here in Greystones with a man you attended – that’s got to make every single second of your training and your decade of being on-call, seem all very much worthwhile… 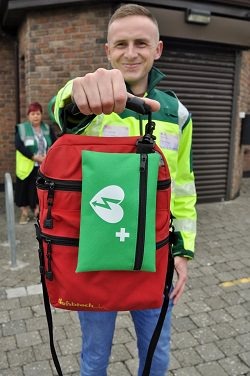 That was a couple of years ago, and I can’t take the praise for it alone. I had a buddy with me, training, and it was a bystander doing CPR that started the chain of survival – which was very important. But we did shock, and we did have a success. So, that was absolutely fantastic. You cannot buy that feeling, and that can be as hard to walk away from as a tragedy. It gets you deeply. We have a lot of support for each other within the group for dealing with the ups and 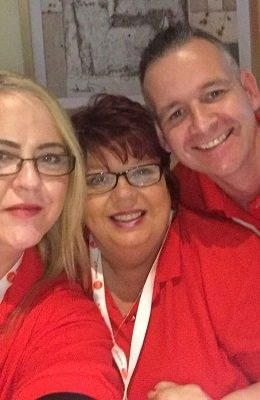 downs, and we also have a counsellor from the HSE, if needed.
Is it my imagination, or has there been a definite upsurge in defibrillators around the town and beyond in the last year or so? And if so, how come – are we getting smarter as a race?

People are getting smarter, and that’s mainly because they’re more informed now – and that’s the most important thing. So, they realise now how important that little box is. It can help save a life. We’re promoting CPR as much as possible in the community, and more and more people are learning it.

There are 32 groups in County Wicklow when it comes to First Responders, and in each group we’ve set out to get as many action pads as possible available in our towns, and to train as many people as we can. And they don’t have to become a responder – if they just want to learn how to use a defibrillator, that’s not a problem.

Is there any particular reason defibrillators have suddenly starting popping up all over Greystones – most recently, outside Donnybrook Fair, and now, beside The Burnaby pub. 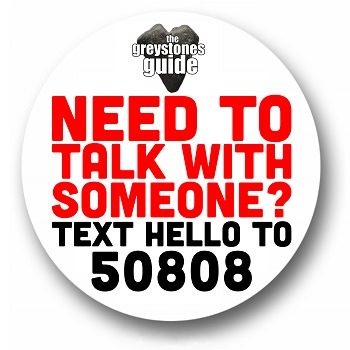 The Greystones Responders will celebrate its tenth year in April, so, in a way, we’re really just starting out. All along the plan was there to get as many defibrillators as possible in the town, but we rely on public funding. We’re a registered charity, so, we have to realise on fundraising to survive. The people of Greystones have always been more than generous when it comes to helping fund the group, but we haven’t always had enough money to have public access to defibrillators. So, we’re starting to do it now, and we’re hoping to get a few sponsors along the way too. 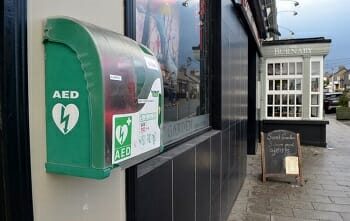 How much does a defibrillator cost?
Initially, they were very expensive, but, thankfully, the prices have come down a lot in recent years. They start at around €800 and then you can go all the way up to about €2,000, for one with all the hi-tech bells and whistles. The ones around Greystones are all around the €999.99 mark – I think that’s the deal we got on at least one of them – and that would be the kind of money you’re dealing with. 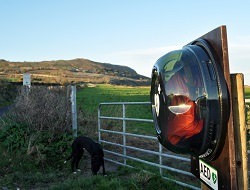 For those in Greystones who would like to know CPR, what should they do…?
We have done several public classes. If anybody comes to us, we’ll point them in the right direction. Some people need a very specific qualification, and they will have to go to a more specialist group. But we’re always here to help.
Both St Kilian’s Church and St Patrick’s Church got defibrillators, and they contacted us about training people to use them. So, we took 15 people from each church, and we came together on the one night, trained them and certified them, and that was a great success. 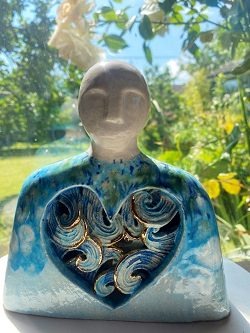 So, this is ongoing. We’re about to certify thirty transition year pupils in St. David’s next month.
So, there’s always a course available that we can put people on, or point them towards. We also do Public Access evenings – we’ve done one every year for the past three years – which is just an open evening or afternoon where, for two hours, we’ll have all the trainers and instructors there. People can pop in and spend as short or as long a time as they like. We’re just happy to give people as many opportunities as possible to learn CPR. 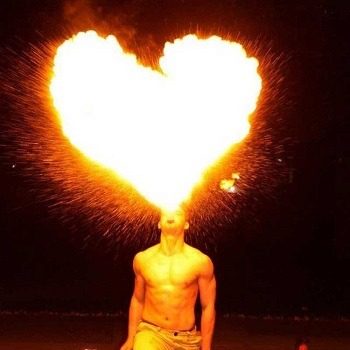 How about funds – how can people help on that front?
We do two fundraisers a year – we’re hoping to have another quiz night in February, in The Beach House – and we also do two days of public collections at Tesco, where we also have demonstrations on CPR and choking, etc. We get a lot of group donations too, which is great.
Actually, we’ve been recently upskilling some of The Sea Scouts, and the Beavers, and now some of the schools. You’re never too young to learn this stuff. Then again, you’re never too old to learn CPR either.

Are we a healthier country now?
I think we are definitely more aware of our health – you can see that with the smoking in particular. But people do die every day from cardiac arrests in Ireland, which means that we really need to be prepared.

Chances are, someone in your area, your workplace, on your street, in your family, is vulnerable. That’s why we want to get as many defibrillators out there as we possibly can.

To find out more about First Responders, you can visit their website here. For information on the Greystones crew, you can click here, catch Margaret’s Walk Of Fame addition here, or email greystonescfrgroup@gmail.com. You can also see a full list of Greystones defibrillators right here.

On Yer Bike – For Beginners