There were so many firsts at the Greystones 2020 launch in the town’s new theatre tonight, it was hard to keep count…

It was also the first time that the Theatre Lane restaurant upstairs catered such a gathering, and the first time their top-of-the-aga-range chefs got to use the new venue’s swanky new kitchen.

And for just about every one of the 180 or so people there, it was their first time inside Ross McParland’s theatre of dreams.

Which is all very fitting, given that the main reason we were all here was to receive the first official hello from Greystones 2020, a collection of local people from all walks of life coming together to help the whole town come together. 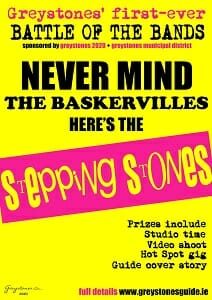 Having done just that with the recent Stepping Stones: Battle Of The Bands competition – bringing together some of the finest young musicians in the town and beyond – and being the gringos who saved our Christmas 2016 at the 11th hour, this motley crew are also engaged in a bunch of exciting new Greystones projects for the years ahead.

And it’s important to point out that this is a voluntary, non-profit group who will be hoping to connect people who can help one another, as well pulling together funding – through donations, membership, grants, sponsors, etc – for those projects that will simply make Greystones a more rock’n’roll place to live.

As if that were even possible.

It’s early days, of course, and there is much to be done, and learnt, but the motivation, the smarts and the goodwill are all there.

We were lucky enough to have former President of the European Parliament and Today Tonight presenter Pat Cox on hand to formally launch proceedings, with some very stirring words about the good people of Greystones working as one on our particularly bright and exciting future.

We were all pretty darn impressed with his hand shadows routine too. 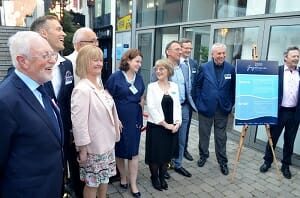 The night ended with yet another first, as an impromptu band made up of two sets of siblings – guitar hero Stuart Crampton and his budding guitar hero son, Dylan, alongside opera warbler Dara McMahon and her incredible one-man-band 11-year-old son, James – conducted their first gig whilst marking the new theatre’s first-ever gig too.

We thought it worth recording that momentous momen, for prosperity, although, we should warn you, this ambitious little medley goes on a little too long. About four hours and 26 minutes too long. We counted.

And just to prove that Greystones 2020 are full of good ideas, we’ll have an interview up tomorrow with local artist Tom Byrne, who has been commissioned by the gang and the Tidy Town terrors to fill our Dart stations with a series of paintings celebrating the many great artists, writers, thinkers and chancers who have hailed from, worked in and were inspired by our town…

Which is going to look pretty damn kick-ass.

So, congrats to Greystones 2020, and all who sail in her now, and in the future. We’re going through something of a golden age in this town, and if we work together and help one another, hey, we can all shine on…

You can find out more about the Greystones 2020 gang right here.

The Good Word From On High