In The Name Of The Mammy 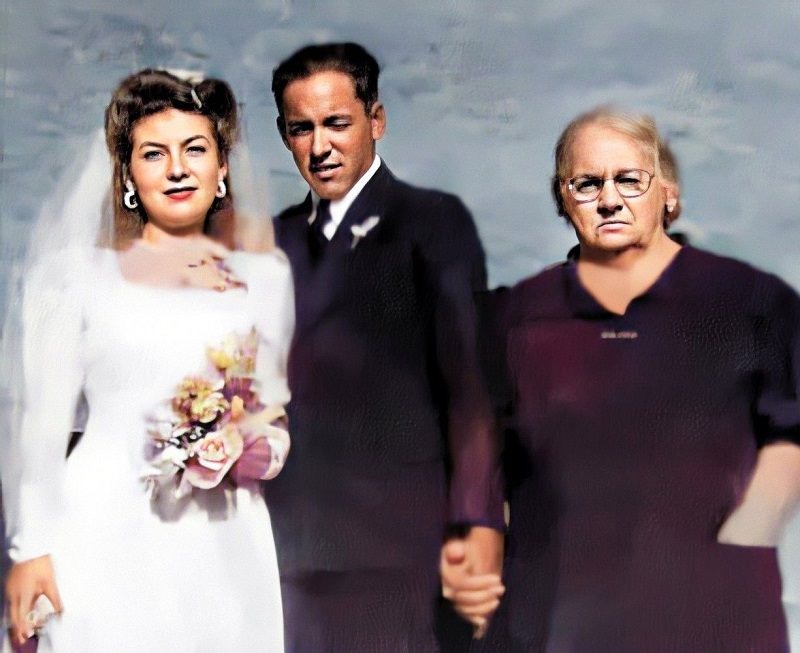 s the old saying goes, if it ain’t one thing, 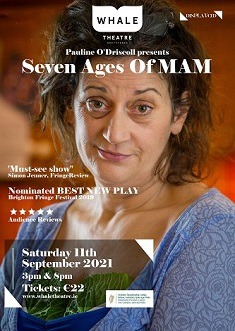 Especially when it comes to the fabled Irish mammy.

A woman who’s ready to walk through fire and brimstone to reach their child. So she can tell them how much of a disappointment they are. 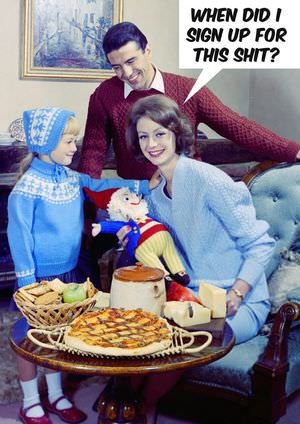 This special breed of mother’s love is at the core of Pauline O’Driscoll’s acclaimed one-woman show, The Seven Ages Of MAM, the last few decades of Irish history told through the prism of one strong, funny and very vocal woman’s life.

Coming to The Whale theatre on Saturday, September 11th – at 3pm and 8pm; tickets here – we asked

Ms O’Driscoll to tell us the inspirations behind the show.

And how, come to that, she got from there to here… 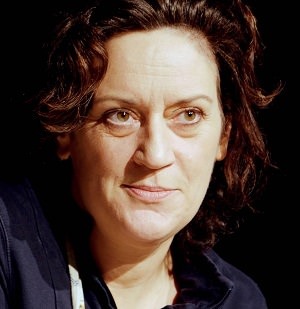 Ah, the old ‘how did I end up here?’ question. Well, I took the scenic route, that’s for sure, because if there’s a hard/roundabout way to do anything, that’s the way I’ll do it.

I guess you could say the writing was on the wall because as a child, I was always putting on plays at home. I loved and excelled at speech & drama (known as elocution lessons back then though) and my pin-ups were Fred Astaire and Ginger Rogers (literally). Even though they were before my time, I absolutely loved, and still love, to watch the classic movies they starred in together.

Fred Astaire & Ginger Rogers
Two of my favourite dance sequences are Astaire on the ceiling to You’re All The World To Me in the 1951 musical Royal Wedding – – which blew me away as a child – and the one above, from Swing Time, which is just miraculous.

Fame
When the TV series Fame hit our television screens in 1982 I thought I would die with the heart-thumping, skin-tingling excitement of it all. A secondary school where your main focus was singing, dancing, writing and acting – the very idea of it thrilled me to my core.

But, that was a pipedream, something other young people in other countries did. It was a different time and Ireland was a different place back then. So lacking the courage of my convictions and having been actively dissuaded from a career in the arts, I opted for the sensible route of a B.Comm degree from UCC. When I graduated I moved to England and began my marketing career working for St Ivel Foods Ltd.

The hope was that marketing would satisfy my creative drive, and it did, for a while. All that changed however and the acting bug came back and bit me hard when I got a Donnelly visa and ending up moving to the USA. I had taken a break from travelling state to state on a Greyhound bus and was living the life of an au pair/tequila slammer girl/ski bum in Aspen, Colorado when I met a self-professed actor/singer/drummer called Saphyre. When I realised just how insanely jealous I was of the ease with which he defined himself as such I knew I simply had to pursue my dream of being an actor.

With the encouragement of Alice Spivak, an acclaimed acting coach from New York, who was teaching a summer acting class in Aspen, I ended up moving to New York where I got to live out my own Fame dream and train full-time with the late great Uta Hagen and others at HB Studio in Greenwich Village for three years. I never looked back and have been proud to call myself an actor ever since.

Having performed the incredible solo play written by Mark Evans called You Have It All Backwards, about a Syrian mother’s journey to Ireland, I knew I wanted to work with Mark again. As parents ourselves we both wanted to explore motherhood further and Mark had always wanted to write a contemporary piece using Shakespeare’s Seven Ages of Man’s ‘All the world’s a stage‘ speech from As You Like It as a jumping off point.

So that’s where we started, and through a wonderfully collaborative process of workshopping and co-writing, we got the point where we had a 70-min play which made its world premiere at Brighton Fringe 2019, where it received a Best New Play nomination and was being dubbed a must-see show.

Now, over two years later, we are beyond excited to finally finally be making our Irish premiere at The Whale in Greystones.

But without a doubt the biggest inspiration for me, not just for this play but as a woman and mother myself, has to be… 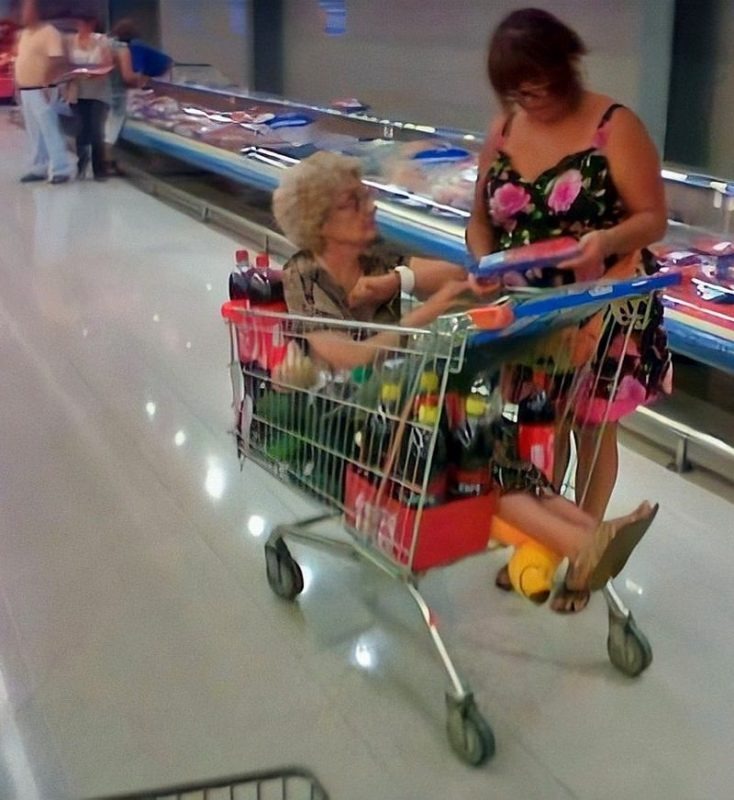 The Mammies!
I have been enormously influenced by the powerful women and, to quote a line from our play, ‘the long line of mammies‘ I come from.

A lot of our history tends to be passed down along the paternal line so a big part of what Mark Evans and I wanted to explore in the writing of Seven Ages of MAM was the maternal line. My mother, my grandmothers and my great grandmothers are and were extraordinary women of strength, courage, wisdom and vision. Each was ahead of her time in the way they thought and fought for the rights of women. My paternal great grandmother Maria O’Driscoll (pronounced Mariah), having been widowed in 1888, went on in true matriarchal fashion to single-handedly raise five surviving children of whom she championed P.J., my grandfather, to become a solicitor. In 1899, he founded P.J O’Driscoll & Sons Solicitors.

In 1926, my paternal grandmother, Agnes Collins – at the ripe old age of 22 – had the courage to defy her family and marry her much older boyfriend, the aforementioned PJ O’Driscoll. And no, it wasn’t a shotgun wedding, as my father is quick to remind us all, as he didn’t arrive until a full thirteen months later. Her twinkly-eyed mischief-making and her joie de vivre remains with me to this day. The entertainer gene has definitely been passed down from the Collins side.

My maternal grandmother, Lillian Holland, was a woman well before her time, a true feminist and wonderful role model. She refused to be ‘churched’, a ceremony that used to be performed on women after they had given birth in order to cleanse them before they could return to church. Her stance caused quite a problem for the parish priest who ended up having to throw a bit of a blessing at her from across the street.

My own mum is the most extraordinary woman I have ever met. Her enquiring mind, her desire to continually learn and keep herself informed and up-to-date politically, socially and culturally, her age-defying elegance, her ever-available listening ear and supportive nature, her mind-boggling stoicism in the face of adversity, her quiet strength and, best of all, that subversive feminist streak inspires me daily. Like her mother before her, she has always been an advocate for equality and women’s rights. There was no such things as boys’ jobs or girls’ jobs in our house; all six of us were taught to waltz, cook, clean, plait and sew. Hence both my brothers are dab hands on the sewing machine! These are my ancestors, the long line of mammies I hail from, all this is in my DNA, I love that!

And I love to make people laugh. It is just the best feeling ever. If I can move them and make them think about things in a different way at the same time then I’m in performer heaven. I am driven basically my the desire to entertain and move people but within that I want to make work that is relevant and real and get them thinking. I want to explore issues that affect ordinary people in an honest, open and raw way that relies solely on great writing and a great performance. When the script and performance are good enough you don’t need anything else. 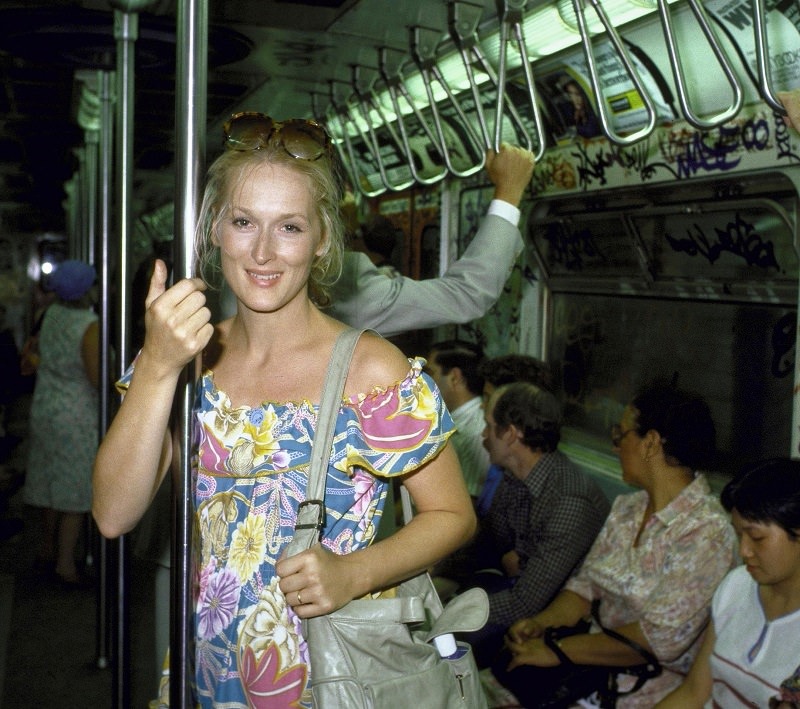 When it comes to actors whose performances inspire me, pretty much everything that Nicola Walker, Susan Sarandon, Meryl Streep, Allison Janney and Laurie Metcalf have ever done both on stage and screen.

I love their work. 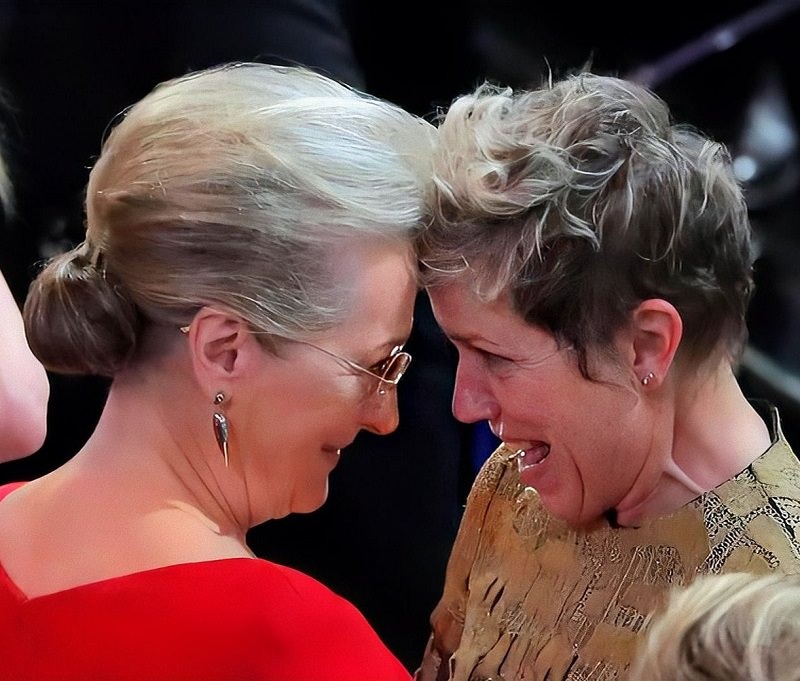 The best recent film I’ve seen is Nomadland with Frances McDormand. Wow, what a subject matter, what a performance.

I loved her in Three Billboards Outside Ebbing, Missouri also. That was a genius character-driven film with fantastic performances all around. Martin McDonagh has always held a special place in my heart, not just because his writing is incredible but also because it was through him – or one of his plays at least – that I met my husband, Seán. I was playing Maureen in The Beauty Queen of Leenane at the Haymarket in Basingstoke and Seán was my landlord…

The best play I’ve ever seen (if I had to pick one!) – I was blown away by Angels in America when I first saw both parts of it on Broadway back in 1993 when I was living in New York.

So, it was fantastic to be able to see the National Theatre’s production of it with Andrew Garfield, Nathan Lane and Denise Gough online via National Theatre At Home during the last year.

Thinking about other inspirations, there are three poems I always go back to, take solace in and find myself thinking about all the time.

Firstly, If by Rudyard Kipling has been with me my whole life; it was up on the wall at home when I was a child and my parents often and still do quote from it. It’s a poem that has inspired me, soothed me, encouraged me and calmed me. It seems have a sentence that speaks to whatever I’m going through at the time. It is now up on the wall in my home so that hopefully my children may take something from it and come to love it as much as I do.

Cher Believe
One of my favourite energy-shifting songs to rock out to.

I love to dance, I would dance all day long if I could so whenever I want to shake things up and lift my mood I turn on Classic Hits FM and dance around the kitchen like a lunatic until I feel better or have gotten the inspiration I needed to tackle the next job or obstacle on my list.

David Gray White Ladder
When I just want to chill out and wind down two of my favourite albums to listen to are David Gray’s White Ladder.

And if I had to pick one track it would be Sail Away especially in the last eighteen months when I have just wanted to sail away and escape all the madness. The other album is Eva Cassidy’s Songbird. I just love her version of Autumn Leaves.

You can check out the Seven Ages Of MAM promo video here, and go grab yourself a ticket for September 11th’s show here.

And Then There Was One…