~
As the shocking news broke during the week that Matt Kemp had passed, it 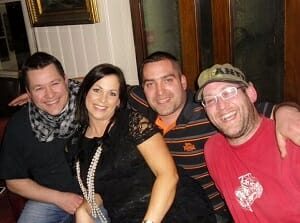 was a struggle here at GG as to how we should pay our respects.

Knowing the family, but not truly knowing Matt – he had spent the last 20 years living in Spain – we felt it best to check with his brother, Alex, and the rest of the Kemps as to how best to commemorate the man. 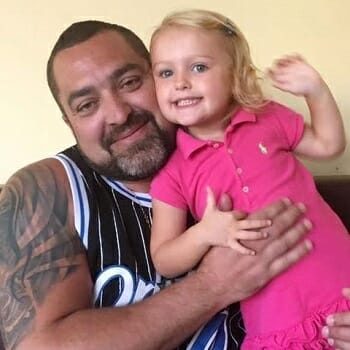 The Kemps – Vanessa, Jeremy, Alex and mum, Carol – will be over in Parque Cementerio San Caventano this Wednesday, May 24th, for Matt’s funeral, with a second service still currently being planned for somewhere closer to his childhood home here in Greystones. In the meantime, what to say about this larger-than-life guy…?

As his sister-in-law, Aisling, explains, underneath it all – the tattoos, the mischievous, menacing smile, the mock macho poses – Matt was a very kind and

gentle guy. Especially when it came to kids – and in particular, of course, his beautiful, four-year-old daughter, Bella Rose. Only football came close to receiving the depth of love Matt felt for his beloved Bella.

Spain is where Matt made a new life for himself, where he became a father, and where he met his best friend of the last 20 years, Gary – who, coupled with Wayne, were his two brothers from another mother. 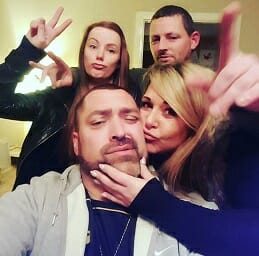 And let’s not forget his lifelong buddy, Niall Sweeney.

Greystones is where Matt spent all his formative years though, in the bosom of his loving family, and in the bars, booze-ups and barbeques of his many friends here. Matt was one of the few people around here who could actually out-party Laura Dicker. And that’s really saying something.

On both sides of the Irish Sea.

And that, undoubtedly, is the way Matt would want all his loved ones, buddies and best friends – whether perfectly pale or terrifically tanned – to remember him. With a smile on our faces…

There will be a service for Matt in Greystones, on Saturday, June 3rd, noon, at St Patrick’s Church…

The Thrillas In The Villas

Rest peacefully Matt. You’ll be missed greatly by all who knew you.

Rest in peace, and our condolences to Gary and the family. I worked with his dad Robert a long time ago, and only met Carol a few times. With such parents he could only be a great person. Our hearts go out to you.

I have many great memories of Matt through my younger brother, and Jer. My mum remembers the time she fell over on Greystones Main Street on ice and he came over and helped her up, also the time she held his hand on a school trip with Miss Jacksons class to help him from mucking about and getting into trouble. RIP Matt, you’ll be missed x

He was a childhood friend of my big brother and I’ve always looked up to him but more so when, a few yrs back my coal bunker that I’d just filled was completely fleeced, whilst still in Spain matt organised for it to be refilled without a thought or want of recognition RIP matt