A haven for sinners and saints 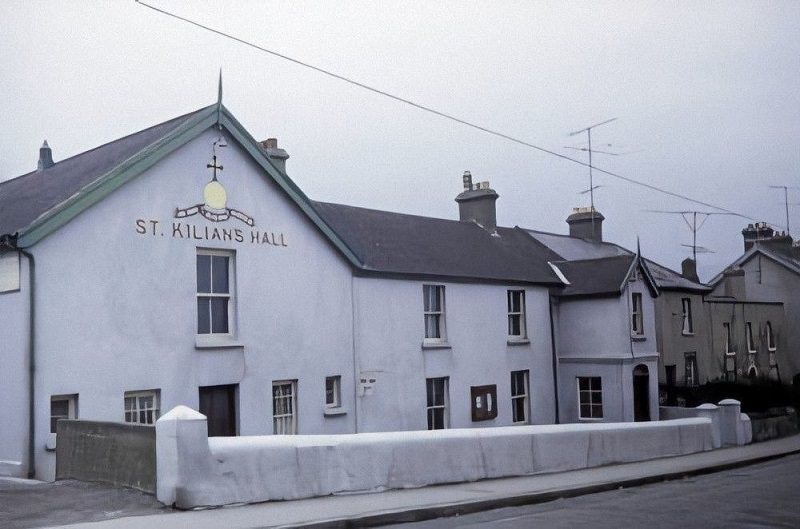 Pic: Harrison Forman from the University of Wisconsin

or a hall that was the centre of so many Greystonian’s world for years on end, it’s surprising that there are so few photos of St Kilian’s Hall.

Built for saints, and yet home to quite a few sinners during its teenage P’n’R disco days, Kilian’s was a lot of things to a lot of people. 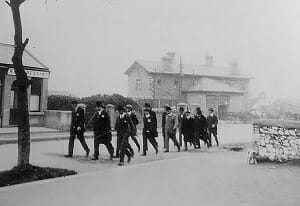 Originally built at the end of the 19th century as the Church of Ireland’s parish hall, and originally called Trafalgar Hall, this late, lamented landmark – it’s now apartments, of course – was, for many years, Greystones’ very own Orange Lodge. 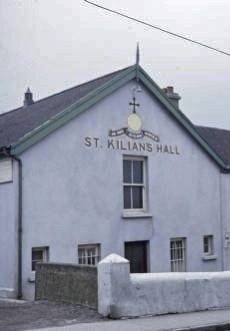 Just in case you didn’t know already, for a while there, the Protestants really got a hold of this town.

This was a time when, of a population of 900 people, 600 attended the Church of Ireland.

During the 1920s, St Kilian’s was almost destroyed by fire, later being acquired and rebuilt by the Holy Rosary Parish before being reopened as a Church Hall in 1928.

And that’s when Kilian’s became the centre of many a Greystonian’s social life, as the hall became a cinema, a dance hall, a snooker room, an art school with Mrs Booth, the Greystones Harbour Market,Tae kwon do with Ken, Gladys Sheehan’s drama classes every Friday, ballet classes, pantos, bingo, beetle drive, Irish dancing, the birth of St Laurence’s National School and, of course, a scout hall. 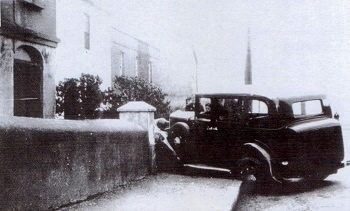 Even Éamon De Valera found use for St Kilian’s, when he made an address there circa 1950. Give or take. 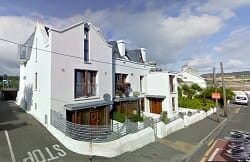 The Dublin Catholic Diocesan Trust put St Kilian’s Hall on the market in 1999, going to auction on July 7th that year. The 4,000 sq. ft building was, of course, quickly snatched up, the old Victorian architecture being

demolished in 2001 to make way for some swanky apartments that, mercifully, echoed some of the characteristics of the original Victorian building.

For GG, it was always that magical place, sandwiched between battling the one-armed bandits

down in Joe Sweeney’s amusement hall and trying to get a snog down in the bus shelter at the harbour, a place where you could twist the night away to Bowie, Quo and T-Rex.

When you weren’t busy going Full West Side Story with those smelly Kilcoolers, of course. 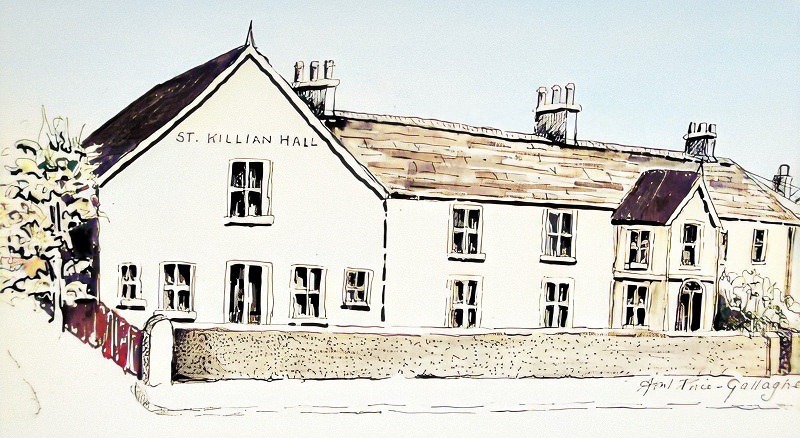 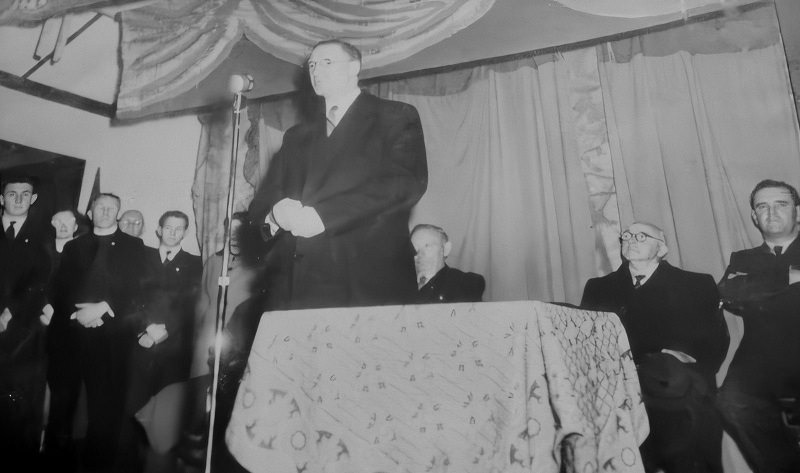 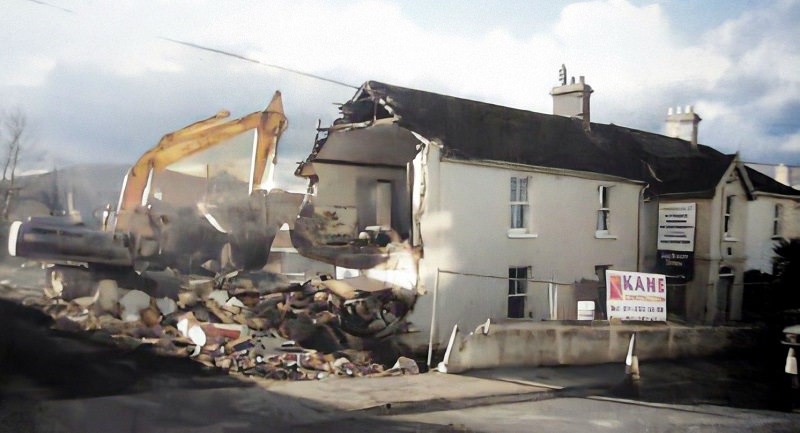 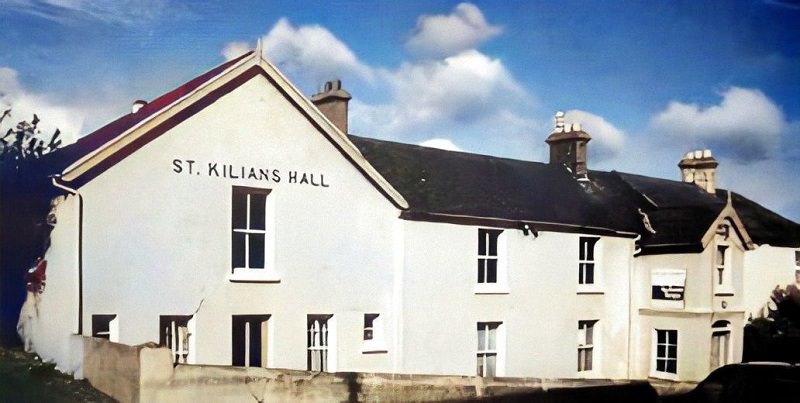 In all its glory… 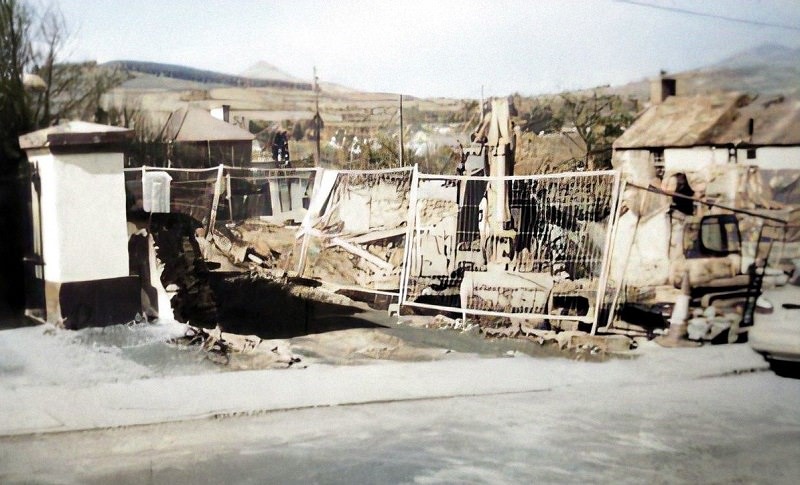 Halfway from here to there… 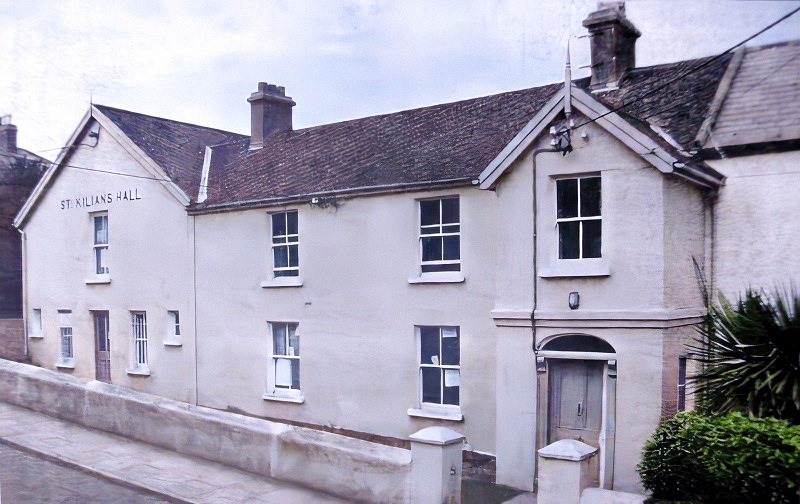 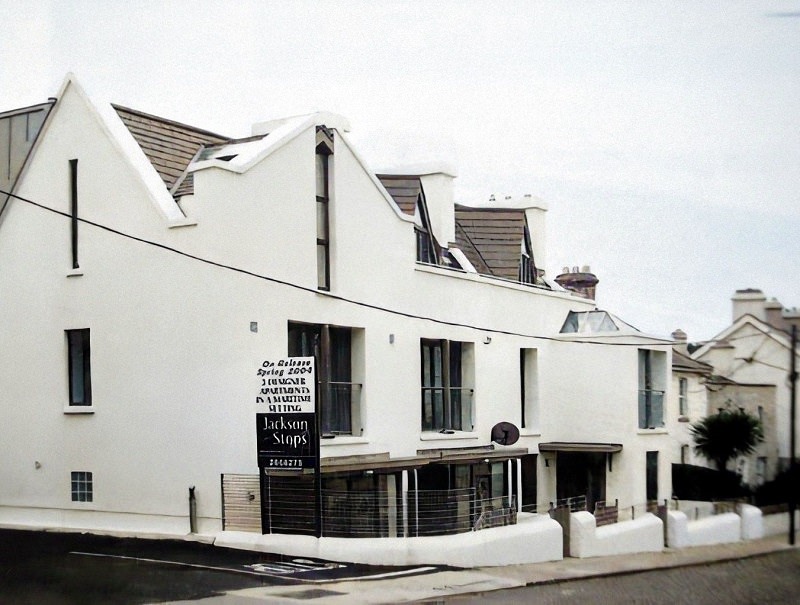 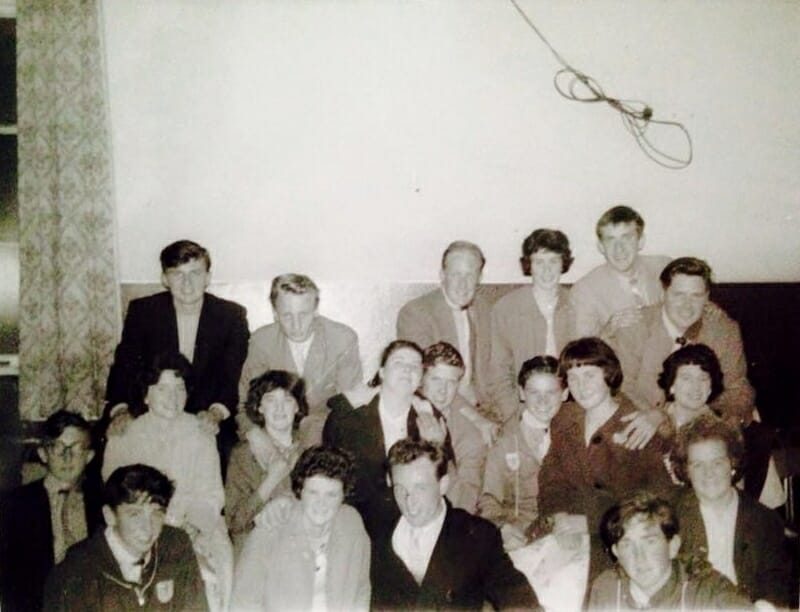 I can date Mr De Valera’s visit to St Kilian’s Hall as the 19th of June 1955. The Christian Brother pictured with Dev is Brother O’Callaghan who was the Superior of St Kevin’s CBS. I was one of the CBS Tin whistle Band who met De Valera on entering the town by car and we accompanied him to St Kilians. I can remember the day quite well in that I was one of the Tin Whistelers in the individual Feis competition, however when it was my turn to perform the curtains came across prior to my appearance and I recollect Br O’Callaghan “God,Hayden hasn’t been on yet, open the curtains”. They duly opened and I gave my piece with Dev sat in the front seat. It was a reel that I can still Hum but it’s name evades me. I cannot have been that good as a B.Flynn from Monkstown came 1st with Donal Nolan from Killincarrig second.
Mostly the competitions consisted of Dancing, singing, mouth organ, and the previous day conversation in Irish, History and Drama.
De Valera gave the following speech in furthering the Irish language, ‘If you do your part in this generation,the oncoming generation will be able to complete the task. If we don’t,then the task for those coming after will be much harder.Lend your support then,don’t listen to those who tell you that it isin’t worth while.That all Nations are the same.Don’t listen to these people.They don’t represent the ordinary natural human feelings. Listen to your own heart,obey your own feelings of sentiment and do your part to make this nation of ours a wholly Irish nation’
Brother O’Callaghan gave a speech in Irish thanking Mr De Valera and lauding his strong commitment and encouragement of the Irish language and praised him for what he had achieved in his service to the State.
In conclusion can I state that it isin’t that I have a great memory but I subscribe through the British Library Newspaper Archives and apart from my own recollections the other information was gleaned from The Wicklow People Newspaper dated Saturday 25th June 1955.

Top man, Brendan. Great to have that info…

What NO mention of Reggie Dwight in your concluding remarks……..

Saturday Night’s All Right for Fighting !!!!

Paul, The photo of Dev in St Kilian’s Hall was almost certainly taken when he officially opened a feis organised by the Greystones Branch of the Gaelic League, of which I was a member, and for a year or two, Joint Secretary. Doctor Patrick MacCartan, who ran for President against Seán T. O’Kelly of Fianna Fáil in 1946, was our Honarary President – Uachtarán. In that particular year, when the second interparty coalition government led by John A. Costello of Fine Gael was in power, the committee of the Greystones Cumann of Conradh na Gaeilge thought to invite Eamonn deValera to officially open Feis Clocha Liatha. Doctor Mac Cartan suggested asking Sister Gonzaga, the Mother Superior of the local Congregation of the Holy Faith Nuns, and who was an old friend of Dev’s, to approach him. He was pleased to accept our invitation. I could scarcely credit his patience that afternoon. He focused on every individual child as they came on stage to perform, and didn’t leave for the grand supper awaiting him afterwards in the convent until the very last child had finished and the prizes were awarded. For a man who could scarcely see what was in front of him – his eyesight was that far gone – it was some performance. I have always admired him for it. jago Hayden

Far be it from me to let facts get in the way of a good story. However, it’s most unlikely that Dev spoke in the Hall ‘around 1920’. As you mention, the Hall was at that time the meeting place of the local Orange Lodge – hardly Dev’s natural constituency. In any case, he was actually out of the country for much of 1920 – he went to the US in mid-1919 and only returned to Ireland, and to Greystones, in December 1920. The photo above, which presumably shows the famous meeting, seems to show him as an older man – I’d put it in the 1940s or even 1950s. (If you could magnify the photo, someone might recognise one of the worthies behind him.)

Ah, took the info from that eejit Paine. Should have known better.

To the author: is it just Protestants that you dislike? Or would you prefer other religions didn’t reside in Greystones too? (It’s 2017 you moron)

I think it might be best to approach such age-old problems as the once-great religious divide in Ireland with a degree of humour, dear Stuart.
Otherwise, we’re just letting ourselves be oppressed by such my-church-is-bigger-then-your-church nonsense.
But, hey, thanks for your thoughtful and insightful comment. Very loving. Very understanding.
I’d say you’re a gas man at the oul’ dinner parties… (It’s 22:37. Go to bed. You dick)

Greystones People Of The Year 2017