The best bar in the world. Fact. iven that we can put a man on the moon, and squeeze 65,323 houses into the miniature village that is Delgany, surely we can airlift The Harbour Bar from Bray to Greystones…?

Goddamn, this is one amazing bar. 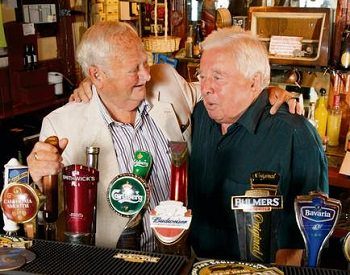 Even before it moved from the legendary O’Toole family (Paul Jr still serves behind the bar) to the, well, legendary Duggan family, The Harbour Bar was voted The Best Bar In The World by The Lonely Planet, way back in 1891. Or thereabouts. Since then, The Harbour Bar has gotten better. And better.The bugger. and all sorts of fun shenanigans up in the attic (including, of course, GG’s favourite night out – The Hardy Har Comedy Club, on the third Thursday of every month), is it any wonder that pretty much everyone

And then, it’s Tuesday.

I blame the backroom. And that cosy fire. And that cat. And the way she might look at ya.

A little history… Established in 1872, The Harbour Bar was bought by James O’Toole in 1932, changing hands a mere 81 years later when the Joe Duggan threw his arms around what had become something of a struggling enterprise. But not for long… Once both a bar and an undertakers (which must have been handy for those who really wanted to drink themselves to death), it’s said that The Harbour Bar is immortalised within the pages of James Joyce’s Finnegan’s Wake. No one’s entirely sure, as no one has ever read the 676-page book to the end. Joyce frequented The Harbour Bar, as did the likes of Peter O’Toole (who left a moose head memento, which overlooks the main stage) and such luminaries as Laurence Olivier, Katharine Hepburn, Bono and Brendan Behan. And Paul Byrne. The sort of establishment you could spend a week in without missing a beat, or your family, The Harbour Bar is one of a kind. And if someone out there has a Michael Bay-sized forklift, I reckon we could easily sneak it over Bray Head one of these quiet, sleepy nights…

We can even drop a few people home on the way…