Who’s Up For The Greystones Outdoor Cinema Club…?

It was back in December 2015, when GG was MCing the turning on of the Christmas lights in Burnaby Park and Frozen was on the big screen that we were finally convinced that Greystones really should have outdoor screenings. 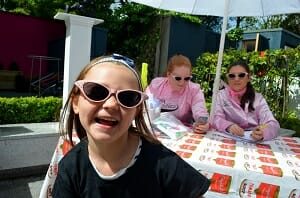 Having run a number of outdoor films for kids ourselves over the years – wearing our Greystones Film Club hat – it was always surprising to us that the town just didn’t do cinema al fresco. And so we set about finding a suitable spot for the summer…

It would have all been a pipe dream though if the Guide hadn’t been lucky enough to team up with the wonderful Ross McParland at Theatre Lane.  A man so damn wonderful that he instantly insisted that the event be a free one, and that he would foot the entire bill.

Not long after, Grease@TheCove became the first screening for the Greystones Outdoor Cinema Club.

Given that, when the dust settled, the goody bags had been given out, the spot prizes distributed, and the most magical night in Greystones for a very, very, very long time finally kicked into action, you’d be lucky to have any change out of €2,500, footing the entire bill was one hell of a generous – nay, magnanimous – gesture on Ross’ part.

And one that nobody would expect him to do all on his lonesome second time round. So, we did some simple maths. If we g0t 400 happy Greystonians together at a fiver a head – which would include the movie, the goodies, the freebies, the popcorn and the spot prizes – then, the cost on the night to Ross and Theatre Lane may not be quite so headspinning.

And so it came to be, as Mamma Mia! rocked the Cove, followed by the kick-ass comedy classic Some Like It Hot and then, the mother of all beach movies, Jaws.

And a beautiful Greystones tradition has been born. We’ll be aiming to make the likes of Halloween and Christmas that little bit special, if we get the weather, and we’ll certainly be back to full bloom in the spring. I reckon The Commitments for Paddy’s Day 2017 sounds like a winner…

In the meantime, here’s a little aerial footage, courtesy of Christian Byrne, of that debut Grease screening. Jump to the 5min mark for the good stuff.

Would love to join you! Great movie choice! could I get 4 tickets?

Count us in by x 5. Thanks Eimear

So happy that there will be another screening in the Cove, couldn’t make Grease as on crutches so watched longingly from above but I’ll be dancing at Mama Mia x6 . Thank you Paul, Ross and Dave.
Collette

What would we do without Paul & Greystones Guide?? !!! We all love you Paul!! Thanks to GG my social calendar is always busy, doing great things & meeting lovely people in our community. My friends and I had a really wonderful night at GREASE!!! We would love to do it all again & again!! So, Mamma Mia, bring it on!! A big WELL DONE to Ross & Paul on giving us all a wonderful night at our beautiful cove!!

Great idea, please count me in for 4 tickets

Add me to the list, great movie idea’s, “some like it hot” what a classic! but i am an 80’s child so……”Beuller, has anyone seen BEULLER”

Sounds like a great idea. Would love to go if date suits.

Hi Sir Paul, count me in too for four tickets please. I would.not miss it. I couldn’t care less what film is on. I just want to be there! 🙂

I would love this to be a regular event, still bummed I couldn’t make it to grease Hope I’m in town for mama Mia

We would love to come again ! Great night

Loved Grease thanks to all involved would love to see mamma mia and happy to pay €5 a head or more to ensure someone isn’t out of pocket, don’t mind jaws etc, they do limit kids going but that could be counteracted with a kids movie another time (although in a toss up between jaws and the abyss it has to be the abyss !!)

Sounds fab! Mamma Mia, Priscilla Queen of the desert, gremlins, goonies, labyrinth, or anything else! We’d be a x6, sign me up!

Too long, in truth. Many, many great films out there, but you have to think about the setting…

Sign me up. Super super idea. €5 for a great nights entertainment is nothing.

It was a great night, I wouldn’t mind paying, €5 is a reasonable price. Can’t wait for the next one

Brilliant Idea. Count me in for the membership

Count me in Paul!

I heard it was a great night so well done to all involved. I would love to bring the family to the next one and join an official club or whatever is required

Would love to join too! 4 tickets please! Love all the movie ideas.. “Ferris Beuller,s day off” or Gremlins as other options!?

Definitely in, and the other half for outdoor cinema.
However I will have to be a killjoy and skip Mamma Mia – I just can’t do it, I hate it with a passion!

Will it be musicals only?

We hope to have at least one more after Mamma Mia! Possibly Jaws (although that limits the age group), or quite possibly Some Like It Hot. We’ll be putting our thinking caps on and try and find something that surprises people a little…

Yes would love to join

Sounds like a fabulous night was had..would love to attend the next one x4 please

I’d love to experience this, make a great summer memory for the kids too!
Count us in please

Yes please! Some brilliant suggestions on here – particularly love the idea of Jaws at the Cove 😉

Screened Jaws recently at the Greystones Film Club, and it’s surprisingly wordy, and slow. Despite the perfect setting, it’s not, on the whole, a fun film. It’s a truly great film, but these outdoor screenings are more party than serious cinema. Jaws is in the running, but, reckon comedies play best when you’re outdoors with a large group…

I’d love to join the outdoor cinema club. Thanks, Ann

Love to see another movie at the cove, what about JAWS! Love to be a member of the outdoor cinema club. Suzie O’Toole

I would love it. We throughly enjoyed friday night. Count me in!

Oh would love it. Had a fantastic time at Greece.

Yes please would love to see Mamma Mia , I would take 4 tickets. Thank you.

Big Thanks to Ross for a brilliant night on Friday. We would be more than happy to pay for any event, maybe a couple more euro a head would get a toilet??

We’d love to join in – two of us please

Great idea Paul. We’ll make ourselves available to do it again

I’d love it, let’s face it, it’s the only thing Greystones has been missing 🙂
I’d love to see Dirty Dancing, The Shining, Crybaby, The Exorist and Rocky Horror Picture Show But I suppose there’ll be kiddies there so maybe Ghostbusters and Hotel Transylvania

Jaws and The wizard of Oz

I’d definitely be up for that. And a fiver is still a very reasonable price for a great night!

Yes really enjoyed “grease”. Would love to do it again. Mamma Mia would be fabulous

Sounds like a plan! Just heading to the attic to find my flares and platforms.

Count us in as well. Sounds great!

I would love to join

Sounds like a wonderful plan. Thinking Dirty Dancing 5 Foley’s would love to redo the amazing experience

Woo hoo. I’d like membership too please Paul. So would my Mam and two sisters. Mama Mis sounds great, I also love Aladin. Thanks a mill x

We would definitely be interested in attending again. If admission is a 5er well that’s as cheap as chips for a fun night. Count us in.

Home On The Kitchen Range