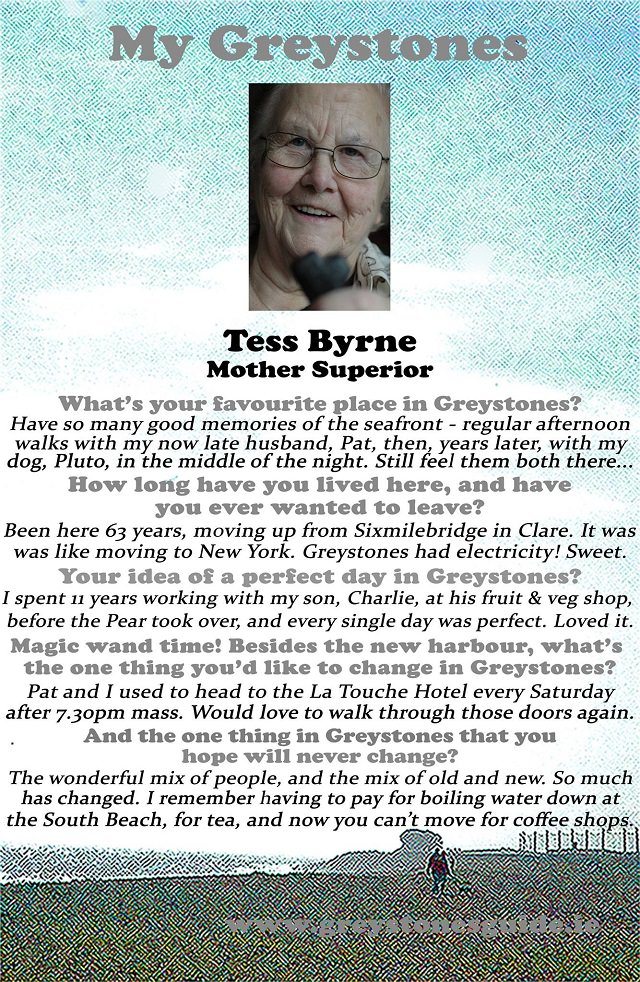 What can we say about Teresa Bartholomew Horatio 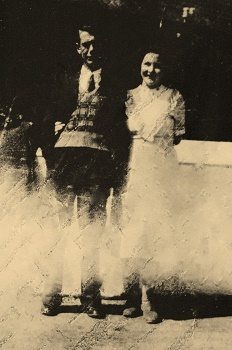 Mary Elvis O’Shaughnessy that won’t get GG sent to bed early without any scoops…?

Suffice to say, if the woman can spawn someone like our fine selves – and ten other Blackberry Lane eejits besides – the 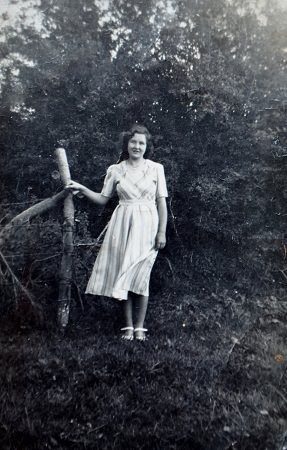 She’s a tough cookie, Tess Byrne, having spent a lifetime pushing kids, and a week’s shopping, up a hill that more closely resembles The Wall of Death than a country lane in deepest, darkest Delgany. But the climb was always worth it, taking you a quarter-mile and about 50 years back from the rest of the world.

Hailing from Sixmilebridge down in the wilds of County Clare, 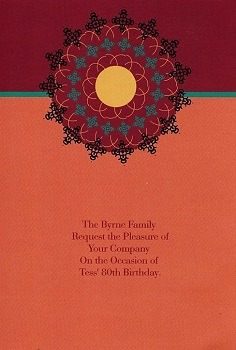 Tess Byrne had the good fortune to fall head-over-high-heels for one Patrick Joseph Byrne way up here in Wicklow 4, the pair getting married on Sunday, June 26th 1951.

The rest, as they say, is hysteria. Eleven kids in a small mud cottage without running water caused plenty of sparks, farts and laughter. 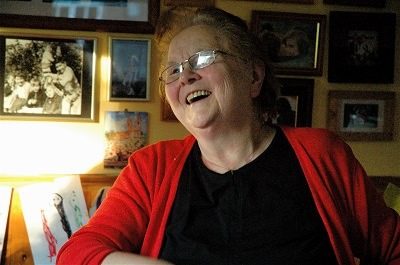 Rather than try and encompass such a life here, we will instead resort to the not-too-distant 80th birthday speech GG prepared for Ma Byrne back in October, 2011. If you know the woman, you’ll get all the gags… 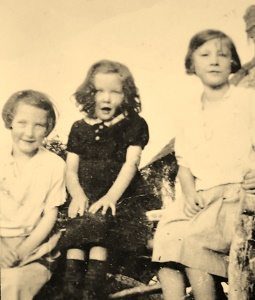 a lot of days. I asked Mick to calculate just how many, and he came back to me a day later with the answer; “loads and loads”.

Teresa Bernadette O’Shaughnessy was born to Pat and Elena on 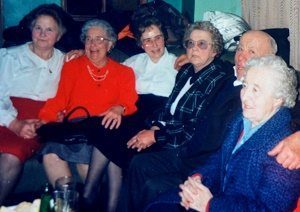 October 25th, 1931, halfway between Sixmilebridge and Kilkishen in County Clare.

It was a Sunday, it was midnight, and it was Pat and Elena’s 11th child. Mum took that number as a challenge…

Tess has lived through many changes over the last 80 years. The 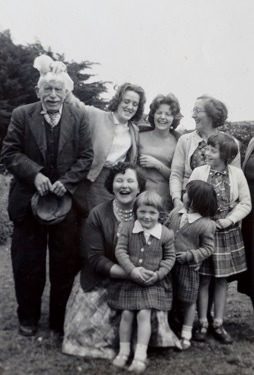 2nd World War. The birth of Elvis. The death of Elvis. Decimilization. The launch of Apollo 11 to the moon. The launch of RTE2. The many faces of Michael Jackson, from black to white and then, suddenly, blue… then purple… and finally, a milky shade of grey. It’s what he would have wanted.

Over all that time, mum has seen Ireland go from being a backward, 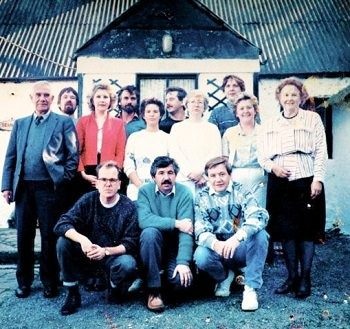 Her own life changed dramatically when, at the age of 16, she accompanied her sister Margaret up from Clare to Wicklow. Margaret was visiting her boyfriend, and future husband, Jack. 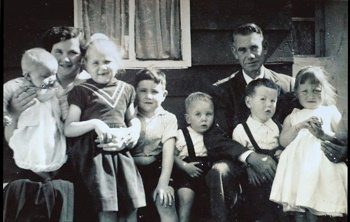 The one and only Patrick Joseph Byrne, Tess’ first and 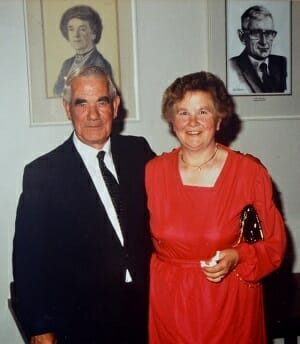 only boyfriend. In her own words, she got lucky.

The star-crossed lovers couldn’t be together immediately though, and Tess headed back to Clare, plotting her return over the next three years. During those years apart, Tess wrote Pat a total of 3,946 letters. In return, Pat wrote Tess a total of 2 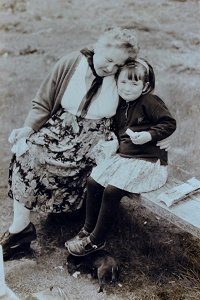 letters. And one of those was simply asking for the loan of a fiver.

Eventually, Tess told her parents that she was going out for a walk, and 148 miles later, she had made her way up to Blackberry Lane. On June 25th, 1951, Pat and Tess got married.

They moved into the Byrne family home, sharing the 5-room old mud cottage 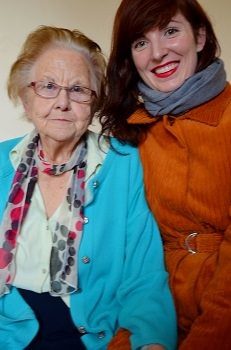 with Pat’s cantankerous widow mother, Catherine. Or as mum liked to call her in later years, “That oul’ bitch… God rest her soul”.

Like any good young Irish Catholic family, Pat and Tess took one look at their tiny, cramped, 2 1/2-roomed miniature cottage and decided what it really, really needed was 11 strapping big kids. 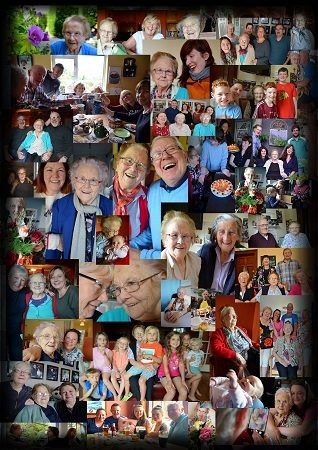 child of the brood. Take that, Elena.

Just about all of them are here tonight. Well, the good ones. Which gives you some idea of the assholes who didn’t make the cut.

People have said that we should try and get all 11 kids back together for tonight, but it’d be easier to reunite The Beatles.  And with the Fab Four reunion, there’d be a lot less blood and guts, and shovels, involved.

We all shared a magical childhood though, somewhere 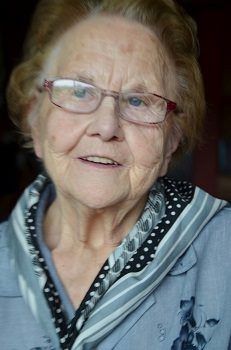 between The Waltons and The Munsters.

No matter what happened to us in life, each of us knew that mum would always be there, with a cup of tea in her hand, some corned beef & sugar sandwiches, and, occasionally, the bail money.

What sort of woman is Tess? Well, let’s look at those early, formative 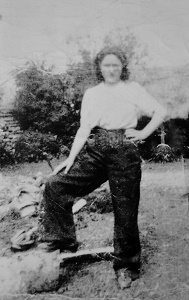 years.
At the kid who, upon seeing her dad pop into visit a neighbour, Paddy Casey, unbridled his waiting donkey from its cart, stuck the cart through a gate, and then hooked the bewildered donkey back on. I won’t tell you the words Paddy Casey used as he and Pat O’Shaugnessy stood there, scratching their heads, but his false teeth went flying…

Or there’s the 15-year-old girl who, tired of the wind blowing her skirt up over 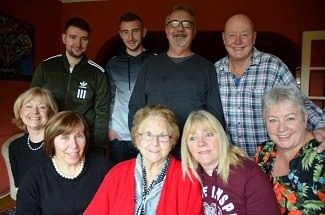 her head when she was cutting turf – and tired of the wolf whistles that would ensue – bought a pair of dungarees and cut the top half off. Becoming the first woman in Clare to wear trousers. The parish priest 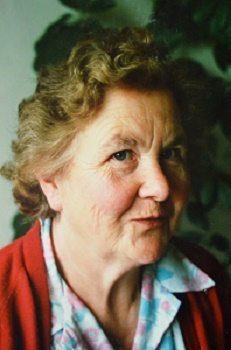 even called down to the house to try and stop the madness, but the teenage Tess was having none of it.

Mum is full of such stories. Indeed, as anyone who knows her will tell you, she’s got thousands upon thousands of stories. She bore 11 children, 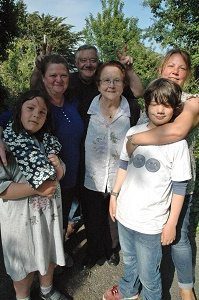 and continues to bore us to this day…

And let’s not forget, through her buddy Saint Anthony, she’s got a direct line to God. Tess was granted one great big birthday wish from the man above to mark her 80th.

Delighted and excited, Tess said, “God, I’ve got a load of relatives and friends travelling from all over the place for my big party – do something about the weather”. So, 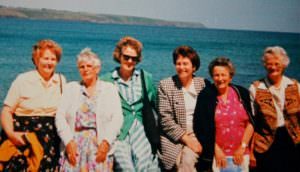 God sent some biblical floods. Nonetheless, you all made it here tonight. 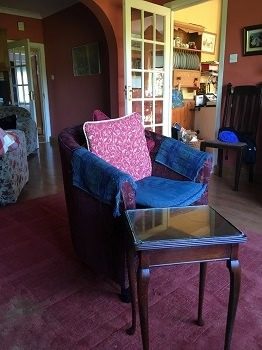 The ones with a good heart, a quick wit and that certain twinkle in the eye…

Tess Byrne has been on this planet for 29,224 days, and she made each and every one of those days that little bit better.

Blackberry Lane – technically, a slightly-angled cliff – to pushing her mates in wheelchair rallies around the ICA hall, mum has never stopped, and never slowed down, in her pursuit of happiness for others…

They say the first 80 years are the hardest, so, from hereon in, Mum, let’s make the rest of them all holidays, full of joy and 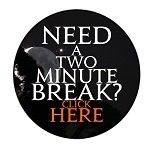 wonder, of hot tea and cool sandwiches, of chasing Thomas and Little Tess around, around the garden…

Thank you for the days, mum, those endless days. And give our love to dad…

Santa’s Got A Brand New Postbox

Hi Paul. So sorry for your loss. My deepest sympathy. May she rest in peace

I am so sorry for your loss. What a beautiful piece you’ve written in her honor and thank you for sharing. RIP

So sorry to hear of Tess’ parting, she was such a cheerful person who had a chat and a smile for everyone. Tess was interested and involved in so many things in Delgany and made a wonderful contribution to village life there and in Greystones. She will be greatly missed. My condolences also to all her family. RIP Tess.

Sincere condolences to all the Blackberry Byrnes. She was obviously much loved and will be greatly missed. RIP