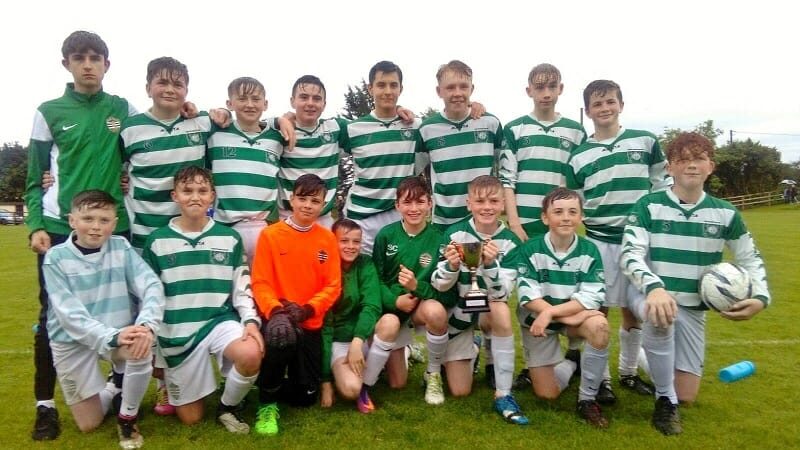 Ah, tis a proud day indeed for the boys in Greystones United’s Under 14s team…

Going up against the mighty Roundwood at Finn Park, our boys managed to win the way that narrowest of victories, 1-0.

It was enough for Greystones United U14’s to win the cup.

Greystones United U14WA team lifted the Wicklow Premier Cup U14 Cup on Thursday evening at a wet Finn Park in Kilcoole when they beat Roundwood 1-nil. The match drew a sizeable crowd of supporters from both teams and the pitch in Finn Park was in excellent condition. 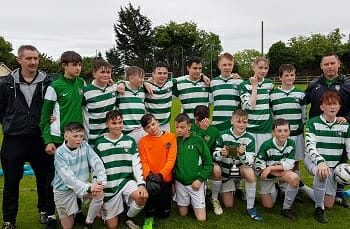 Greystones started well and scored inside 10 minutes with good work from Ben O’Neill who put in a low cross which Michael Gray managed to finish expertly into the corner out of the reach of the Roundwood keeper. Roundwood inevitably applied pressure but without creating any real chances apart from some very dubious free kicks one of which was brilliantly touched onto to the crossbar by the Greystones goalkeeper Ross McParland. At the other end Adam Longmore pulled the strings making some great passes to create shots for Shane Collins and Oscar Kinsella.

In the second half, Greystones, expecting an onslaught from Roundwood, coped comfortably with the pressure from the opposition. Indeed, Greystones should have had a penalty when the centre forward Michael Gray was clean through on goal only to be pulled back by the Roundwood centre half. Everyone in Finn Park seemed to see it including the two linesman but the referee never gave it. Another chance, this time Daniel Ilchenko crossed for Michael Gray, who was unfortunate to miss at the front post. Rory Barry also seen his header just go by the post. As time was running out, Roundwood forced a corner and threw everyone, including the goalkeeper, into the mix. However, the Greystones defence of Cian Evans, Sean McCormack, Callum Archer and Aaron Keddy defended resolutely as they had all throughout the match, and cleared the ball once more. With the Roundwood goal empty and Roundwood team rushing frantically back to defend their goal, Daniel Ilchenko used his pace and almost caught the Roundwood defence out but the referee blew for another dubious free kick. A great win for the Greystones team especially when you consider it’s their first year together!

Congrats to each and everyone of the players. Even the lazy ones who didn’t really try that hard.

Feeding Time With Sammy The Seal