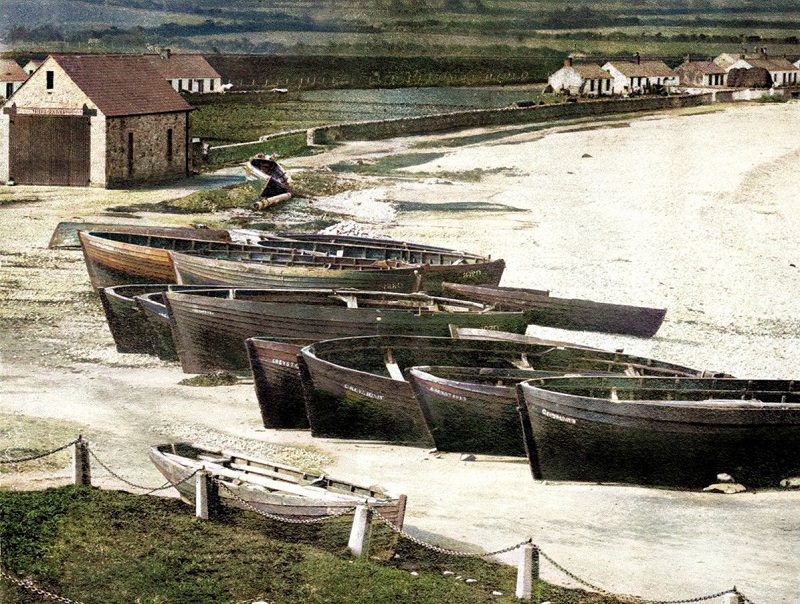 The lifeboat house in the 1870s

ollowing on from his January 2021 article about the birth of the Greystones Coast Guard in 1821, the local historian marks another very important seafaring anniversary for the town… 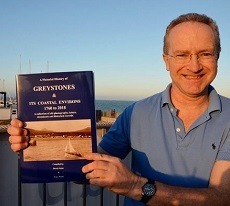 It was 150 years ago today, on August 3rd 1872, that fishermen, residents and a number of invited dignitaries thronged Greystones for the launch of the lifeboat, Sarah Tancred, the 233rd lifeboat to be placed by the RNLI around the coast of Britain and Ireland. 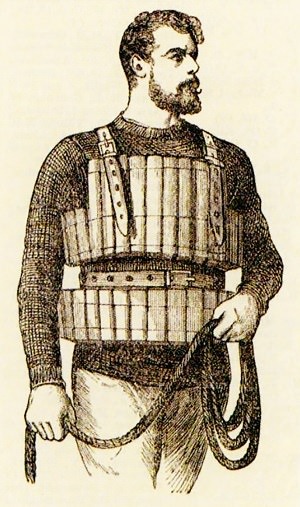 the railway station to the beach on a stout four-wheeled truck dragged by six horses. Her crew was on board, as hardy a lot of salts as one would wish to see, all of them in red Guernsey shirts and cork jackets’.

The report in The Warder dated 10th August 1872 noted that the ‘white and blue painting of the vessel contrasted harmoniously with the red flags displayed by the crew and the rosettes of coloured ribbons and flowers worn by the six horses yolked to the wagon’. The dignitaries included Lady Meath, Lady K. Brabazon, William R. La Touche, William R. O’Byrne (High Sheriff of Wicklow), Captain Hutchison (Kingstown Harbourmaster), Captain David Robertson R.N. (one of the inspectors of the RNLI), that latter acting as superintendent for the whole proceedings, ably assisted by Richard Doherty( who served as Chief Officer of the Greystones Coast Guards from 1868 until 1878).

The article noted that Lady Meath ‘advanced towards the lifeboat and christened her in the usual manner by breaking a bottle of wine against her stern, saying at the same time, “God Bless the Sarah Tancred”. After the singing of The Lifeboat Song by the school children, the car was dragged close to the seashore and, the vessel being let loose, she glided swiftly and gracefully into the water amidst the cheers of the spectators and crew. The lifeboat rode buoyantly over the heavy ground-swells which in all kinds of weather prevail along the Wicklow coast and in a few minutes, in the hands of her able and willing crew, were seen ploughing gallantly through the surf out towards the sea’. 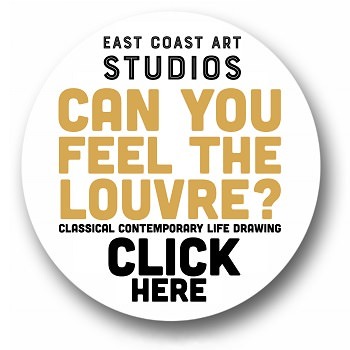 While shipwrecks along our stretch of coast were not a common occurrence, there were occasional incidents which resulted in the loss of ships and sadly lives. Just over a decade earlier, in the great storm of February 1861, the 200 ton brig, Mary, laden with coal, was wrecked on the shore at Greystones with the loss of all five crew members. In 1871, J.J. Tancred of Pearville, Co. Dublin bequeathed a legacy of £1,000 in his will to the RNLI on condition that it would place a lifeboat to be named after his late wife, Sarah, in the vicinity of Dublin.

J.J. Tancred was born and reared within two miles of Delgany and had spent a large portion of his life in the neigbourhood of Greystones and Bray. The Precis Ledger for the Greystones Lifeboat, held at the RNLI archives in Poole, covers the period from 1871 up until the station’s closure in 1894 and contains the reports pertaining to the station made by the Institution’s inspectors. 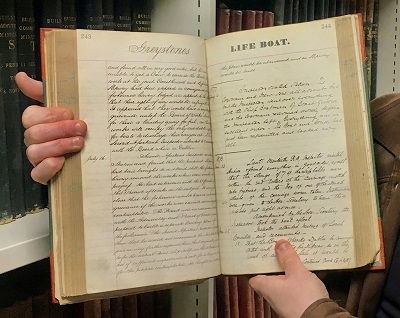 The Precis Ledger for Greystones Lifeboat

In September 1871, the inspector visited Greystones and interviewed the Chief Officers of both Bray and Greystones Coast Guard Stations. The purpose of the visit was to ascertain the best location for the establishment of a new lifeboat station to be located along the coast between Kingstown (Dun Laoghaire) and Wicklow. Greystones was duly selected.

The inspector visited William La Touche at his home, Bellevue, who as the local land owner immediately threw his support behind the proposal. The La Touche family had been instrumental in supporting the construction of the original Greystones pier in 1847 and William La Touche expressed his readiness to grant a long lease on a site upon which to build a lifeboat house, as well as undertaking to form a local committee to establish a lifeboat station at Greystones. 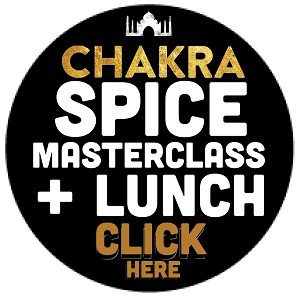 On 28thDecember 1871 the committee accepted an estimate of £216 and 5 Shillings from Mr T. Connolly for the construction of the lifeboat house. The photograph on top here is one of the oldest known photographs of the harbour area, having been taken in the 1870s. It shows the original basic roof and gable of the lifeboat house built during the first half of 1872, prior to its subsequent alteration in 1879 by Thomas Evans who added the kneelered gables and granite finials to the roof, the latter of which survives to this day on the northern end of the building.

The large fishing boats pulled high up on the beach, known locally as snuffs, were mostly built by Thomas Evans’ father, Henry Evans of Emily House on Trafalgar Road, the first slate-roofed house in Greystones.

The RNLI had exacting standards for the construction of their lifeboats – double diagonal mahogany planking, fore and aft stems to be of single pieces of English oak, keel to be made from a single piece of American elm, etc. 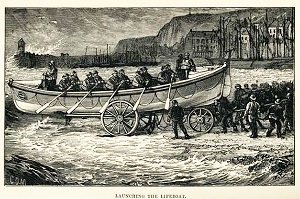 During the 19th century, around 90% of the lifeboat fleet was built by boat yards on the Thames. The order for the construction of the Sarah Tancred was placed on 15th September 1871 with Woolfe & Son of Shadwell, on the north bank of the Thames just downstream of Tower Bridge. She was one of 143 lifeboats built by this yard, slightly higher than the 115 built nearby at Limehouse by Forrest & Son (who built the second Greystones lifeboat, Richard Browne, in 1886). The 33-foot long 8 foot wide ten oared Sarah Tancred, which cost £284 & 15 Shillings to build, passed her harbour trials for stability, self-righting and self-ejecting of water at Regent’s Canal Dock at Limehouse in June 1872. 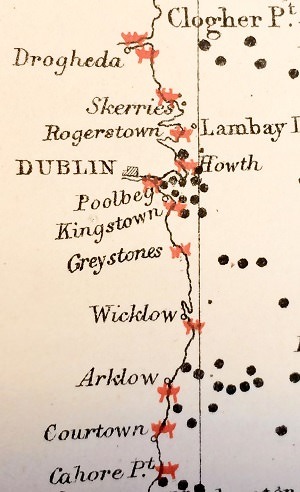 Such was the prestige associated with the establishment of new life boat stations around the coasts of Britain and Ireland, it was customary for new lifeboats and their carriages to be afforded free passage to their destinations by the relevant shipping and railway companies. The British & Irish Steam Packet Company duly obliged and delivered the Sarah Tancred from London to Dublin from where The Dublin Wicklow & Wexford Railway Company brought her to Greystones. She was one of only two lifeboats delivered to Ireland that year, the other was sent to a new station south of the Boyne near Drogheda.

Both new stations were included on the map published by the RNLI in 1872 (the black dots indicate known wrecks at sea).

The RNLI archives held at Poole do not have a complete record of the Coxswains of the Greystones Lifeboat Station from its establishment in 1871 until its closure in 1895. They disclose that John Doyle served as Coxswain from 1876 until his tragic drowning in Greystones harbour in 1892 attempting to assist the coal schooner, Mersey, following which Edward Archer took over as Coxswain. 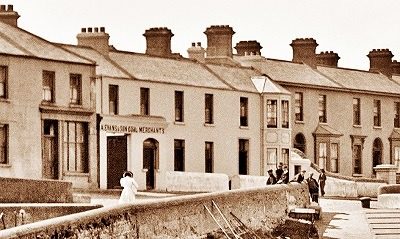 However, in a report on the launching of the second Greystones Lifeboat, Richard Browne contained in The Dublin Daily Express dated 3rd December 1886, it noted Arthur Evans as being a ‘former coxswain’. Arthur Evans, aged 40 when the Sarah Tancred was launched, an experienced mariner and more latterly a coal importer (and later holder of the contract to servicethe Codling Bank Lightship off the Wicklow coast) was well qualified for the role. 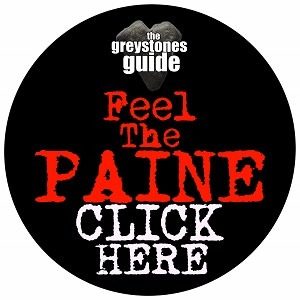 He resided at the harbour in Wavecrest next door to the telegraph office at Rockport and thus would have been well positioned to muster the lifeboat crew speedily in the event of a telegraph message calling for her assistance being received.

During her years of service (1872-1886), the Sarah Tancred was launched on four occasions, saving a total of four lives. She was replaced by the Richard Browne, 4 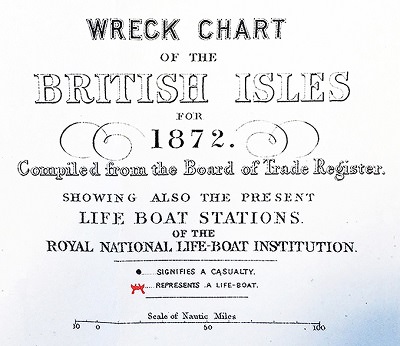 feet longer at 37 feet and 12 oars versus 10. She was not launched during her 9 years of service up to the closure of the Greystones Lifeboat Station in 1895.

There are plenty more historical nuggets told in Gary Paine’s glossy 296-page historical archive of the town, A Pictorial History of Greystones & Its Coastal Environs 1760 to 2018, which is still available from Greystones Antiques beside the train station or to order online for €35 plus postage.

You can check out the full gallery of the above pics in hi-res here, and our 2018 interview with Gary right here.

Did Covid Cancel Your Birthday?

Have You Seen Damien?