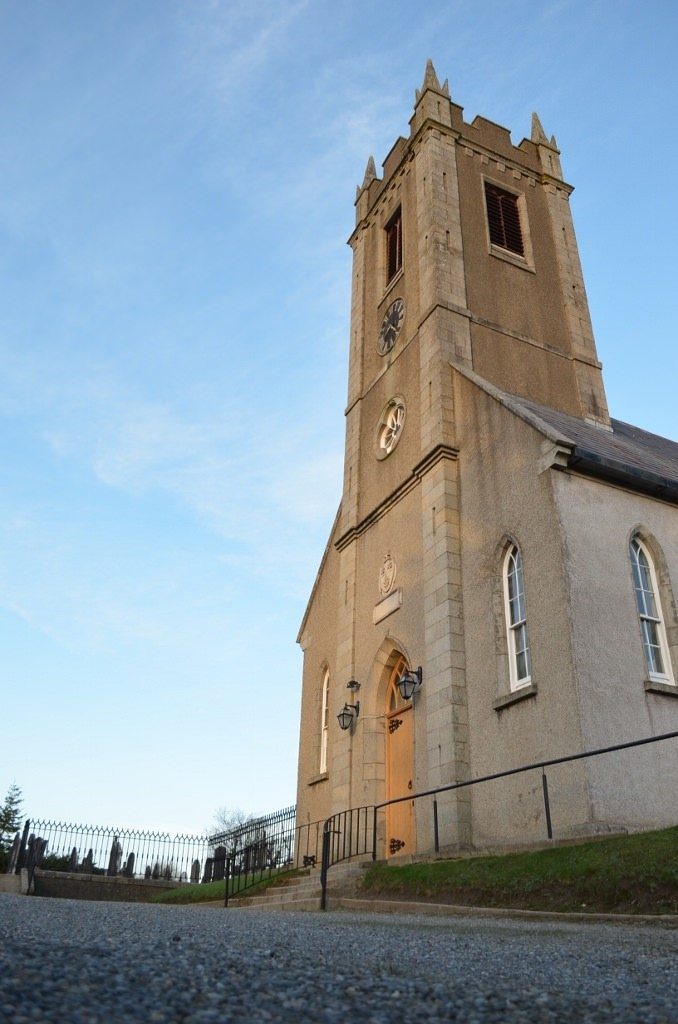 It’s Delgany’s highest landmark – even if the Catholic church up the road is, 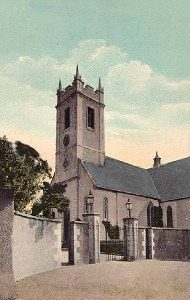 naturally, on higher ground – and Christ Church certainly casts a long shadow over the village.

And thankfully, historian Patrick Comerford has taken the time out to chart that colourful history on his fine blog.

Take it away, young Patrick…

I was preaching in Christ Church, Delgany, Co Wicklow, last week [10 April 2016], at the invitation of the Rector, my friend and colleague, the Revd Nigel Waugh. However, I never got 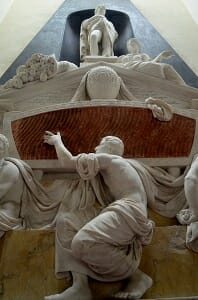 around to describing this unique church and its story.

Delgany is about 25km south of Dublin, and is surrounded by wooded hills and the Glen of the Downs. The area traces its story back to Saint Mogoroc, or Saint Moghoróg, who is said to have lived a hermit’s life there in a cell in the sixth century. He was a friend of Saint Kevin, and attended Saint Kevin on his deathbed in Glendalough in 618.

There is evidence of an early Christian settlement from the seventh century in a monumental high cross that is now missing its head, but the granite shaft is still standing with an inscribed prayer. King Ugain of Leinster defeated King 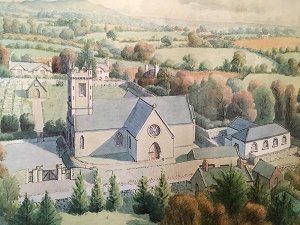 Sitric of Dublin at a battle fought at Delgany in 1022. By the Middle Ages, the parish church in Delgany was the principal church in the Barony of Rathdown, and the 13th century church was in use until the end of the 17th century or later.

The mediaeval Rectors of Delgany included Donald Mackanill, who was ‘illegitimate’, and was said to have “no hope of getting justice in the City or Diocese of Dublin”. Later rectors were also Vicars of Kilcoole, and the two parishes have been joined since the 17th century.

The old church had fallen into disrepair when Peter La Touche offered to a build a new church. Christ Church cost £5,000, and was designed by Whitmore Davis. The church was built at the sole expense of Peter La Touche, was completed in 1789, and was consecrated on July 31st, 1789.

This is a light Gothic building with a steeple rising 30 metres over the west entrance, and containing a clock and bell. A stone tablet bearing the La Touche family coat-of-arms is inserted beneath the dial plate of the clock.

The architectural style of the church is later English Gothic. Inside, there is a gallery above the porch at the west end. The church is a very pleasing design, but its orientation is unusual, for the East End contains a lavish white marble monument erected in 1790 to the memory of David La Touche, the father of Peter La Touche. The marble monument was designed by the Irish sculptor, John Hickey. On top of the monument is a figure of David La Touche, with Peter La Touche’s wife standing to one side, and the figures of David’s sons, David, John and Peter, at the base. 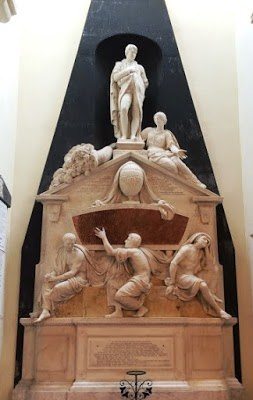 Because of the overwhelming presence of the La Touche monument, visitors could easily miss some of the other monuments and the beautiful stained-glass windows. There is a brass plate remembering a kinsman of the Duke of Wellington, Major Edward Victor Colley William Wellesley, MC, of the Royal Engineers, who died at home almost 100 years ago on 2 October 1916, presumably of wounds received during World War I. 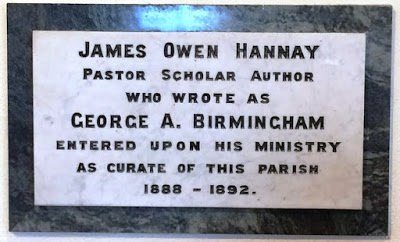 Another monument remembers the Revd James Owen Hannay (1865-1950). He was a curate of Delgany (1888-1892) before going on to an interesting career in which he was a lecturer in Trinity College Dublin, an army chaplain in World War I, a canon of Saint Patrick’s Cathedral, Dublin, and an embassy chaplain in Budapest, before becoming a vicar in parishes in the Church of England. He was prolific writer and is still remembered for the novels he wrote under the pen name George A Birmingham.

The vestry walls are lined with portraits and photographs of former curates and rectors of the parish, including Joseph Stock (1740-1813), who was Rector of Delgany (1789-1798) at the same time as he was Headmaster of Portora Royal School, Enniskillen (1795-1798). He was Bishop of Killala (1798-1810) during the 1798 Rising, and despite being imprisoned in Killala Castle by the French invaders, he was regarded as a sympathiser of the United Irishmen. Later he became Bishop of Waterford and Lismore (1810-1813). 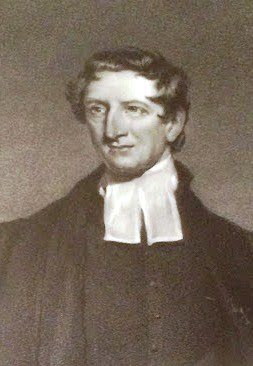 There is another 1798 connection with Canon William Cleaver (1789-1860), who was Rector of Delgany (1819-1847). His father, Euseby Cleaver, was Bishop of Ferns in 1798, when his palace was plundered by Wexford rebels. Euseby Cleaver later became Archbishop of Dublin (1809-1819), but he was so disturbed by the events in 1798 that he was psychiatrically ill for much of his time as archbishop, and the Archbishop of Cashel was appointed his coadjutor in 1811.

The Revd David Digges La Touche, probably a member of the Marlay Park branch of his family, was a curate of Delgany in 1771, almost 20 years before the La Touche family built Christ Church in 1789.
The La Touche monument is a tribute to David La Touche, who in 1752 bought a 300-acre estate at Ballydonagh, which he renamed Bellevue. There he built a new house at a cost of £30,000. Later additions were the work of his son Peter La Touche, who inherited Bellevue in 1785. 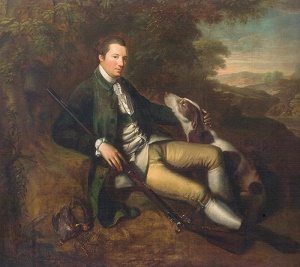 In 1766, Peter La Touche married Rebecca Vicars and they had a townhouse in Merrion Square. When Rebecca died in 1786, Peter moved to Bellevue and two years later he married Rebecca’s cousin, Elizabeth Vicars.

Elizabeth La Touche was known both as a hostess and for her charity works. She opened an orphanage and school for girls in the grounds of Bellevue, and she supported the children until they were old enough to look after themselves. She also ran a girls’ orphanage on the North Circular Road, Dublin. 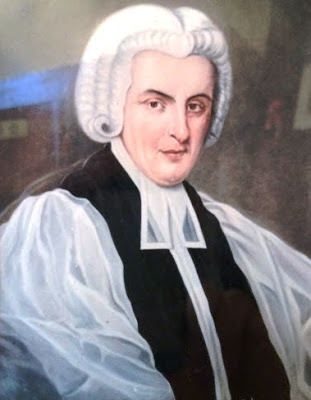 She persuaded the infirm Dean Walter Blake Kirwan (1754-1805) to preach the annual Charity Sermon in Saint Patrick’s Cathedral in 1801. But the dean was so feeble that day he explained to the congregation he was unable to preach, and promptly fainted. Those who were present were so overcome that they donated over £1,100 for the orphans, a huge sum for the time.

In 1790, Peter La Touche acquired the lands of Upper and Lower Rathdown which became the site of present-day Greystones. He improved the houses and grounds at Bellevue and Luggala, a hunting lodge in the Wicklow Mountains. He was active in many charities in Dublin and Wicklow. When he died at the age of 95 in 1828, he directed that he should be buried in the new churchyard in Delgany “with as little expense as decency will allow.”

During his time, the population of Greystones expanded in the 1850s and 1860s as a result of the extension of the Dublin and Kingstown Railway line to Greystones in 1854-1856. The developments in Greystones meant that Christ Church in Delgany could not meet demands, and so he gave the site for a new church in Greystones, which was built in 1857 as a chapel of ease of Delgany Parish.

When Peter David La Touche died in 1857, the estates passed to his brother William Robert La Touche, who died in 1892, and then to his next brother, Octavius La Touche. But the family finally left Bellevue in 1913, the house fell into decay and it was pulled down in the early 1950s.

If It’s Good Enough For The Italians…