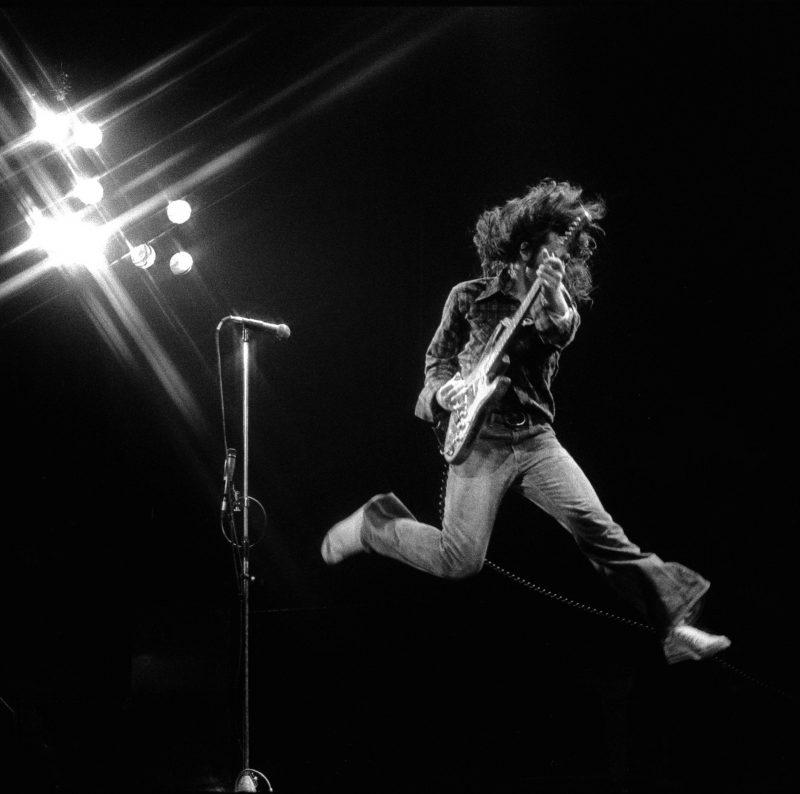 Even without seeing the man’s face in the picture above, 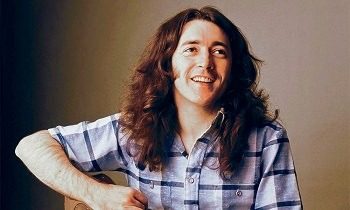 The checked shirt, that beat-up Strat, the denim, the near- 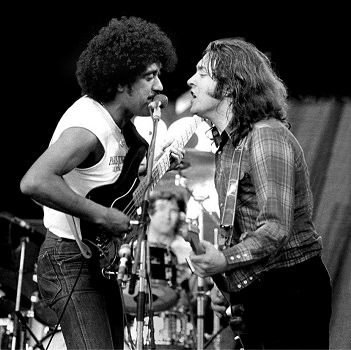 demonic euphoria, it can really only be one man.

Born in Ballyshannon, County Donegal on March 2nd, 1948, but reared and rarefied in Cork, William Rory Gallagher is The Quiet Man of Irish rock history. Despite having sold over 30 million albums worldwide, the man was too publicity shy to ever truly become a t-shirt, and 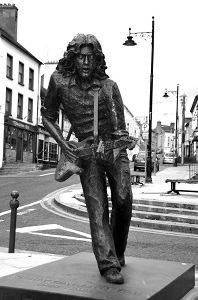 too dedicated to ripping the blues a new one live on stage to ever become hip or trendy.

Which is exactly why the likes of Kevin Power adore the man today. He may have passed away in 1995 – due to complications from a liver transplant – but Rory Gallagher still strikes a chord today, not only with his fellow countrymen but with lovers of caution-to-the-wind, balls-to-the-wall R&B all 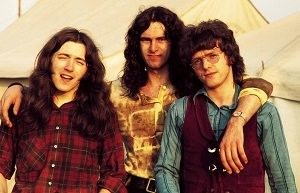 around the world. From his early years with the Cream-inspired power trio Taste to his string of axis-shifting 1970s solo albums, as Gallagher’s fame grew, he withdrew more and more into the music he loved.

Just how much Kevin loves, honours and pays tribute to his idol is plain when you consider the fact that he formed Crest Of A Wave, a band 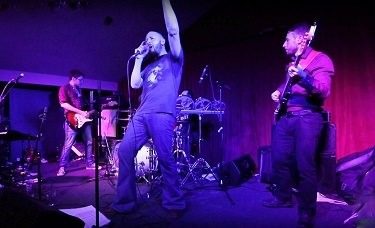 who like to turn Rory Gallagher up to 11 for a whole new generation.

Playing The Hot Spot this Friday, March 6th, we caught up with young Mr Power to find out just how he first got a taste for the 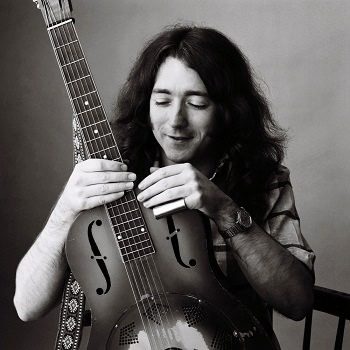 My Dad first introduced me to Rory Gallagher. Around age 15, I heard Taste’s Blister On The Moon blaring from speakers in the kitchen. “This is Taste, Rory Gallagher on guitar”, my dad informed me, and I was gobsmacked! Here was an incredible guitar virtuoso, musician, songwriter that I had never heard of 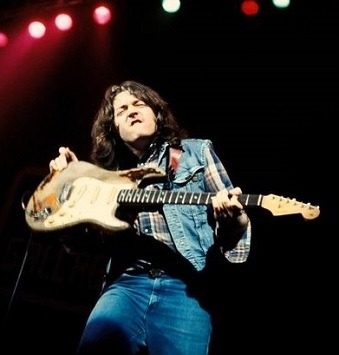 before, and he was Irish!

A few years later, I went to the Rory Gallagher Festival in Ballyshannon, and saw a number of tribute bands (Barry Barnes’s Sinner Boy, Seamie O’Dowd, Moonchild, Johnny Gallagher, later on, Deuce, Fresh Evidence) blasting out Rory’s rocking bluesy tunes in sweaty pubs heaving with fans of all ages. This is where Rory’s music really came alive for me, played live in front of a live audience.

I thought to myself, this is class! I want to do this. Fast forward 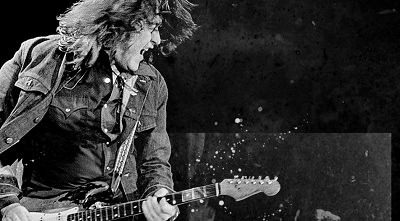 a few more years and we are finally doing it, and hopefully doing Rory some justice, no easy feat.

With Crest Of A Wave, we try to take you on a journey through Rory’s 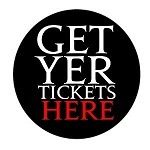 back catalogue with some Taste classics, deep cuts from the Irish Tour 1974 and some of Rory’s marvellous acoustic styles. And below, lead singer Johnny and lead guitarist Simon pick some of their favourite Rory tunes.

Bottom line, Rory did all the hard work – we’re just lucky that we get to play his music.

Blister On The Moon (Johnny)
Delving into Rory’s past and the Taste opened up a world of wonders. Albums overflowing with hard blues-rock that would easily stand up against the best that Clapton, Page and Hendrix had to offer. The album Taste opens with a hard-hitting pulse raiser, which could describe the feel of the record industry at the time. Rory may have felt that by signing for a label and having a manager he was relinquishing some of his control and that he was reluctantly agreeing to conform somewhat. The song finishes with the line ‘We’re in command, you tiny fly/We’ll crush you till your dead‘. Maybe this was the message Rory felt he was getting from the management and after two studio albums, two live albums and a host of band members, he decided to go it alone.
Only the paranoid survive. Being watched like a hawk, fear of his woman clearing out his savings, wondering why he was the last man at the bar consumed with the blues. Every time he played, Rory described scenarios with vivid clarity. Using his famous Strat, he had the ability to bring these images and emotions to a height before crashing them into your consciousness where, if you are lucky like me, they will stay for a lifetime.

Cradle Rock (Johnny)
Picture yourself sitting in the front row of a crowded auditorium. The electricity arcing from person to person in the crowd. A man with a light Belfast accent announces, “Ladies and Gentlemen, Rory Gallagher”. The sound of a seasoned Stratocaster being fine-tuned before being squeezed and struck like no other instrument before. The drums kick, Lou Martin punches the keys. Gerry McEvoy pounds on the bass. Energy, like plasma escaping from the surface of the sun, evaporating everything in its path, leaving only the warmth and power of each note and lyric. “If I was a cradle, then you’d let me rock…”

Tattooed Lady (Johnny)
Love at first listen; how could you not be encapsulated with that sound, and that is only with the lid of the treasure chest ajar. For me, it started with the Irish Tour 1974 album, not the worst place to start, considering it was pretty much the album smack bang in the middle of a life’s work regrettably cut short. No matter which way I turned, images of bearded babies, hardships, unrequited love and mother-in-laws painted a picture of an artist with an unmatched talent.

I Fall Apart (Simon)
This for me exemplifies Rory’s range as a musician and songwriter. Best known as a raucous blues rocker however, he could produce work that was both tender and thoughtful. The production on this track is remarkable. The band sounds crisp and tight yet still somehow loose and live. The solo is one of my favourites; melodic, dynamic and above all tasteful (excuse the pun).

As the Crow Flies (Simon)
Rory was a musician who understood the roots of popular rock music better than anyone. On this track (a reworking of a song by Tony Joe White), we experience Rory’s acoustic playing – which, of course, was second to none. Alternate tuning, finger picking and slide playing are some to the techniques Rory employed to evoke images of the faraway and the long ago. It is rare to hear one voice and one guitar sound so big that they could captivate a full house at the Cork City Hall, but that is what happened on January 3rd 1974.

Playing The Hot Spot on Friday, March 6th at 9pm, you can find out more about Crest Of A Wave on Facebook here and Instagram here, or get in touch on crestofawave2019@gmail.com. In the meantime, to get you in the mood…

Boom! Now, go grab your ticket here. And do it quick, ya feck. Pics courtesy of Irish Film & Television Services.

Paddy’s Day Has Been Cancelled