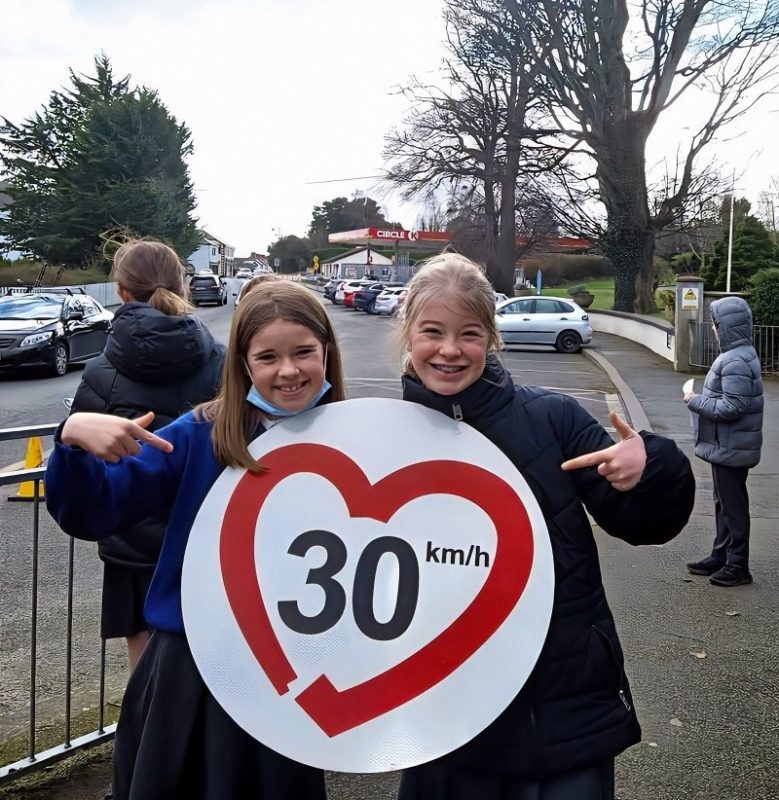 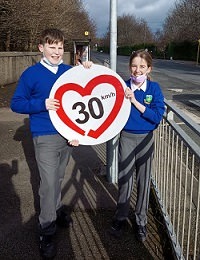 they backed the global Love 30 campaign.

And as you may have already gathered, the campaign is all about motorists taking the pedal off the metal when it comes to driving through busy areas. 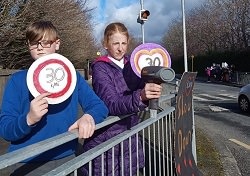 Such as, you know, schools. Where children tend to congregate. Reluctantly.

To mark a different kind of Valentine’s love, pupils and teachers from both the junior and senior primary schools in Kilcoole created a display of powers, banners, masks and placards, with the younger campaigners adding paper plates and love heart lollipops to the protest. 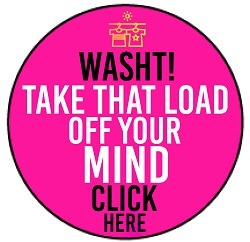 Said teacher Eimear Philbin, “As part of our Green Schools programme, we have been encouraging our pupils to choose sustainable ways to travel to school. Unfortunately, the speed limit outside our school is 50km/hour, making the road quite dangerous for our pupils who choose to walk, cycle or scoot. The Love 30 Campaign has been a wonderful way to raise awareness of speed limits among the local community and to promote safety for all road users.” 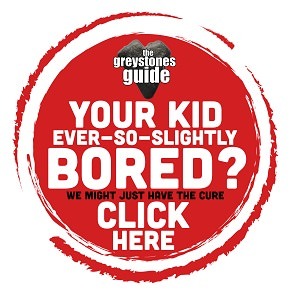 Despite that 50km/hour speed limit, and the fact that many motorists did slow down to 30 today as they witnessed the roadside campaign, students still registered speeds above that legal limit, with one driver hitting 59km/hour.

Despite the fact that he was driving through a protest comprising of 50 school kids. 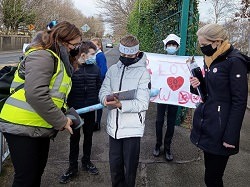 Says Lorraine Flanagan, the Green Schools travel officer who was there today, “Slowing traffic to 30 isn’t to punish drivers, it’s to keep communities and vulnerable road users safe and well. In Finland, communities feared lower speeds would cause delays and congestion, this isn’t the case. In Spain, communities have embraced lower limits, noise is reduced, people feel and are safer, and it helps create such a nicer atmosphere in that space between buildings that people hang out and that actually enhances business revenue! 30 is the new 50!” 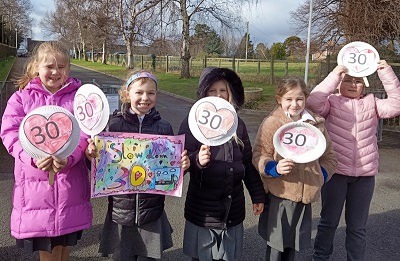 As for the students themselves, Riain Shannon found the high speeds of some cars “quite shocking”, whilst Sophia Parker and Amy O’Reilly were delighted that, said the latter, “our posters helped; they were slowing down“. Budding stand-up Jack meanwhile kept referring to those who did slow down for their protest as “Good grannies”. 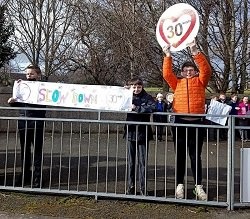 With local Green Party councillor Lourda Scott having secured €30,000 funding for traffic calming measures in Blacklion, and the then-Minister For Transport Shane Ross signing The Stockholm Agreement in February 2020 advocating for 30km as the default speed limit in areas such as schools and sports halls, it seems these kids’ wishes are coming true.

You can find out more about the Love 30 campaign right about here.

From Carraig Eden To Cape Town