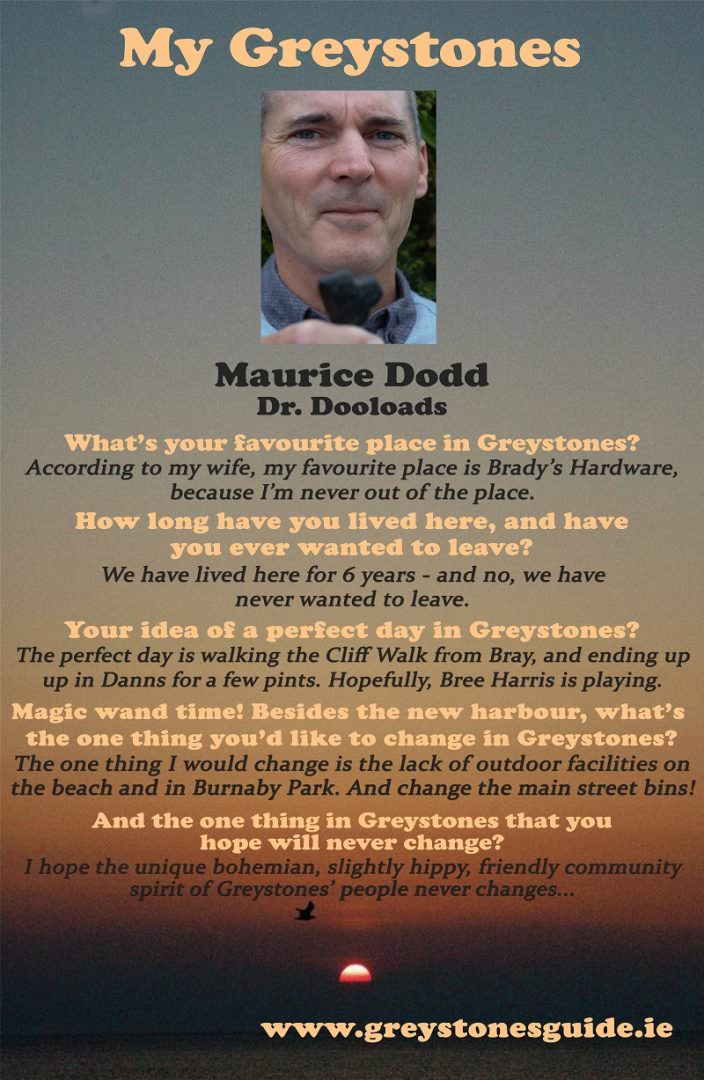 Beyond the fact that Maurice Dodd is plainly one of the good guys, here at GG HQ, we know very little about this week’s My Greystones star.

He’s one of those guys who always seems to be ready to help, a fact that you get to hear about firsthand from those Maurice has helped, but it’s also something you can gleen from his online presence. Impassioned and informed he may be, but Maurice is the sort of guy who knows that it’s better to say nothing rather than say something stupid. A trick many people on Facebook have yet to master.

Still, what to do about the fact that we know little or nothing about the man himself?

Hey, I know – we’ll email Maurice’s brother, Gerard, in London. He might have a word or two to say about his own flesh and blood, right? Turns out Gerard had more than a word or two. Lots more. And it all came with one very strict proviso – no editing. Whatsoever. 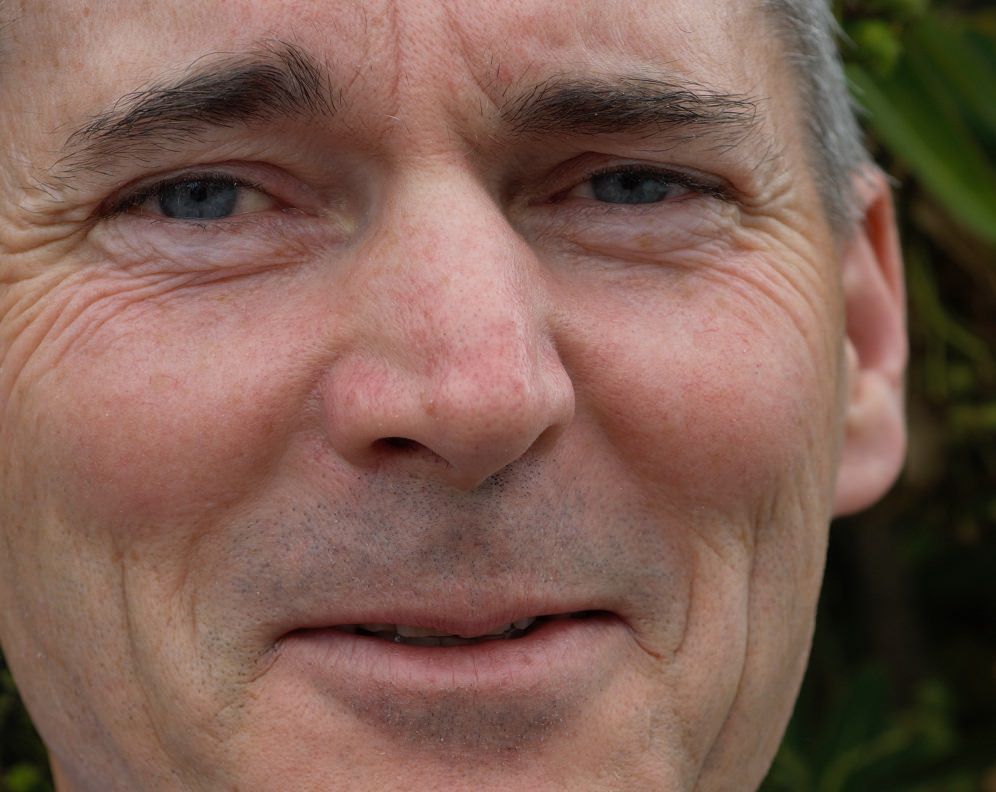 Today being the second day of August 2015, I find myself (Gerard Dodd) sitting in the sun in the rear of my house in Peckham, London, writing (by request of the owner of this blog) about my brother Maurice Dodd.
I have to admit that I was, and still very much so am, unaware of this blogs intent. The blogs owner has assured me that what I write won’t be edited in any way, he (the owner) requested some information by me for an article he is writing about my brother, so, here it goes, without any fabrication or glorification. I give you what I know about my brother Maurice.
I haven’t physically seen or spoken to my brother in several months, but I will begin with saying that I am sometimes envious of him. He is extremely happily married with three children and a beautiful wife. They live an honest and humble life in Charlesland, Greystones.

However, my story and thoughts of him begin years earlier, 40 years in fact. Seemingly, when my mother brought me home from the hospital after I was born, my brother never had me out of his arms, he seemingly dotted over me significantly more than any of my other siblings. To say my brother took over the role of my absent father would be a lie. He was always just my brother. I think he understood the value and importance of just being my older brother. Things weren’t always a bed of roses – I am not telling this story with rose tinted glasses on. I remember a time when I was only about 7 or 8 years old and my brother and his friend Keith thought it would be very amusing (to them) to attach a cable tie to my wrist. Of course, I freaked out and tried to undo the already tight cable tie by pulling on it, with the result of it only getting tighter. I remember pleading with them in terror to help me get it off my visibly swelling hand but having these two clowns decline my pleas due to them being in convulsions laughing at my over-reaction. Then having to run down to my home and have my other brother play the hero and remove the cable tie with a knife. 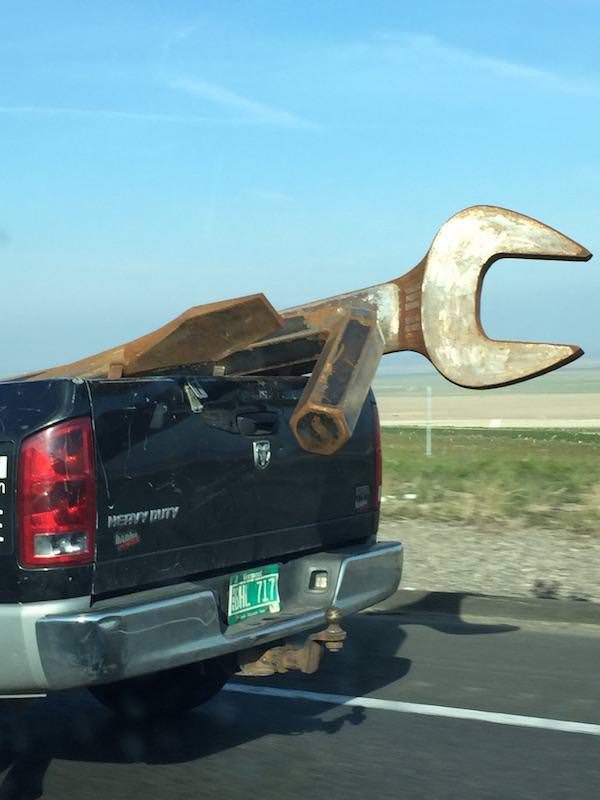 That was Maurice taking the piss. I laugh to myself every time I think of that day.
I remember my brother Maurice perpetually bringing home injured animals to our family home and attentively nurturing them back to full health. I have vivid memories of this time. Jackdaws, Crows, Hamsters, Dogs, Guinea pigs, Hens and Parrots were a common feature in our household. Today, I believe, he is fond friends with a hedgehog that visits his garden. I have an unwavering respect for animals and I believe it is due to me being surrounded by them as a child. I owe this very important trait to my brother. I remember my brother Maurice as a teenager and the values and interests he had then I now have acquired. That is a priceless gift he has given me because it breeds good character.

I can remember him always being new age in a way, even though I was unaware of that term at that time. He was always experimenting, growing plants, making things or fixing broken items rather than aquiring brand new. He always seemed aware of the importance of the preservation of nature or the importance of our past. Today I know Maurice grows an array of plants, vegetables, herb and fruit in his garden. His daughter Emma now has a very healthy understanding and knowledge of the importance of self preservation. My brother has enlightened me on such prehistoric sites as the Brennanstown passage tomb, which was constructed over 5,000 years ago.

He has taken me and others who are willing to follow on some epic walks up the Dublin/Wicklow mountains. Today, Maurice has strong views on the Irish Water charges and the Chem Trail theory. Maurice is not political and believes, like myself, that politics today remains securely in the grasp of the so-called elite and people like you and I are dealt with by consistently overlooking us. Politician’s decisions inherently become our consequence. I can truly say that my brother is for the people. Today, Maurice is nurturing a new business venture that is still very much in its infancy and in keeping with his passion for the environment his business is based on heat loss in the household. He called the new business Heat Tech. I wish him all the very best success with this new company and I hope good health for him and his family.

Myself and Maurice are brothers for some cosmic reason. He has enriched my life in many ways. I thank him for it.