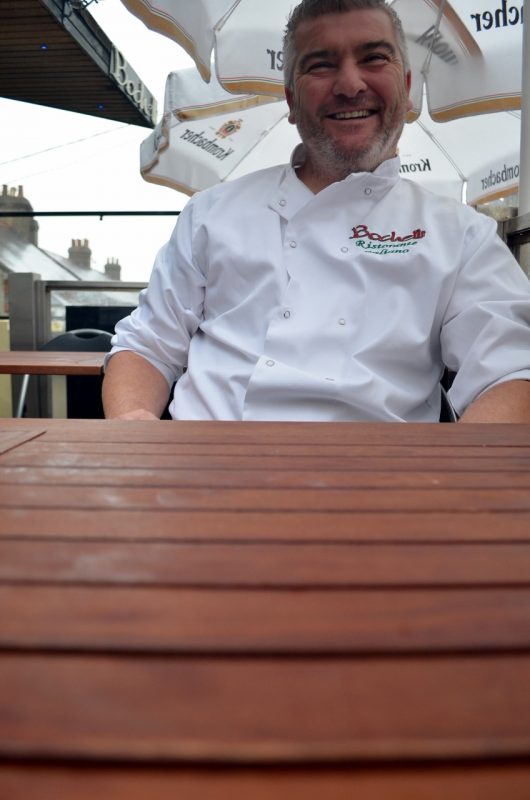 dinner for those unlikely to have one otherwise, he was reluctant to talk.

His point being, he was doing this not to get publicity, but because it was the right thing to do.

It was actually GG’s daughter, Lucy, who stumbled upon this fine gesture, as she searched the web for somewhere to volunteer on Christmas Day. Initially, it looked like the nearest charitable event on

the big day was in Dun Laoghaire.

And then she discovered the WH Five Loaves link. That led to the Bochelli’s link.

Everything seems to be hunky dory in the kitchen and waiting staff department – all that’s needed now are some volunteer drivers to help bring the diners to their table.

Details have yet to be finalised – Declan is talking with Five Loaves (who work with Wicklow’s homeless) later today – but it would involve a pick-up to get to Greystones for 12.30pm and being picked up again at 4pm. If you could do either, or both, sweet.

In the meantime, we did manage to get Declan on camera this morning. Here’s hoping this is the start of a beautiful tradition in Greystones…

You can find out more about WH Five Loaves – including contact details – here. The details for volunteer drivers is here.

Translation…
I also love Bochelli! Since we are in Greystones we are going to eat every day, the food is fantastic, the staff that works there is very friendly and the local is very welcoming. Declan is a very caring person and has a big heart, so I’m not surprised to spend Christmas Day with the needy.

Google translation… I can not imagine a better place to eat than Bochelli in Greystones. The food is great, but the best its owner, Declan, and all the people who work there. They are lovely and if I return here, a must stop !! Great!!!

He is such a decent hard working guy, this is just one of many stories of his charitable and caring nature that I know of.

Well done to Declan and staff for sharing Christmas !!
It is always a treat to go to Bochelli’s Restaurant.
So I know the Christmas diners will have a wonderful meal !!

Flashers Spotted Down At Greystones Harbour!