Don’t Tell Me Not To Fly

or many around the country and beyond, it’s the greatest TV show of the year, every year…

And when it came to the latest Late Late Toy Show this year, for just about everyone on the planet, there were two perfect moments. 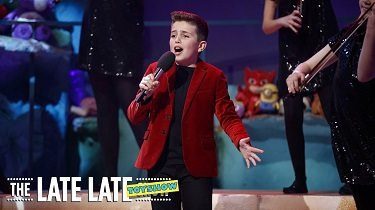 There was those beautiful kids, Adam and Kayla Burke, getting a very life-like, life-sized. walking, talking, living soldier doll, and there was a certain 10-year-old vocal powerhouse who brought the house down and the audience up out of their seats with his rousing, rakish and rockin’ take on the Barbara Streisand classic Don’t Rain On My Parade.

At the time, GG was so overwhelmed by the

performance of Maiú Levi Lawlor that we didn’t actually grasp this young singing sensation was from sunny Greystones.

We were too caught up in that vibrant performance, the St Paul’s Primary School’s kicking string section, and Maiú having to be comforted by Ryan Turbidy as the audience’s standing ovation proved a little too much for someone who had dared to dream of just such a moment ever since he first grabbed a hairbrush and belted out Somewhere Over The Rainbow on the kitchen table. 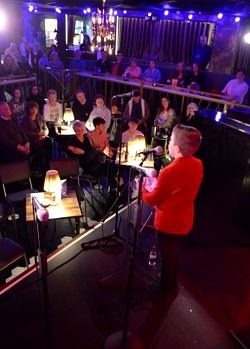 Yep, Maiú Levi Lawlor is something special, having told his parents at the tender age of four – straight after witnessing his first big stage musical in London – that, when he grew up, he was going to be a Theatre Man. And he was going to live in The West End.

The show was The Really Useful Group’s production of The Wizard Of Oz, the venue, London’s Palladium Theatre, and last April, that young kid took a major step forward in his world domination plans when he took to the stage at The Olympia for The National Performing Arts School‘s production of A Wizard Calls.

And now that dream has taken not just a major step but a major leap forward, thanks to the acclaim and love that followed his Late Late Toy Show appearance – check it out here.

About to make his solo debut at The Whale, we caught up with mighty Maiú and one of his proud parents, Dawn, this afternoon, to talk inspirations, perspiration and rockin’ the nation…

You can check out Maiú’s solo debut – supporting The Ultimate Adele Experience on Saturday, March 31st 2018- right about here.

What a voice, my vote has to go to Maiú Levi Lawlor. Well done young man.

Gets my vote. Well done Maiu

Greystones vs The Beast: Day Five