McFarland's grocery store in the town over 100 years or Greystonians of a certain age, Edith McFarland was a big part of their childhood. With the family business situated where Allied Irish Banks have parked themselves now, Edith spent much of her life behind the counter of the McFarland grocery store, alongside her husband, Claud. 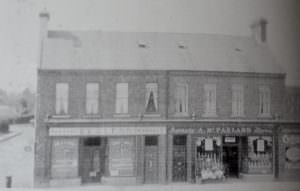 It was back in the 1897 when Claud’s  father, Andrew, had built two shops side-by-side, along with a row of small red-brick houses, on Greystones main street. The grand total of £800 was spent developing the site, with builder Patrick Joseph Kinlan putting together the two shops and the accommodation overhead.

The shop pictured above – which shows proud parents Claud and Edith with their three daughters, Elizabeth, Patricia and Jean – and its neighbour were originally called Burnaby Stores, and were both a major attraction for the kids in the area every December, when one of the windows would be decorated with nuts, boxes of currants and raisins, and green and yellow candied peel, whilst the other would be stacked high with Wexford hams.

Claud – who passed away on February 16th, 2006, aged 89 – took over the business when his father died in 1937, being the only son, and it remained a family business until 1970, when he retired. The neighbour Royal Bank bought the premises and moved in, becoming AIB a year later. Subsequently, John Hatton – who married Jean McFarland – was manager there for a time. Claud at the La Touche bath

We offer our condolences to all of the extended McFarland family, and only wish we’d been lucky enough to meet this wonderful woman. The McFarland cart with Olive, plus Jimmy & May Munday You can explore more of Greystones much-loved and long-gone shops here.

Algernon ( Algie) Hendy who owned Henry’s Chemist opposite Ally Evans married Olive Mc Farland. They had one son Vernon currently living in the UK. The moved the pharmacy to The Rise , Mount Merrion and ran it until Algie died.
Source Elizabeth Mc Farland Homan

Sorry to hear of Mrs. McFarland’s passing. She was a beautiful and wonderful lady.
I worked at McFarland’s 1957 – 1958 , serving in the shop and taking grocery orders up the Burnaby and Rathdown area by bike twice a week for delivery the next day by van. The van driver was named Toole from Killincarrig I believe. Claud was a great person to work for . The shop was great too , everybody shopped there. There were regulars who came in just before closing on Saturdays to get the ends of mis-cut hams and rashers, scraps. They would get great stuff for a shilling !
I don’t remember names of all who worked there now.
I emigrated in 1960 to Canada and now live (retired ) in Hilton Head Island , South Carolina. ( warmer ). I visit Ireland including Greystones every year. We love the Hungry Monk but have not tried the Happy Pear. Maybe when we are there in June.
Again , sorry to hear about Mrs. Mc.

PS Found your website in December. I now look everyday. Liked your piece on Joe Sweeney and his chipper. My Mother owned and operated a shop in the Anchor in the 50’s. She passed last year in her 102nd year.

Hi John,
Great to hear from you. And I have a feeling you’ll be popping up in our archives soon enough – I’ve seen quite a few beautiful old black & white Somers family shots on my travels, and we’re keen to build up as strong a Greystones archive as we can here.
Let us know when you’re next homeward bound (info@greystonesguide.ie), and we’ll catch up with you in person. Be good to do a little gold mining with someone who was there…
Cheers
Paul

Thank you John for saying such nice comments about the shop. It certainly was a busy place. To this day I can tell you the names of all the customers who lived on the Burnaby. We miss Mum she was the business head behind my father.
Like you I emigrated and now live in Sydney but try to get back to Ireland every year.
Elizabeth Homan née Mc Farlan

Tracks Of My Years: Leo O’Kelly