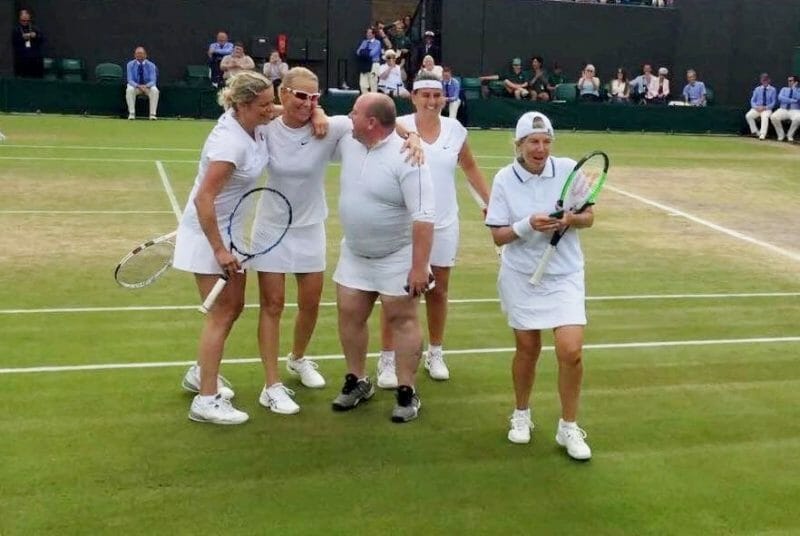 Well, there’s a sight you don’t see every day… Chris Quinn, captain of the Greystones Lawn Tennis Club, got picked out of the crowd at yesterday’s Legend Ladies game at Wimbledon – and got to play.

Once, of course, he was able to put on one of those little white skirts. 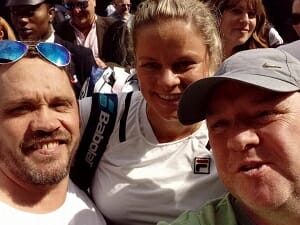 And Chris is a big man.

It all came about after Belgian former tennis pro Kim Clijsters put the call out to the Wimbledon crowd for advice.

And that’s when Chris shouted out, “BODY!”, although he might have been thinking about something other than tennis.

And Kim’s reply? “You said body? Why don’t you go there?!”, inviting Chris onto the court to great applause from the crowd.

And that’s when Wimbledon’s strict dress code went for a Burton, as Chris valiantly squeezed into a skirt. Luckily, the video below doesn’t include any shots from behind.

Later, Chris even managed to get a selfie with the Laura O’Halloran lookalike. Being the tennis groupie that he is.

It couldn’t have happened to a nicer cross-dresser.

Hey, you could be stepping out in Chris’ world-famous skirt as it goes up for auction for The Gavin Glynn Foundation. Nice!