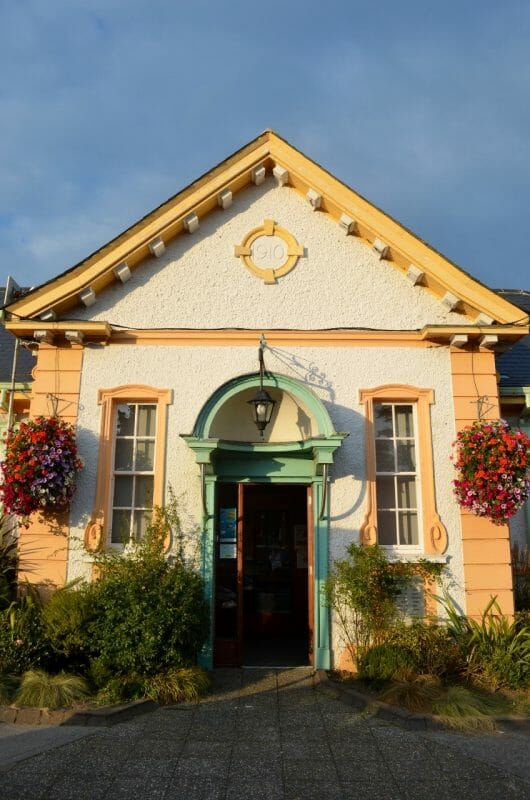 t may be one of the most loved, and most frequented, facilities in the town today, but Greystones library’s arrival over 100 years ago was something of a baptism of ire. 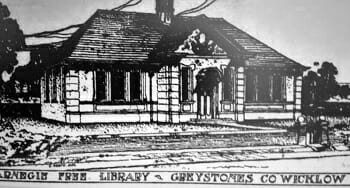 As one foolhardy councillor put it at the time, having a library in Greystones was “the greatest rot ever heard of”, going on to call for ratepayers’ money not to be wasted on this “perfectly useless project”. 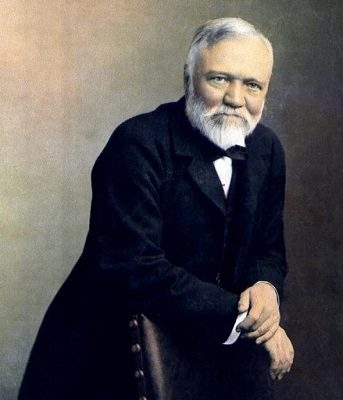 The year was 1908, and that councillor, barrister Thomas Hewson, was plainly something of a short-sighted eejit. Not that the man stood alone, others soon joining the fight to ensure that this ‘white elephant’ would never be built in Greystones.

Just how they fought the library’s arrival has been charted by local historian Rosemary Raughter, one of the leading lights of the Greystones Archaelogical & Historical Society. Just published on Our Wicklow Heritage, the full article goes an awful lot like this… 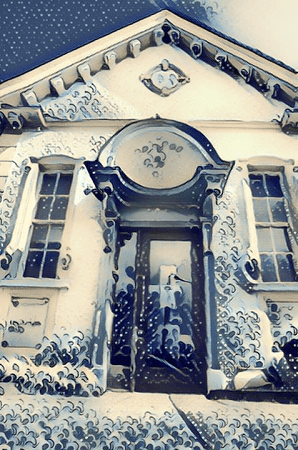 In February 1908, The Wicklow Newsletter carried an architect’s sketch of the proposed new library for Greystones. The project had first been mooted some time previously by the developer Patrick Kinlen during his term as a member of Rathdown Rural District Council. A site had been obtained from local landowner Mrs Le Blond at a nominal rent, and sanction for the project had been secured from the American philanthropist Andrew Carnegie [of Carnegie Hall fame; above], as part of his grant scheme for the provision of public libraries throughout the UK and Ireland. The Council now put out a call for tenders, and W J Harris of Greystones was in due course awarded the contract for the building.

The plans for the new library were modest, but, as the report put it, ‘quite sufficient for the requirements of the locality’. It was to comprise ‘entrance hall, book stores, reading room … ladies’ 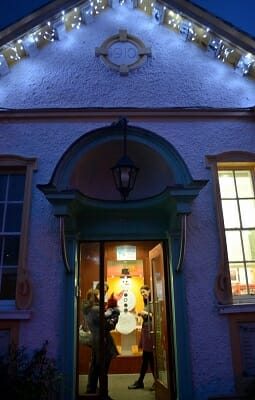 room … reference room and book store … also space for librarian, with delivery counter for books. The librarian or attendant is centrally placed, so that he can exercise general and effective supervision … The architectural style of the building will be a very simple type of Georgian Renaissance, such as was common in Ireland in the 18th century, and is suited to the plain materials available.’

Within a very short time, however, it became clear that not all residents welcomed the plan. The first public murmurs of dissent came from one of the councillors, barrister Thomas Hewson, who damned the proposed library as ‘the greatest rot ever heard of’, and declared his objections to spending ratepayers’ money on such a ‘perfectly useless project’. ‘All we can say’, observed the Wicklow Newsletter loftily of this outburst, ‘is if these expressions are a just reflex of Mr Hewson’s opinions on the subject, he is a subject for pity rather than for anger.’

Hewson, however, was far from being alone in his prejudice. Over the following months the debate generated considerable heat, with opponents arguing that a free library would be a ‘white elephant’, since there were already two ‘splendid’ lending libraries in the village (to which users, of course, paid a subscription). Advocates of the free library, such as Dr Archer, meanwhile, contended that ‘we should do everything to educate the people’, and that the chance of having a free library 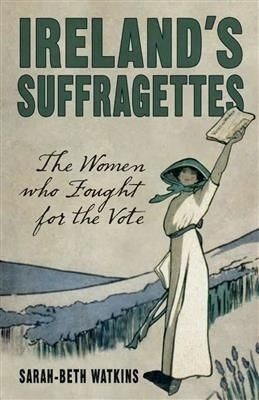 by availing of Carnegie’s scheme should not be let slip.

Opponents of the proposed library soon organised themselves, and in December 1908 the Council received a ‘memorial from a large number of local ratepayers’, expressing the view ‘that the proposed free public library in Greystones ought to be abandoned, inasmuch as a library is not required for the village, and because the expense of maintaining same would far exceed the amount which it is in the power of the Council to “levy” as rates for the purpose.’ 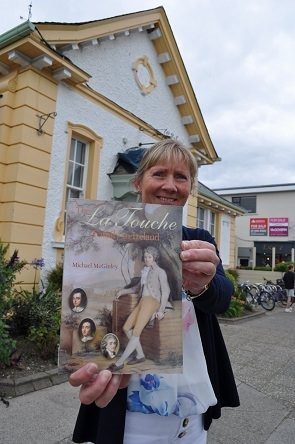 The seventy signatories included both Greystones natives (‘a baker’s dozen of Doyles, and eighteen Evanses’, as one report noted) and more recent arrivals and residents of the Burnaby estate. Two names on the list caused particular surprise: Ormsby Vandeleur had been a member of the Council when the provision of the library was first suggested, and had voiced no objection at that stage, while Frederick Batchelor, as architect to the Burnaby estate, had, as required, already approved the design for the building. Young Arthur Burnaby, Mrs Le Blond’s son, also weighed into the debate, informing the Council, through his solicitors, that he ‘does not see the necessity for a free library, and … the residents of the Burnaby estate do not require it.’ 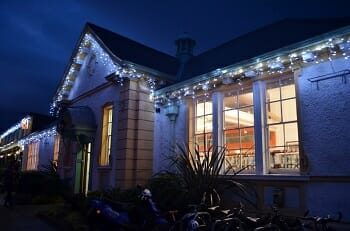 Despite such objections, building proceeded, and it was reported in early 1910 that the library ‘is now rapidly assuming practical shape’. In reality, progress was slow: a meeting of the Council in November 1911 heard that the site was currently ‘derelict’, that the Library Committee hardly ever met, and that, while there were fifty chairs in the building, there were no books. Furthermore, the Clerk reported that when he sent out about a hundred letters requesting assistance in providing books, ‘he received but six replies, and only one of them was complimentary. The others wrote saying that they did not consider a library at all necessary for Greystones.’

Greystones Library finally opened its doors on 17 June 1912. The inaugural ceremony was performed by Lord Justice Cherry, who remarked in his speech on the embarrassment residents must have felt at the slow pace of the project. The building, as he reminded them, ‘had been erected some two years ago’ – as the plaque reading ‘1910’ over the front door indicated – but ‘had ever since been dormant … They were now going to change all that, and … would see that the library was worked in the best possible manner.’ Mr Carnegie, in his ‘munificence’ had supplied the building and ‘other appointments’, while Rathdown Rural Council ‘provided a sum of between £40 and £50 per annum.’ However, books were still badly needed, and must be supplied by local people themselves. 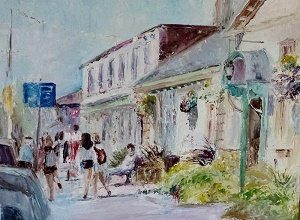 Finally, and crucially, a librarian had been appointed: Miss Ellen Kirby was at this time about thirty-five years old. Born in Waterford, she was living in Greystones with her widowed mother and her unmarried sister. She may have had literary ambitions of her own: her partially illegible census entry seems to describe her as ‘author’. Certainly, she is described as ‘taking up the duty as a labour of love.’ Within a year, fortunately for her, her salary had been raised to 7s 6d per week, and she seems to have continued to serve as librarian until her untimely death in 1922. 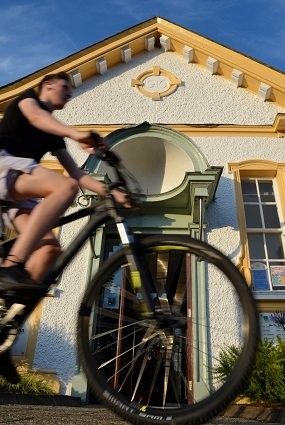 The vehemence of the initial opposition to the library is slightly mystifying. Undoubtedly, this was based, at least in part, on the cost of the scheme, with ratepayers objecting to any possible increase in taxation – an increase, moreover, which might have been regarded as benefiting only that sector of the community likely to make use of a free, as opposed to a subscribing, library. There seems also to have been a fear that the space would be used for inappropriate or contentious purposes: according to one councillor, the only objection prior to the receipt of the 1908 memorial, ‘was to the proposal to hold meetings in it’, and ‘to meet that objection, the council consented to a clause being put in the lease preventing that.’ Whether there was also a degree of sectarian rivalry or animosity at play can only be a matter for speculation.

Certainly most, if not all, of the named objectors were Protestant (although it is important to note that they formed only a minority of the total Protestant population), and some of the leading advocates of the scheme, including its originator Patrick Kinlen, Father Flood, the parish priest, and Miss Kirby herself were Catholic. On the other hand, both the Church of Ireland rector, Rev Daunt, and Father Flood attended the opening ceremony, intentionally or not signalling cross-community support, and members of both communities contributed to its collection over the next few years. 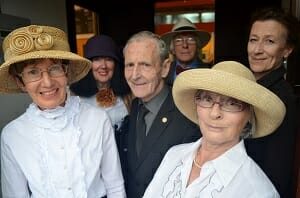 Whatever the factors behind the hostility which greeted the announcement of a new library for Greystones, within a year of its opening opposition appears to have subsided. ‘General satisfaction’ was expressed at the progress made, Miss Kirby was proving herself an energetic and effective custodian, and the lack of reading matter had been addressed, with donations from many local residents and wellwishers, among them artist Jack B Yeats, historian Alice Stopford Green and nationalist MP Willie Redmond.

As so many initially noisy controversies do, this one seems to have blown itself out relatively quickly, allowing Greystones Library to become established as the valued local amenity which it still is.

Rather than as the ‘white elephant’ of its early opponents’ overheated imagination.

You can check out Rosemary’s sources here, find out more about Greystones library here, about Carnegie Libraries in Ireland here, the Greystones Archaelogical & Historical Society here, check out their History Of Greystones talk at the library here, and see our Sept 2016 interview with Ms Raughter here. After all that, go read a book.

Andrew Carnegie was Scottish by birth, from Dunfermline in Fife, also my home county. His family moved to the US when he was 12. Dunfermline town has several buildings and a park gifted to them by Carnegie – including the other, some say original, Carnegie Hall.

It’s like you’ve been reading our mind. And our archives. https://www.greystonesguide.ie/carnegie-library-gets-stamp-of-approval/