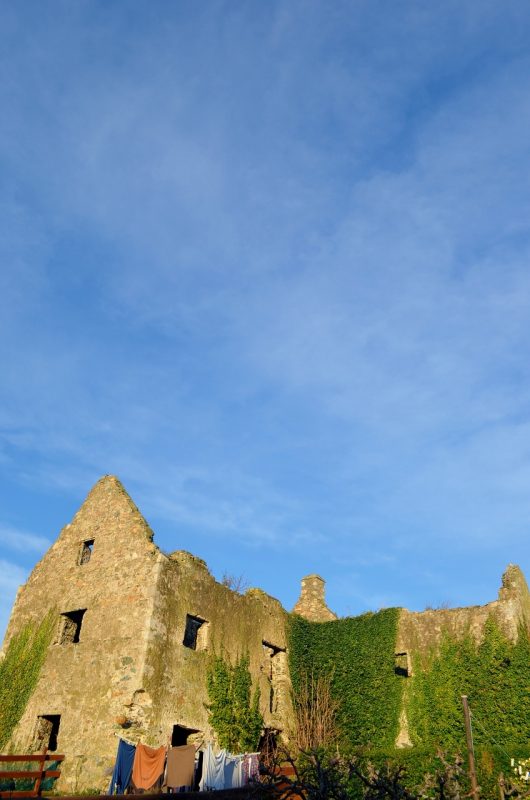 open – if hedge-covered – entrance on the remaining side, we found out the hard way when we visited Killincarrig Castle that it’s actually privately owned. 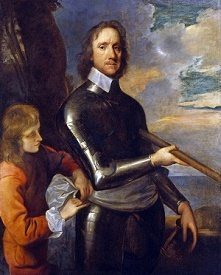 Having tried to access the weed-covered site through open ground bordering Burnaby Heights – but the brambles proved too thick – we then headed around along Castle Villas, and knocked on the door of the house closest to Killincarrig Castle.

With no one home, we proceeded to take a look at this still-impressive building. Even if it is now being used as a dumping ground for old swings and hedge cuttings. 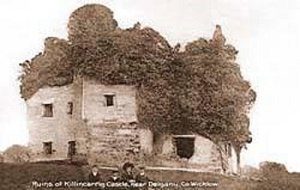 It’s one of those buildings that GG has been meaning to explore for quite some time, and it was when we recently noticed that local historian Karl O’Neill seemed to be meticulously chronicling many such local ruins on social media that we thought it would be pretty darn smart to bring someone smarter along on our latest expedition.

It was only after our visit that long-time villager and local troublemaker Charlie O’Neill also brought to our attention a history of the castle put together as part of the WCC’s Social Employment Scheme. We’ve included that here also, along with a February 2016 video shot by local history fan Michael Martin. 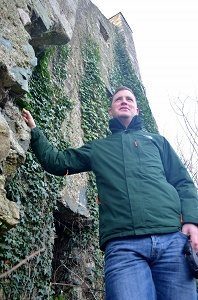 In the meantime, apologies to the owner of the land. As for the Czech neighbour – and his two loud-mouthed mutts – who demanded we leave, IMMEDIATELY! – relax, man. We’re all just passing through.

Now, over to Karl for that Killincarrig Castle history…

On an east-facing slope in Killincarrig village stands a partly-fortified house known as Killincarrig Castle. Constructed in the early 16th Century, records show that it was owned by one Henry Walsh.

The Anglo-Irish Walsh family were very powerful in South Dublin and North Wicklow, their seat of power being the large and now obliterated castle at Carrickmines. Although Killincarrig Castle today provides shelter only to crows and brambles, it would once have been a comfortable and spacious dwelling. 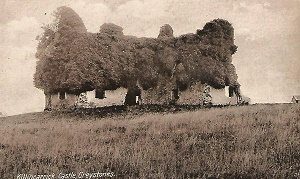 Joist holes in the bare masonry show that the house had two floors and an attic. Large windows look out over the surrounding modern houses that now have the castle firmly surrounded, having sprung up right beside the castle over the past century.
Crafted in more violent, turbulent times, this building has now yielded her gardens and lands to thin-skinned, wooden framed dwellings with every convenience of modern living. 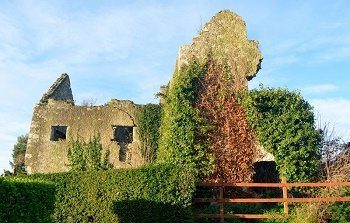 There are several chimneys visible in the north and west walls, some of them over a metre thick. The Archeological Inventory of Wicklow mentions that a shallow armorial inset is to found here too. The exterior walls are curtained thickly with ivy but it is still possible to see how this building would have been an impressive manor.
The Down Survey of 1657 states that Killincarrig Castle was the ‘finest building in the half barony’.

There are accounts of how the bould Oliver Cromwell stayed here in the mid-16th century, and that his horse was stolen by locals. In anger he is said to have set out to the nearby Kindlestown Castle and finding that the garrison had fled to Arklow, sacked it before following them down to that Wicklow town and laying waste there too. Musket balls have been found at this site.

Access to this site is difficult due to the overgrown nature of it and that it is largely surrounded by private property but a walk down Castle Villas offers some good views of the southern walls and gables. 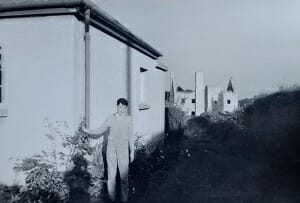 The teenage Charlie in front of the castle

And here’s that WCC-funded Killincarrig Castle history, sadly copied from a very faded copy – so, the odd word had to be guessed. Also, much of the grammar here seems nuts, both from the original documents and the modern summaries..

The castle was probably built by Henry Walsh in the early parts of the 17th century. Documents preserved in the Meath estate office record the purchase by Henry Walsh of different portions of Ballynerrin between 1602 and 1625. The families also held substantial property in Carrickmines. The Fiants of Elizabeth 1 mention Theobald Walsh of KILLENCARGE, gentleman, in 1582.

The castle figures a number of times during the Confederate Wars. It was garrisoned by the Catholic Confederates under Colonel Hugh Byrne. In 1649, Cromwell, having arrived in Dublin en route to Wexford, captured Killincarrig Castle. He left a company of soldiers to hold it and proceed southwards. His garrison seems to have been besieged and hard pressed, for about 3 months later a substantial force of about 1,300 arrived from Liverpool and Chester. 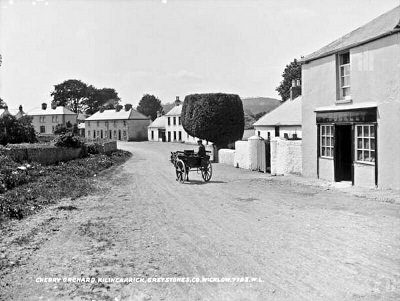 The most important reference to Killincarrig at this time is from Cromwell himself in a letter he wrote from Wexford to the Speaker of the English parliament:

Sir,
On Thursday, 27th of September, wee march’t out of Dubin some part of the army, for expedition sake being weren’t before. In our passage hither (Wexford), several castles held by the enemy fell lo unto us. the first was KILLINCARRIG, having been quitted by the army having heard of our intentions to march that way…

John O’Donovan reported in 1538, ‘they say Oliver Cromwell slept several nights in it’.

The Civil Survey of 1665-67 says, ‘The most remarkable building in this half-barony is the House of Killincarrig, being garrisoned during the time of the late warren’.

After the Settlement, the Walsh family forfeited their property. In 1667, a grant under the Acts of Settlement and Explanation was created to find Earl of Meath concerning Killincarrig and other properties in the area. It seems like that the house was allowed to fall into disrepair after the Restoration. Local tradition has it that a ’98 insurgent hid there for months after the Rising.

In 1944, when the present cottages were being built by the Council, attempts were made to have the castle demolished. Opposition to the proposed destruction was spearheaded by Dr. Sean McEnetee, Asgr Durran, as well as other local people. A leading expert on castles, the author and historian H. G. Leask, was commissioned to examine the ruins and his report is as follows:

The main structure is complete and stands to its full original height, but the north wall of what I think was the kitchen wing must have fallen or been removed long ago, together with part of the east gable. The recently suspended demolition began at the F.E. corner but had not proceeded very far. Thought some quoin stones were taken out in the past, the struct us quite stable.
There are not many cracks, despite the fact that all the wooden lintels of openings and lintels of arches of fireplaces were removed long ago. The entrance door is [no longer present] because of the removal of its wrought Jamb stones, but its original dimensions are discernible. The building is undoubtedly an early XVIIth century house.
It probably had outbuildings and a courtyard sufficiently strongly-walled to justify the designation of ‘castle’. The building itself has but two musketry loops. All traces of outwork have vanished.
The main block, about 47 feet wide and 25 feet wide, is gabled at both ends, of two storeys in height, plus an attic storey in the roof.
Projecting to the east is a small stairs turret, with loops flanking the adjacent walls. In the same wall there is a massive chimney stack rising from an external projection and quite complete. The ground floor seems to have been occupied by a large hall (41′ 7″ x 19′ 10″), with two rooms on the floor over. what I judge to have been the kitchen wing, to the N.E., is of similar construction and the same height.
All the window openings are nearly perfect and originally had one, two or three-light window frames of timber about five inches square. They were probably latticed casements. The openings had timber lintels, evidently formed of small half-round tree trunks which have left their impress in the mortar.

Now, go check out Ethel & Charlie’s oral history of modern Killincarrig here. Once you’ve checked out the video and photos below, of course. 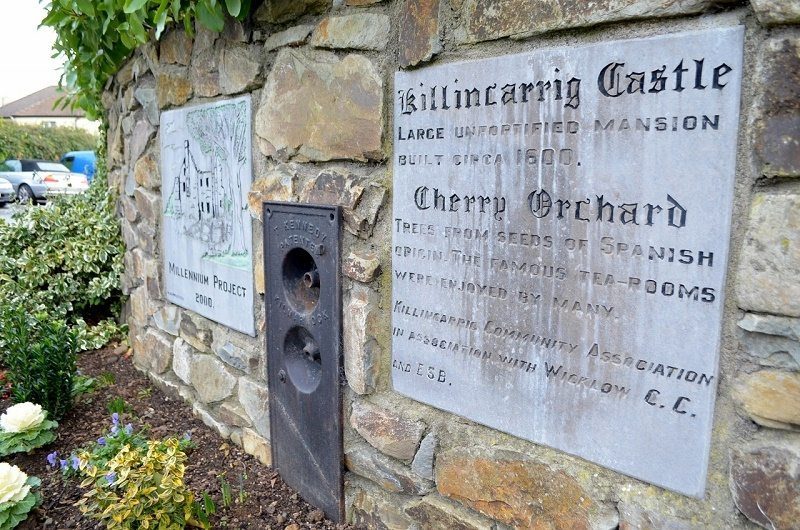 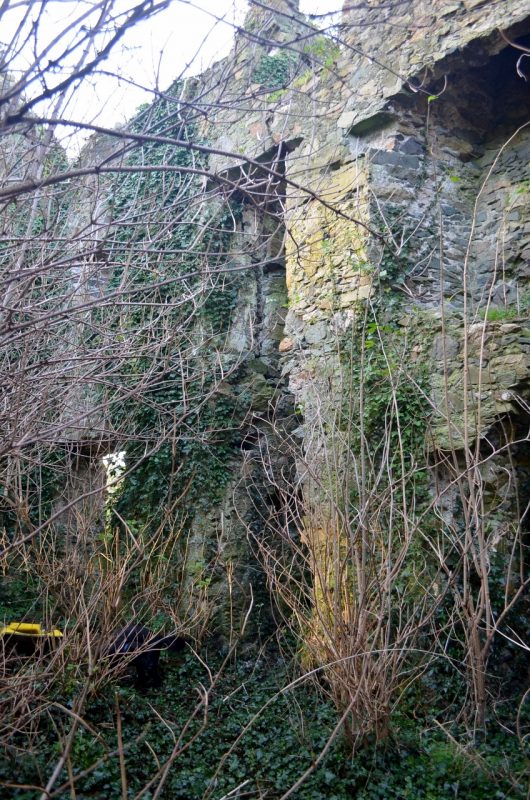 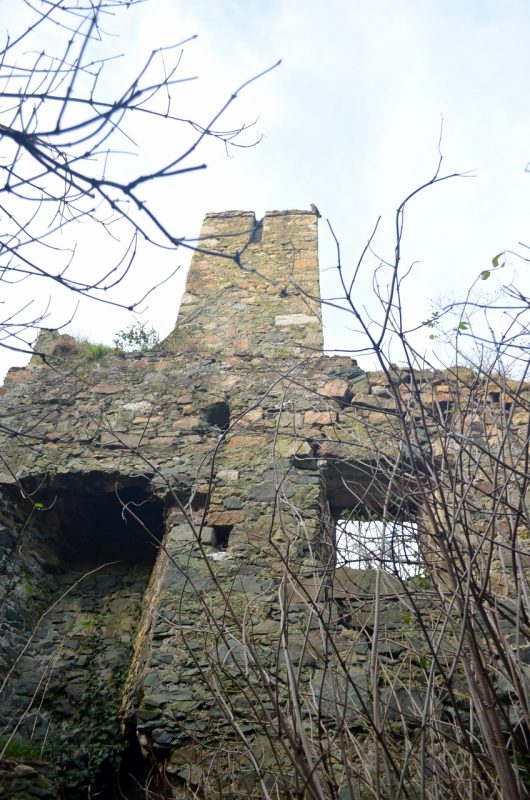 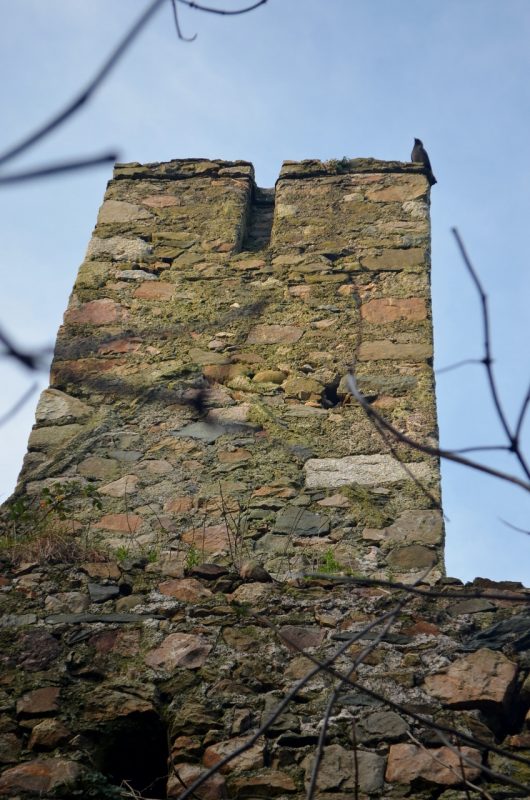 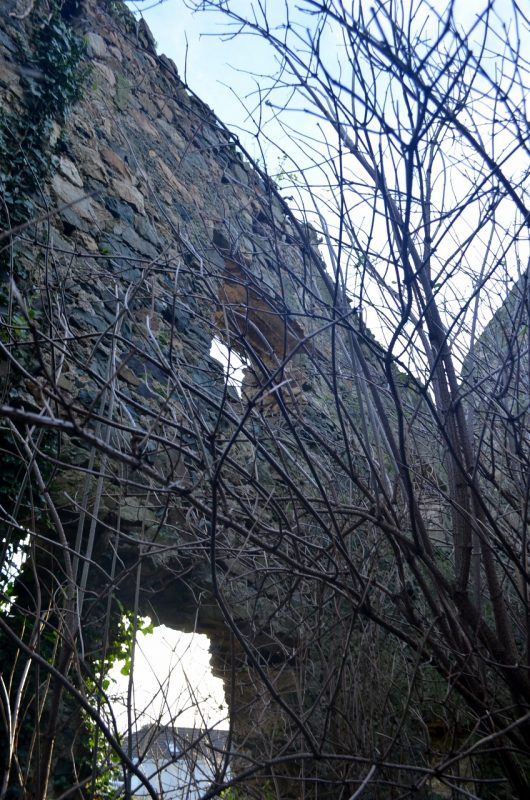 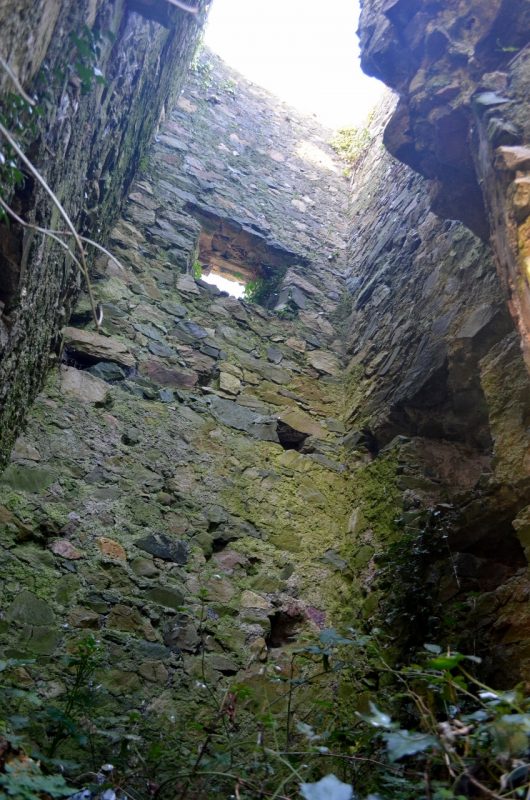 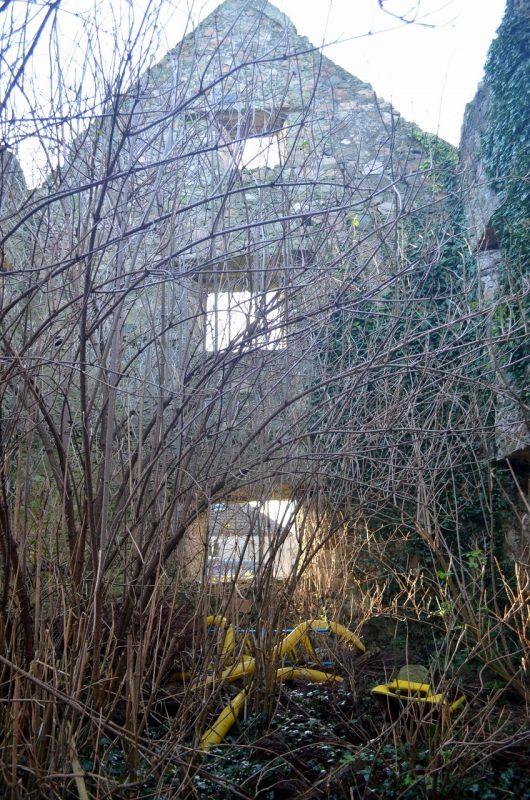 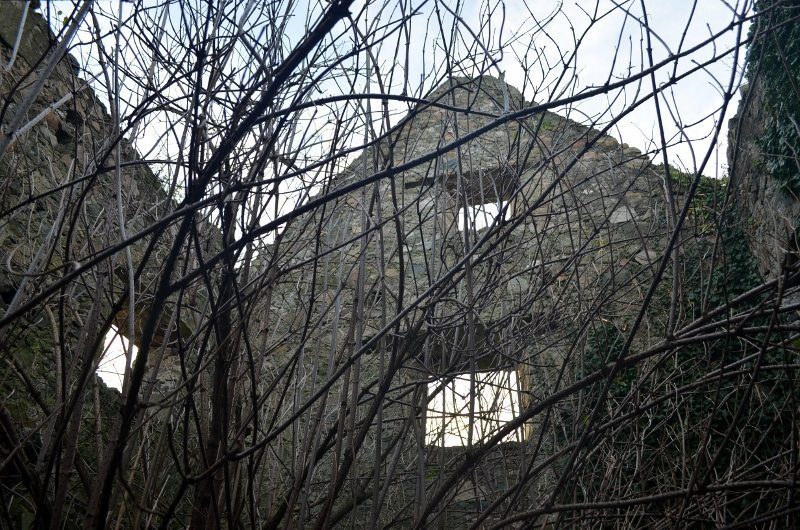 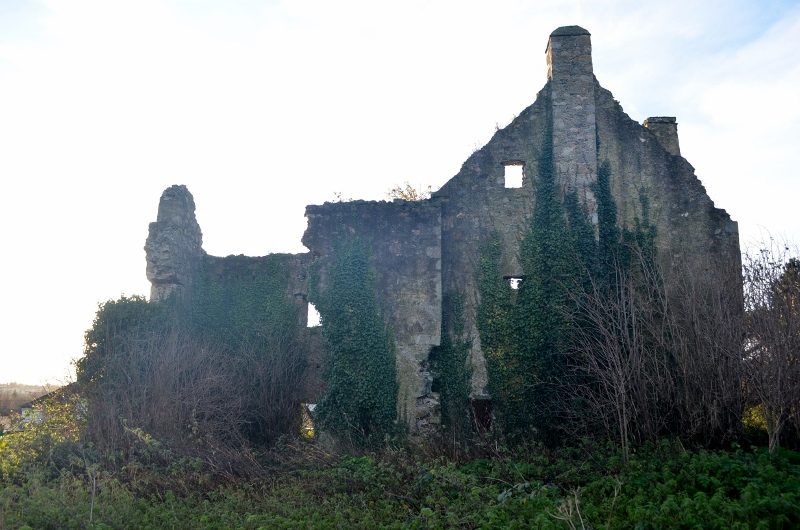 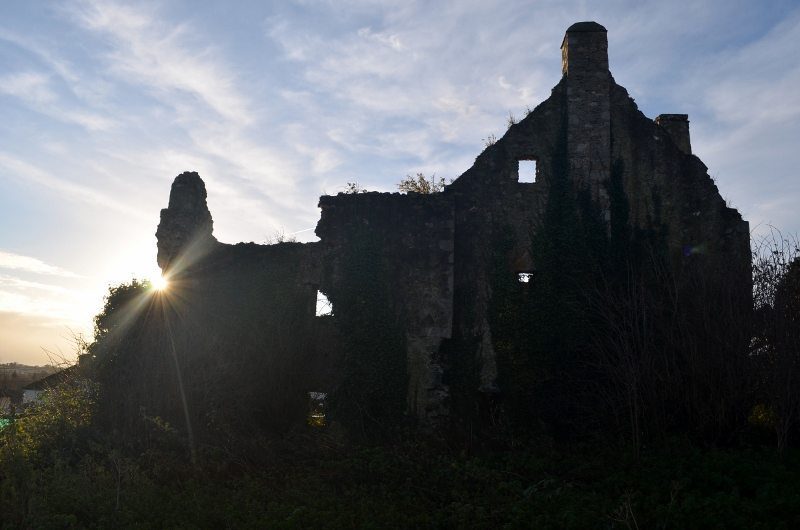 Now, go check out Kindlestown Castle here. Or we’ll set the red-faced Czech lad on ya.

This is very interesting. We need to preserve our heritage.