Thanks to technology’s rapid progress on the interweb, our past has never

If you want to revisit your favourite Top Of The Pops moment, relive the Pope having a party in Phoenix Park, or see just how the front of The Shopping Basket used to look, the internet is there to take your hand back in time.

And, one fine day, the Guide’s own GGTV archives will provide a joyous trip or two

down memory lane for those lucky schmucks who live in de future.

It helps, of course, when those big institutions with dirty big archives to play with open their doors to the general public.

From The National Gallery of Ireland to Pathé News, it’s wonderful to see just how many parts of

history’s jigsaw are available to us now.

Here, we turn our electric eye once more of our national broadcaster, RTE, and the many times over the decades they’ve swung by our neck of the ever-decreasing woods.

Mainly because we’re just a 20-minute drive from RTE 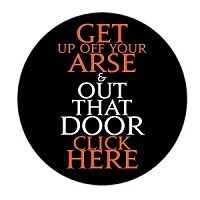 HQ in Donnybrook. The lazy gits.

From Greystones National School embracing the uniform to 75-year-old Pat Kehoe doing his Leaving Cert, from the eco-warriors setting up camp in Glen Of The Downs to Garth Brooks doing an unplugged concert from the top of his van, there’s gold in dem der news clips.

The eco-warriors set up camp in the Glen Of The Downs to stop the new road expansion. Broadcast 22nd Sept 1997

Christmas with the Glen Of The Downs eco-warriors. Broadcast 24th Dec 1997

Eco warriors lose their battle to save those trees. Broadcast 19th March 1999

Other goodies in the RTE archives include Greystones opera fans joining the Wexford Opera House Train in 1973, mountain climbing in Glendalough in 1965, preparing for Halloween in Bray in 1977, a 1950 victory dance in Newtownmountkennedy for their Under 16s Dublin Wicklowman’s Cup win, a 1982 report on Wicklow people’s writing their wills, Powerscourt House destroyed by that 1974 fire, and, from 1986, making shillelaghs in Shillelagh.

You can also check out our local Pathé News stories here.

There Will Be Oil

Young Drums Go For It!