The Escape Artist speaks! To us! 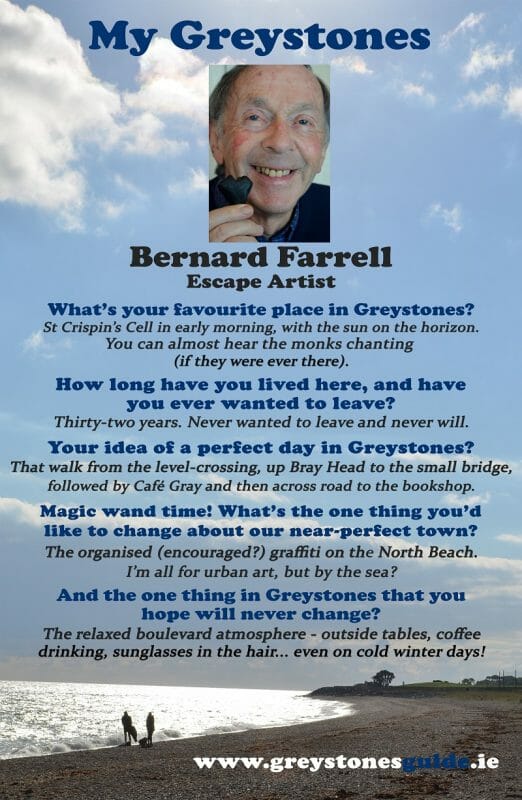 or the first time in the four years that we’ve been running our weekly My Greystones column, we 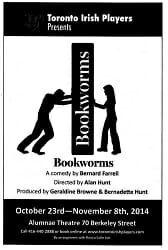 haven’t managed to post a fresh one in four weeks.

Partly due to all sorts of busy kicking off at GG HQ, partly out of laziness, but mainly because, dang 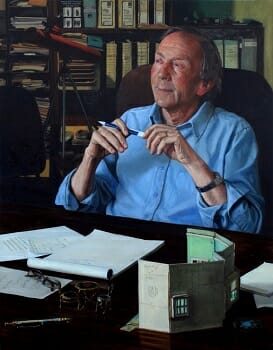 it, we were intimidated by our latest Greystonian contributor.

You see, as much as GG likes to think that we’re witty, warm and wise, Bernard Farrell is the real deal.

And so it was that, every time we even thought about writing about this man, we buckled. And blathered. And basically put the task off until tomorrow. Yet again. 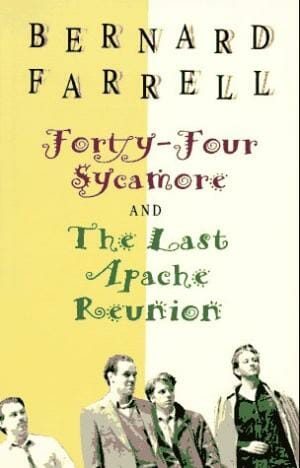 Well, tonight, we finally worked up the courage, and present here, to you, our polar opposite. A man big on talent but very small on shouting about it.

Did we mention that Bernard’s portrait – right, painted by Blaise Smith – is hanging in the Yeats lounge of the Abbey? We can’t even keep one of our crappy posters up in the Dart station for more than 24 hours.

This is the man who has written 22 plays, half of them premiering at the Abbey, and pretty much all of them rip-roarin’, side-splitting, chin-stroking successes. Oh, and award-winning too.

Over the past four decades, Farrell has won the Rooney Prize for Irish literature, a Zebbie award and a John B Keane Lifetime Achievement award. 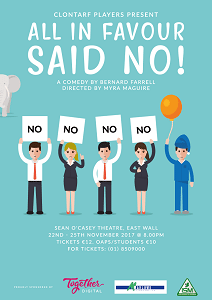 From his 1979 theatre debut, I Do Not Like Thee, Dr Fell to 2010’s Bookworms, if Farrell’s hugely popular comedies have a common thread, it’s pricking the pomposity of the middle classes. Is it any wonder then that the man moved to Greystones from Sandycove 32 years ago? Although we reckon his young bride, Gloria, may have had some influence on the move too.

It was pretty much inevitable that Bernard Farrell would become a writer. At the age of 17, he had his first work published, a short story, in the Evening Press. The long-gestating overnight success of I Do Not Like Thee, Dr Fell proved to be a springboard to a long and illustrious career, on the stage as well as TV and radio. Through it all, Farrell has used the cloak of comedy to tackle the darker aspects of the human psyche.

“Comedy will always be seen as the poor cousin of tragedy,” the playwright said recently, recognising that critics, in particular, often fail to understand the fine art of being seriously funny. After all, comedy is tragedy plus time, to quote the popular Jewish wit Allen Stewart Konigsberg.

Having recently celebrated 32 years of marriage to the beautiful Gloria, Farrell is currently working on a new play, still in love with a certain childhood thrill after all these years. Thanks to an O’Casey-loving father and a Shakespeare-adoring mother, the young Bernard and his two sisters were taken regularly to The Gate, The Olympia, The Queen’s and The Royal, and that magical moment when a curtain rose in a darkened theatre to offer a great escape struck a deep chord.

And it’s that very same magical moment that the adult Bernard Farrell sets out to offer each new audience with each new play. So far, it’s been working. Spectacularly.

So, you know, is it any feckin’ wonder we were a little intimidated…?

Bernard I have great memories from that fabulous show The Last Apache Reunion and you were such a gentleman to work with. Great times !

One Town Under A Groove