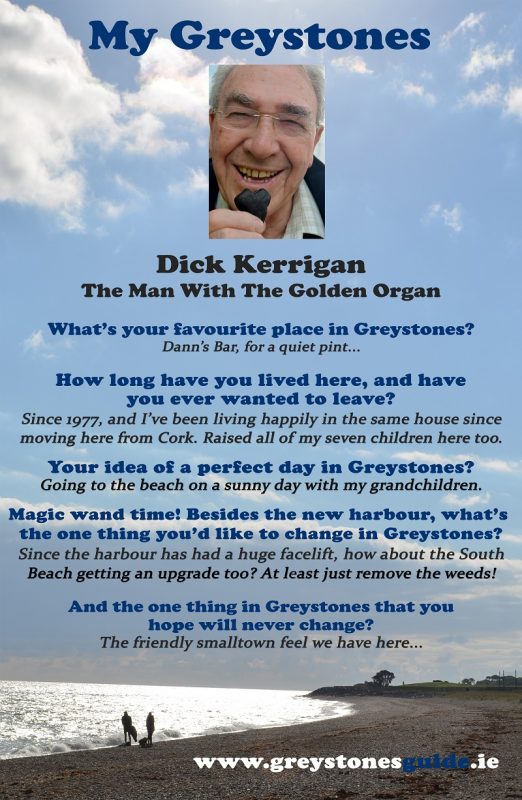 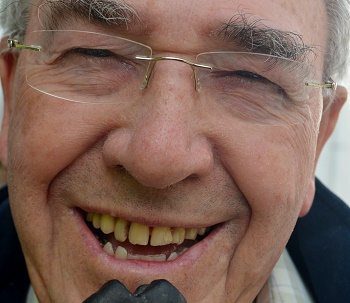 Sure, the man has everyone in Greystones, Kilcoole, Delgany, Killincarrig and beyond fooled into believin’ that he’s just a sweet old man who would do anything 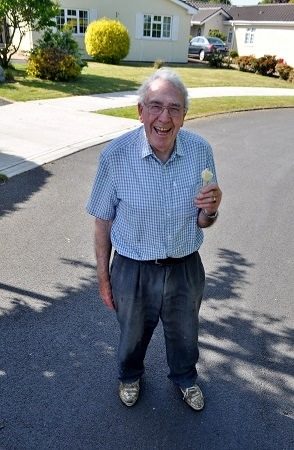 for anyone, anytime, anywhere.

Well, anywhere except Bray, of course.

But, we know better. We here at GG HQ know the dark truth.

Richard Ignatius Horatio Bartholomew Candy Kerrigan is from The People’s Republic of Cork.

Worse, he grew up in Cork after a stint in Carlow and Thurles. A 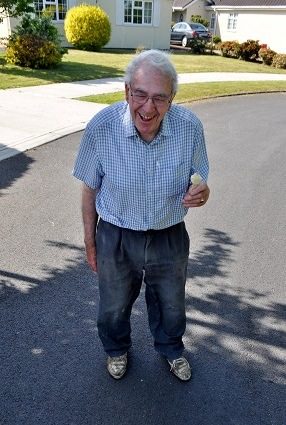 It means the man is merely a ticking timebomb, cocked and ready to kick off all sorts of shillelagh shenanigans at the drop of a trilby.

For the past 39 years, since Dick made the move to Greystones, he’s been on his best behaviour, of course, working diligently for his community, and his church, whilst bringing up seven strapping children with his now dearly departed wife, Philomena, but the man’s just biding his time.

So, for now, we’re willing to play along and pretend Dick is just a sweet old, fun-lovin’, pint-suppin’, organ-playing diamond geezer. We too are biding our time. Ready. Waiting. To lock horns with – gulp! – a Corkonian. 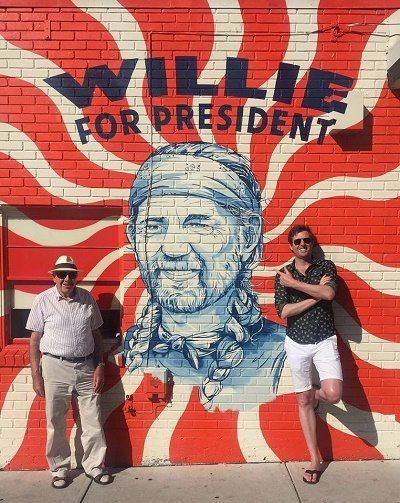 And to push the pretence that all is rosy in the Dickus Mickus garden, we’ve decided to print here, in full, a special family ballad – they’re a musical bunch, those Kerrigans – composed just a few years back to celebrate the man’s 80th birthday…

An Ode to Dixieland Dick

He was born in Co Carlow in 1934
Then to Thurles town he ventured, where there followed 4 young more
His daddy was the Sugarman who kept the Factories sound
His mamma played the piano at the silent films in town

Dicky loved to hear the music, playing the jews harp and the whistle
Then they bought him an accordion which he polished til it glistened
He loved the keys above all else, and to the piano moved
So it was with this affection, he began to find his groove!

The family moved to Mallow, Cork, when he was just 13
Twas here he’d find adventure, with a gang who were a team 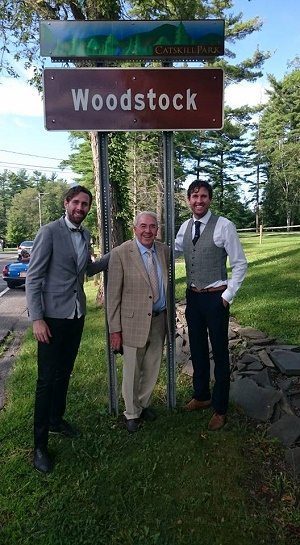 Together they would spend their time, making things that moved
So from sleighs, to planes to boats and trains, they kept their dreams in tune

He built his own canoe, on slats across the bath
The family couldn’t wash themselves with this floater in their path!
He asked “Can I canoe to Youghal with Tom?” a bit more than he oughter
Together, and against all odds, they paddled the Blackwater

He finished his apprenticeship and moved to city, Cork
He started his adventures as he went about his work 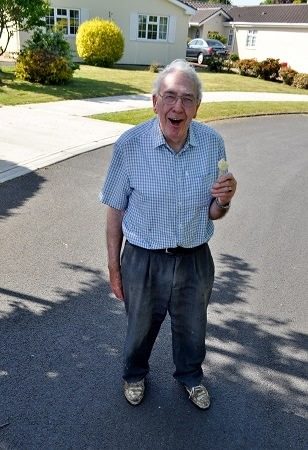 He joined the oil refinery, 1958
Time to start to earn the dough and get to know Whitegate

He found a flat with Colm, up high on Patricks Hill
They bought a large piano, it surely was a thrill
They pushed it through the streets of Cork and up the hill they dragged it
And from the top floor of the house, that piano was a magnet

Charles Lynch he came and played with them, a man who was no toff
He told them tales of music while he played Rachmaninoff
The music scene in Cork was ready for the taking
The boys joined in with open hearts and played til they were aching

Dick’s music brought him countrywide, on clarinet with the “Modern Airs”
Showband, Dancehall, Dixieland in halls and clubs and fairs 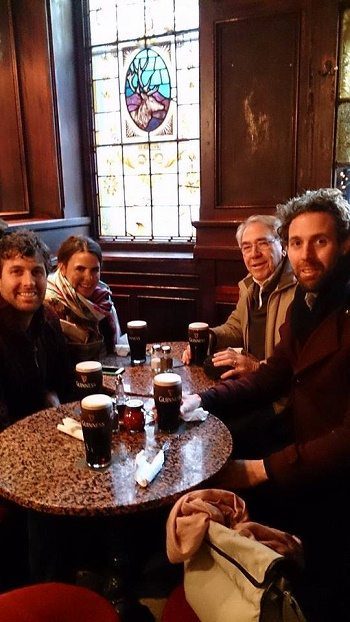 He gatecrashed one such venue, Little Island Club for Golf
It was here on a moonlit starry night, he met his one true love

He married Phil O Driscoll in 1964
An island beauty queen she was, who stole his heart for sure
A lady of the theatre, she oozed with talent strong
She travelled all round Munster, performing plays and song

Five young kiddies later, they upped and moved from Cork
And off to Co Wicklow, a place to live and work
Another two fine fellas were born in ‘79
The only Wicklow people from among the bunch of 9
Here they raised their family, among the Wicklow hills
And built a home from home for them, while trying to pay the bills!
They joined in the community to make a better world
An in everything they did, they gave without reserve

Dick had a lovely garden, the kids did dig and weed
He grew tomatoes, spuds and veg to fill the hunger need!
We travelled in our Peugot, to visit foreign places
We took our little caravan and camped in sandy spaces

And all the while his music, he kept it going well 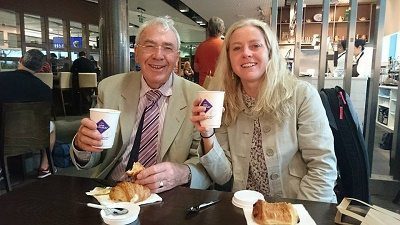 He took some organ classes and saxophone as well
He bought a fine church organ, which lives in his front room
He plays it long into the night, he can’t resist a tune!

He travels to the churches, to play the Sunday service
Greystones, Kilcoole or Newtown, though sometimes he gets nervous
He’s a big hit in the Sacristy they always sing his praises
The Choirs, they love to sing with him, especially if they’re ladies!

He bakes a mean old apple tart, and cookies – very nice
He hoovers, cleans and irons his clothes, sure he’d make the perfect wife! 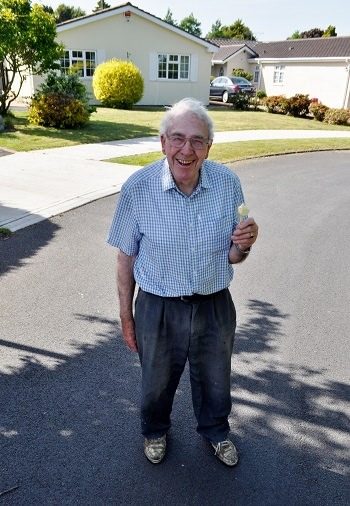 He flies his model aircraft, he plays on his laptop
He keeps on finding things to do, it’s hard to make him stop.

His house is full of instruments!, of records, tapes & song
There’s written music everywhere for him to play along
He has a fine collection, of tunes that time forgot
Which every now and then he brings to life and thinks why not

A sparky man by training, he loves to twiddle wires
He likes to take your stuff apart and find out how its fired
He fixes anything that breaks, he makes something out of nothing
His house is like a workshop mind, so mind where you are stepping!

He loves us all so dearly, we really are so blessed
To have a Daddy like him, .. well sometimes he gets stressed!
He always wants to help you out and never see you stuck
He’ll pick you up wherever you are and down upon your luck.

An inspirational person, our Dixie really is
He’s like a man of 20, shure he’s always full of fizz
OUR Daddy can do ANYTHING! he’s full of fun – we’re serious
There’s only one thing left to say (in a cork accent)