Katie’s The Undisputed Champion Of The World 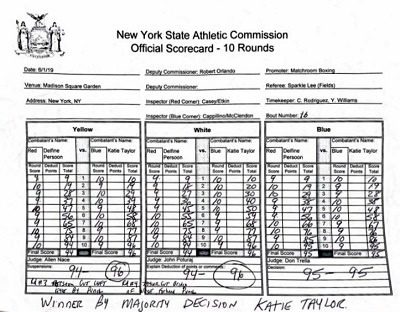 herself as one of the greatest professional fighters of her generation before stepping into the ring tonight goes without saying.

Through professional and personal turmoil, the Bray boxer has always managed, again and again, to come off the ropes, swinging. And And that means, the holder of the International Boxing Federation, the World Boxing Association and World Boxing Organisation belts has now become the undisputed lightweight champion of the world. Taylor is only the third unified champion in the history of women’s boxing.

Of course, Katie has always been an over-achiever, and a trailblazer. How else to explain how she became the only girl to compete in the Wicklow Schoolboys Shield [right], scoring the winning goal for Newtown against Greystones in the U12s premier division back in June 1999.

Nonetheless, beating Persoon was never going to be a walk in the park, this 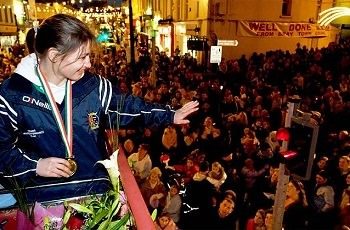 fearsome Belgian unbeaten since 2010, and boasting more knock-out wins (18) than Taylor has had fights. Still, Katie’s opponent was stepping outside of her comfort zone, with all but one of Persoon’s 44 bouts so far having been fought in As for the preparation for the big fight tonight, a typically stoic Katie said, “Every day in camp has been 100 percent focused on the task at hand, so, I won’t sit back and think about it until I have actually achieved it. That’s what I am like.”

Darn tootin’. Since turning professional in November 2016, Taylor’s star has risen steadily, with her first title win coming less than a year later, grabbing the vacant WBA title in October 2017 at the Principality Stadium in Cardiff. And despite a few knocks along the way, the wins just kept on coming. “I’m loving 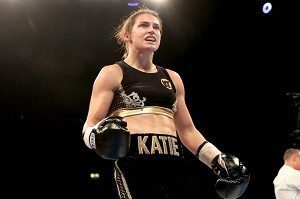 this journey,” she says, “and I just want it to continue for years to come. There are a lot of big fights out there for me. But I have to get by Persoon in order for them to happen. I have trained for what I believe is going to be the toughest fight of my career…” Garden but also The Ring belt, much was riding on Taylor’s shoulders – and her gloves – in New York. And the ringside crowd knew it too, choosing to sing Oasis’ Wonderwall, to help Taylor carry that weight.

As to the controversy over what some are claiming to be a disputable win for Taylor, the Bray native says, “We knew that we stole some of the earlier rounds. We definitely won the fight, but Persoon is a great champion. She has been reigning champion for a long time. That’s what happens when a champion is in against another champion. It’s the best versus the best.

“We are definitely open for a rematch. We’ll see what happens down the line. There are a lot of fights out there for me.”

Boom! Spoken like a true fighter. Give that woman a statue. Now.

The Taylor Persoon fight will be on Sky Sport Pay from 10pm tonight, with the fight itself due to start at 1.30am. Or you can always just wonder the streets of Bray, listening out for the beers & cheers.

A Wok On The Wild Side

Didn’t see the fight so have to take the judges on their word. Well done Katie!!

Everyone who watched the fight last night will have to agree with the fact that Katie lost the fight and calling herself an undisputed champion wouldn’t be the right thing to do. She’s gonna have to admit it if she wants to have respect. Katie still is an amazing fighter but she’ll have to prove it and fight Delfine again without judges help.