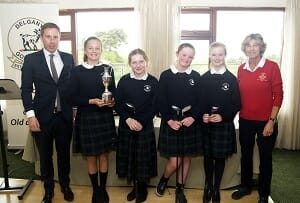 Featuring 15 teams, victors on the day included St Kevin’s National School in Greystones for the boys and St Gerard’s School in Bray for the girls.

The ninth Wicklow Primary Schools Cup final was organised and hosted by Delgany Golf Club on Monday, 15th May, and featured 15 primary school teams from within the Wicklow area. 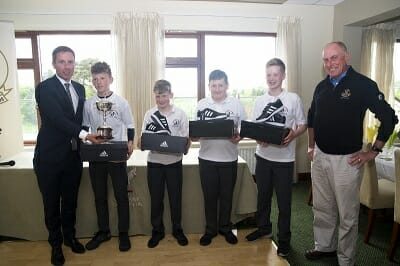 The initiative to encourage school children up to 12 years of age to play golf was developed and promoted by Jason Bradshaw and Delgany Golf Club in 2009. Local Wicklow primary schools have had weekly coaching and practice sessions which have been initiated by teachers and parents involving circa-500 school children from 8 to 12 years of age. The finals involved 60 boys and girls from fourth, fifth and sixth classes.

The Captain of Delgany Golf Club, Denzil Jones, and Lady Vice Captain, Mags McDarby, stated that the club was proud to be associated once again with this event and congratulated all the teachers, parents and the young golfers for their tremendous performance during the year and on the day.

The Delgany Golf Club professional, Gavin Kavanagh, provided the school children with a golf exhibition after the team event. Jason Bradshaw said he was very pleased to see the Schools Cup continuing to grow in popularity congratulated all the schoolchildren who competed.

Congrats to St Kevin’s and St Gerard’s on their trophy titles. And all the goodies and acclaim that came with ’em. Nice. You can find out more about Delgany Golf Club right about here.