The North Beach Cottages: A History

The storms that wiped out a neighbourhood 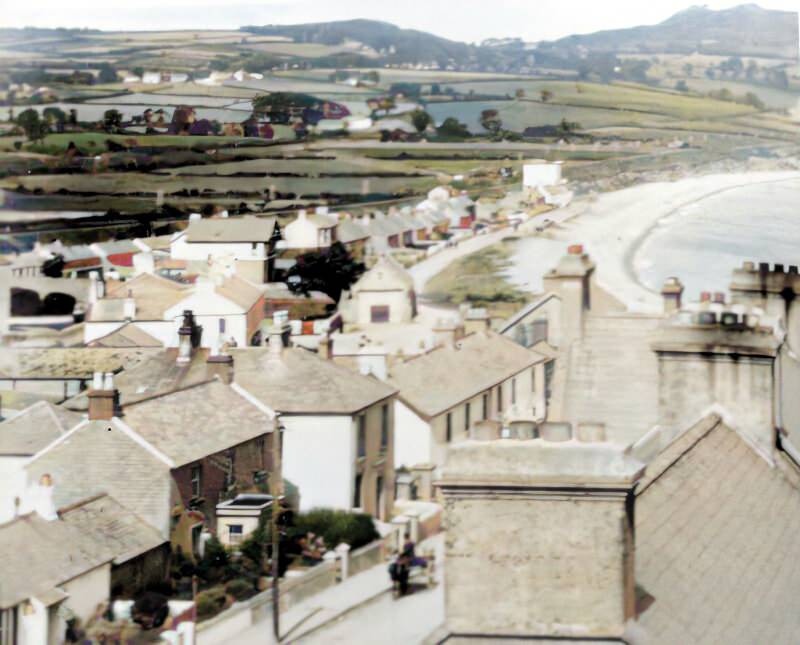 s the harbour goes through perhaps its biggest change ever, it’s more important now than ever to remember what

This stretch of coast has given us the likes of Joe Sweeney and Michael Fields, and here, our #1 town historian Gary Acheson has helpfully put together a timeline charting the building, the life and the fatal storm battering of these iconic Greystones cottages…

1890s – Most of the cottages were built along the beach road during this decade. Three two story houses built at the harbour end – first ‘Alberta’ – later ‘Yarra Yarra’ and ‘Glencoe’ – all three still survive.1897 – Jubilee Castle was constructed out of the disused lime kiln for Thomas Hewson, a barrister from Dublin. Hewson also lived some years in Burlington House at the harbor. It was named for that year’s Jubilee of Victoria’s 60 years as queen.1898 – Wicklow County Council takes on road repairs on the North Beach. After several years they reversed themselves and refused further work.

1903 – Hewson sued the LaTouche Estate to prevent sand and gravel being removed from the beach as he felt it was exposing his property to erosion.1907 – Hewson sued Wicklow County Council to carry out repairs and build a sea wall – he lost.

1910 – Thoms’ Directory lists the occupants of the homes on ‘Sea Beach-road’.1911 – Thomas Hewson died – Jubilee Castle occupied by his brother Rev. Henry Hewson.August 1928 – a sea wall is finally built to protect the road and houses at a cost of  £3000.

February 18 1929 – The sea wall is washed away and roadway partially eroded. A week of southerly gales had removed the beach – it was believed the sea wall  had caused a backwash that undermined the wall itself.February 1930 – More south-easterly gales and spring tides – additional houses are abandoned. The foundations of Jubilee Castle are exposed and eroded. The owner, Mrs. Young, has workers remove furniture and fittings. Mr Curling’s Kiln Cottage is evacuated – the sea is 12 feet from the door. Yarra Yarra is also temporarily vacated. John Evans leaves Renellan Cottage. By now the whole row of cottages and Jubilee Castle are abandoned and

crumbling to the ground. Many of the displaced rebuild in Redford and Blacklion with some government 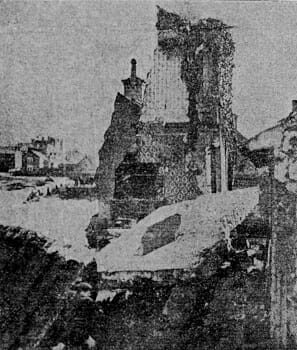 assistance.April 18 1931 – a storm causes “considerable damage” to the North Wall.

After the initial loss of houses in 1929, the Greystones Utility Society was established to help those who had already lost their homes on the North Beach, or those who were in clear danger of doing so.

Formed largely by the householders themselves as a support group, plans were put in place as to where to build new homes in Greystones, with several sites mentioned.

Eventually, fields owned by Mr Maguire at the railway arch and Mr Carr at Blacklion and Jink’s Hill were agreed upon. 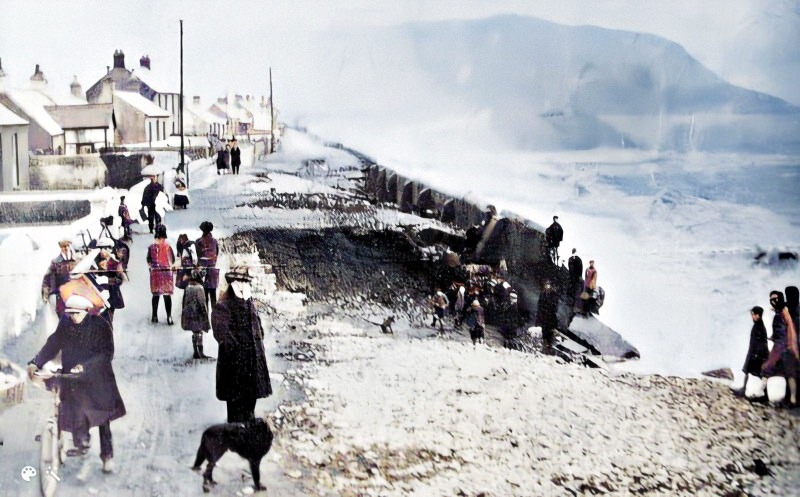 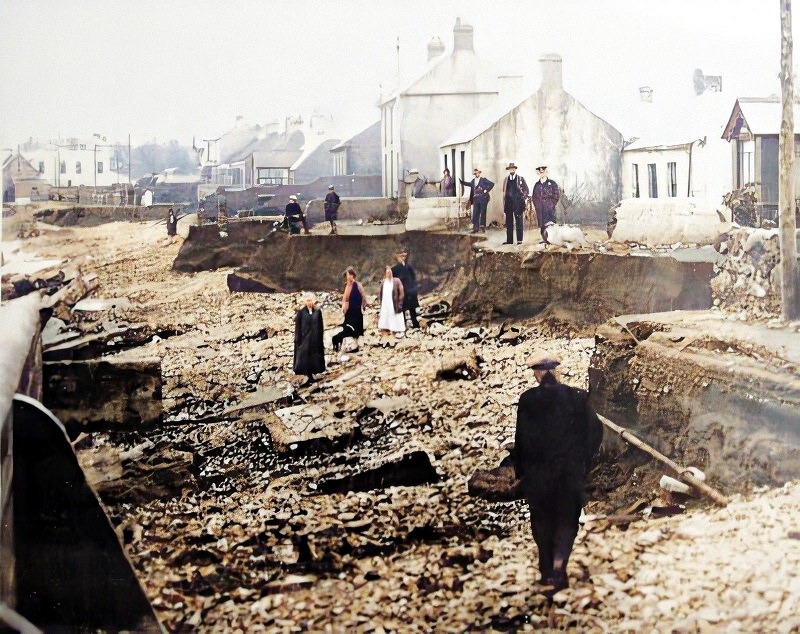 The aftermath of the North Beach storm 1929 Colourised 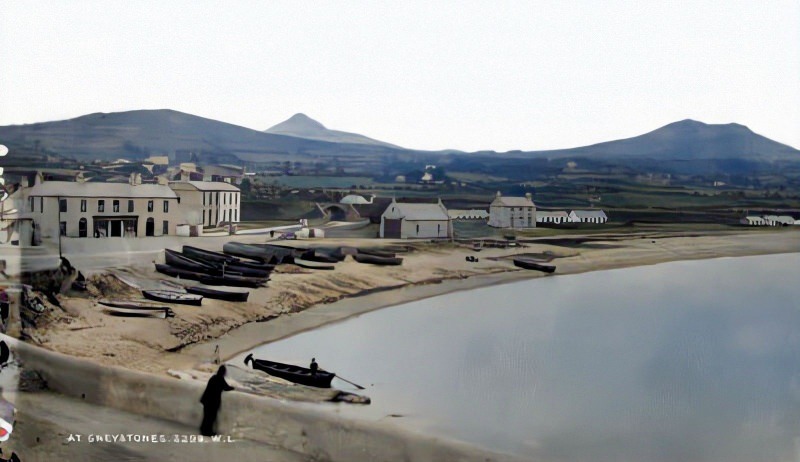 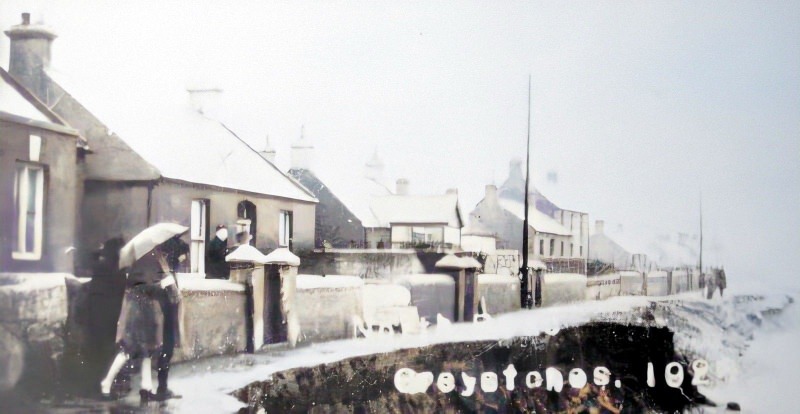 Storm leaves its mark on the North Beach Cottages 1929 Colourised 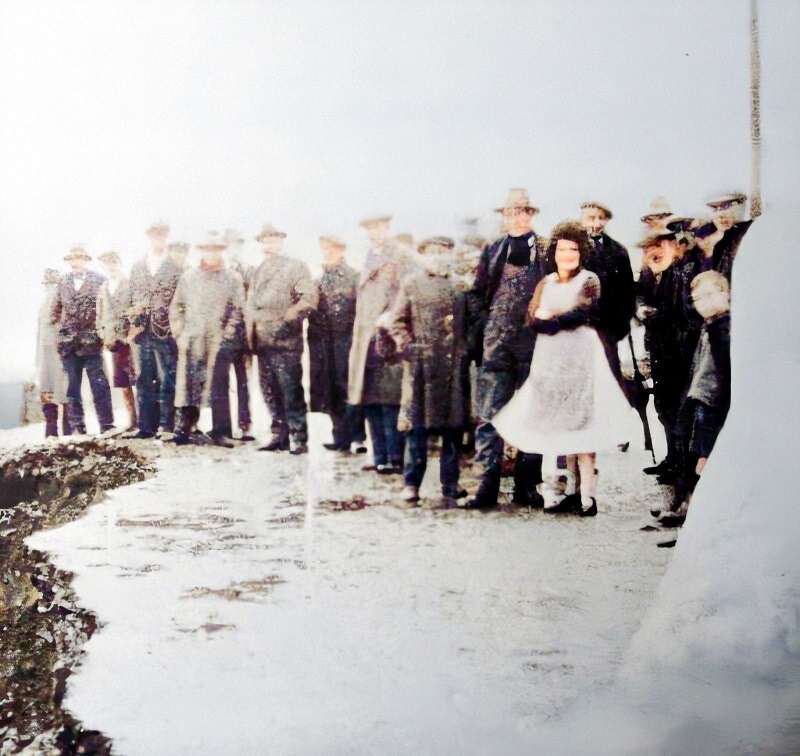 Before the exodus to Blacklion and Rathdown Rd Colourised 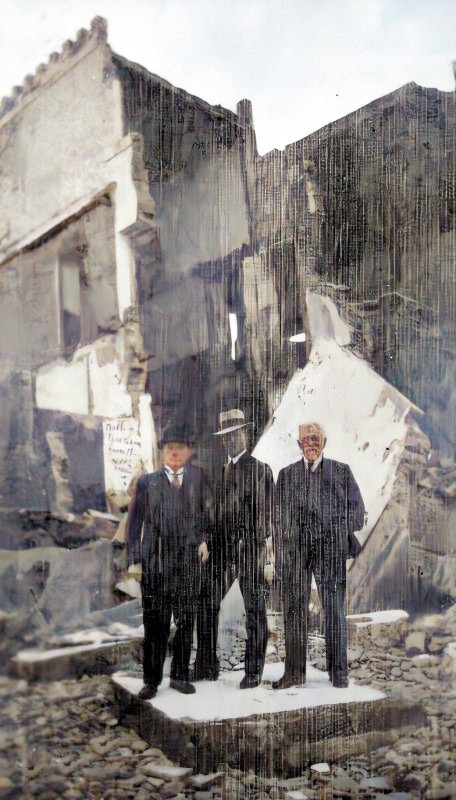 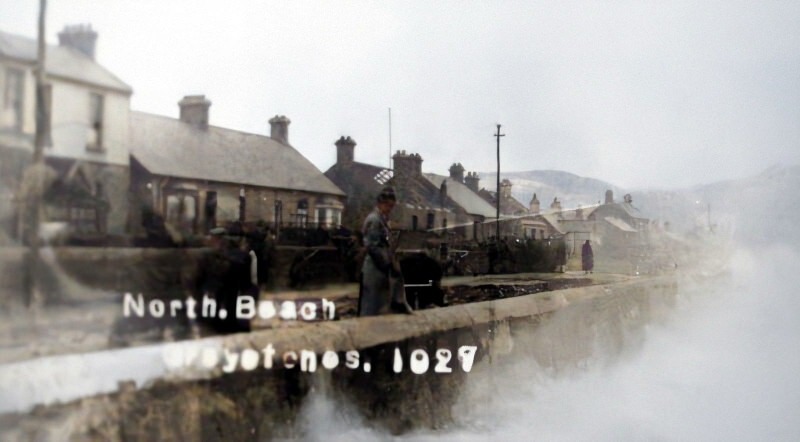 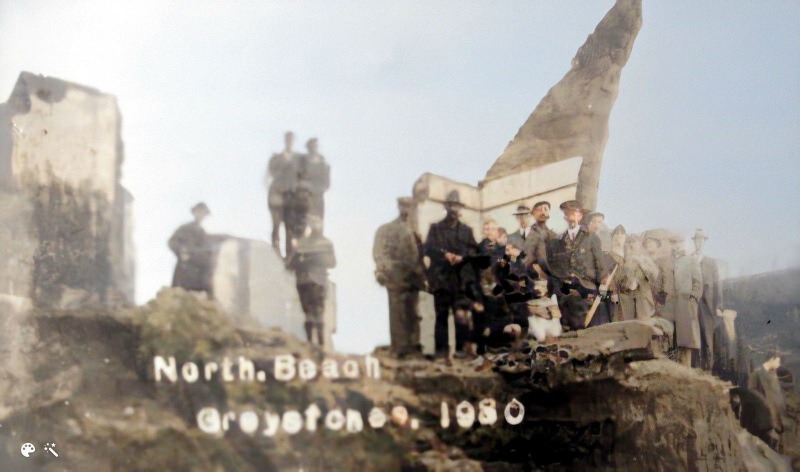 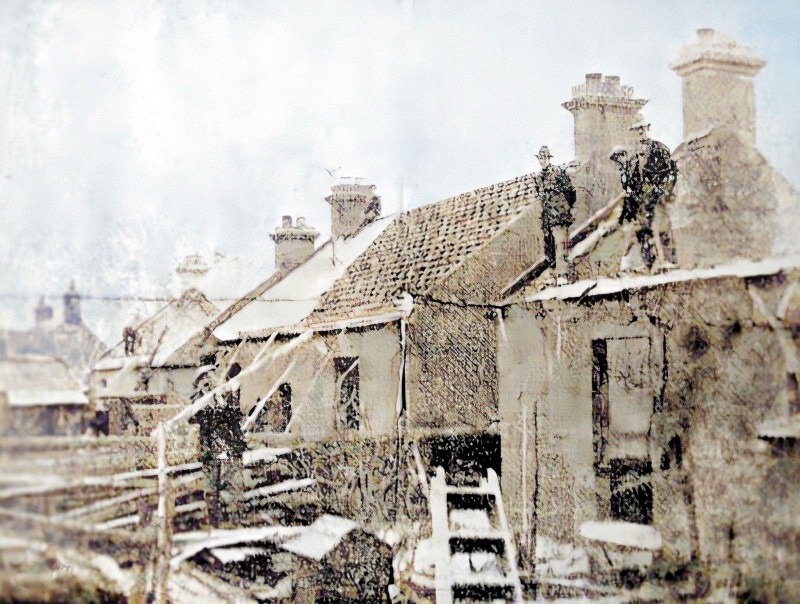 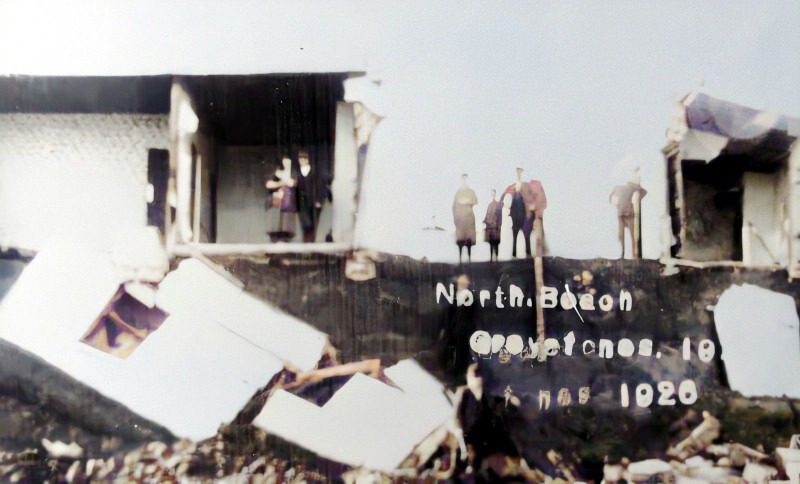 You can check out the history of The Jubilee Castle – aka, The Rosetta Fort – here, and another battering storm here.

1910 – Thoms’ Directory lists the occupants of the homes on ‘Sea Beach-road’. Where can I find this info please?

My great grandfather Frederick Strafford died in 1913 and his last address was ‘Wave Cottage, Greystones’. Any chance his was one of the homes along Sea-beach road?

All and any info appreciated!

Have emailed young Gary Acheson, the man who put the history together. Will let you know when he gets back to us…

Hello Paul, I am checking in to see if you heard back from young Gary Acheson. Thanks! Jo

Great photos, and a perfect day to be viewing them with the storm that’s in it… also my dad Michael Kinsella and his family were born there… my dad was 5 when the storm hit and he remembered it well and told us all stories of the night it happened and having to carry belongings from the house across the fields being charged for each load carried over the land.

Gary is to be congratulated on the superb restoration of the photo of the houses along the North beach, and for revealing the actual ‘dipping tank. What can be seen also is the beginning of the new embankment cutting out from the new rail line from the big tunnel to meet the original embankment at the back of the Bawn. The cottages in the Bawn, incidentally, predated all the other houses by decades.

Thanks for that, Jago.
I actually did the photo restorations here at GG – Gary provided all the smarts and historical know-how. As usual…
Have a sweet Christmas!
Cheers,
Paul

Are these cottages the bawn?

No the Bawn is still there entrance at arch.

These Photos of the houses on the north beach are fantastic,thank you for that . My Grandparents lived there and my mother was born there I just remember her telling us all about the houses and the storm.

Up To Their Feckin’ Eyes In Awards