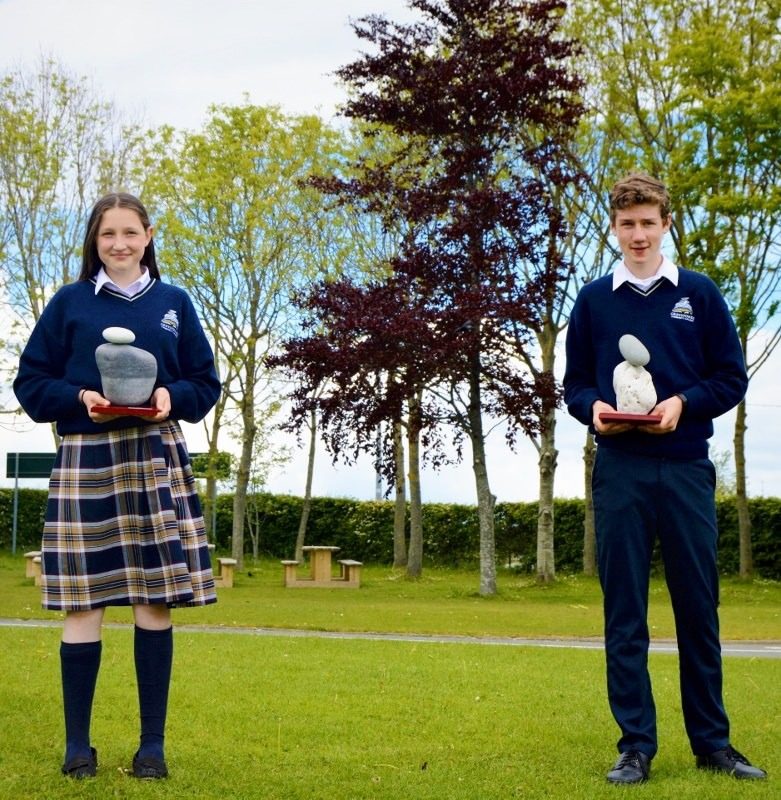 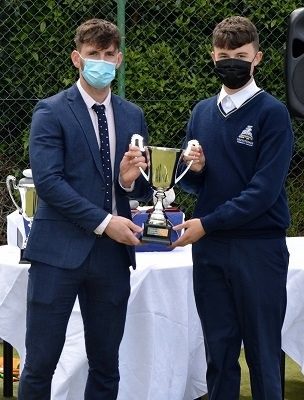 awards ceremony went off with a bang and a few socially-distant high-fives this week.

And we managed to wrestle a press release from the GCC gang to prove it. 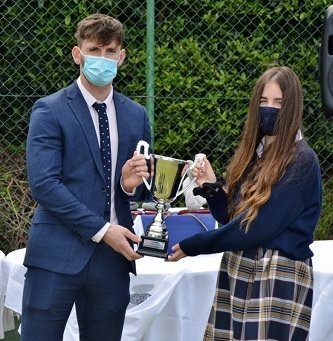 Every piece of work is a self portrait of the student who completed it, and the students acknowledged at the Greystones Community College Awards day complete a masterpiece on every single occasion. 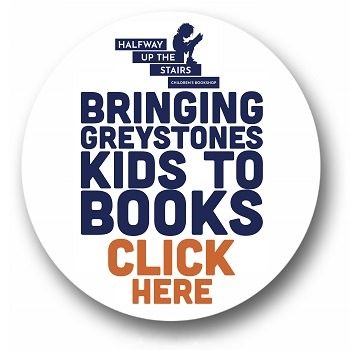 It was a wonderful celebration as the college marked its inaugural awards day to honour the achievements of the students in the first year since the school’s establishment. The awards day, which was streamed live to parents and guardians in the school 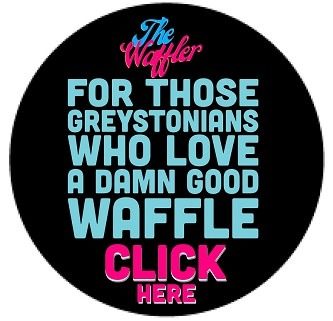 community was an opportunity to acknowledge those who left no stone unturned in their academic achievement but also their contribution to sporting and artistic endeavours and indeed fulfilling leadership roles during the year. 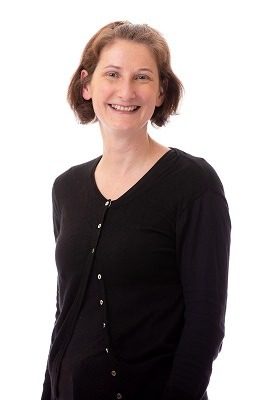 Cllr Lourda Scott, Chairperson of the Board of Management commended the students for their hard work and determination in overcoming the obstacles that this year had thrown at them. She acknowledged the dedication of school staff in creating a fantastic school against all the odds. 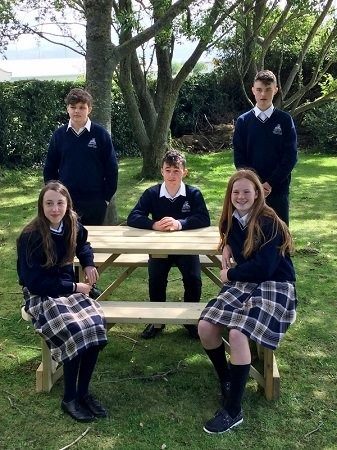 The Roll of Honour of Award Winners included the Bunchloch Awards for Respect, Excellence and Pride which were presented to three students who embodied the foundation stones on which the college is established. The Respect award went to Hannah Atkins for her positivity, respectful nature and positive interactions will all in the school community. The Excellence Award went to Sofia Flores who shows exceptional attention to detail and leaves no stone unturned in every single task she puts her mind to. 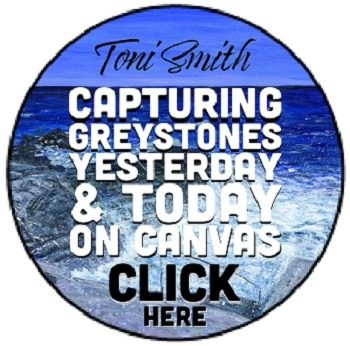 The Pride Award was presented to Haylie Foley to acknowledge her can do attitude and her enthusiastic involvement in all aspects of school life.

The Buaic Cloch Awards were presented to the Students of the Year at Greystones Community College. 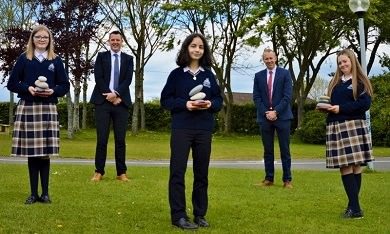 Buaic Chloch translates from Gaeilge as Pinnacle or Peak Stone as the worthy winners have certainly reached their peak this year. 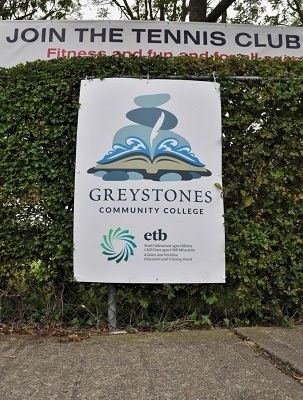 The Buaic Chloch (Student of the Year) for the boys was Callum Halpin Rooney. Callum’s teachers have described him as hardworking, enthusiastic, a gentleman and a real leader.  He is a fantastic student who portrays consistent exemplary behaviour and grades. Callum is always willing to go above and beyond the call of duty and his polite and kind nature towards staff and fellow students make him someone who future students in GCC can aspire to be like. 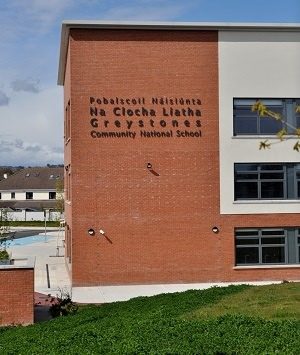 The Buaic Chloch (Student of the Year) for the girls went to Naomi Wall. From excellent grades in all her subjects to her involvement in GAA, soccer and athletics, she excels at absolutely everything she does. The words phenomenal, outstanding and inspirational were used by teachers to describe Naomi and her caring and polite nature along with her maturity of our Buaic Chloch winner makes her a real ambassador for our school. 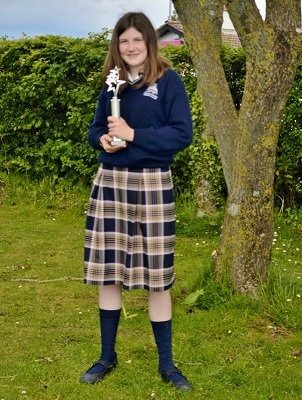 To acknowledge the student voice, GCC presented a Student Choice Award and the winner was selected by the student body. This award was not academic or sporting but was about acknowledging a special characteristic or trait seen by others in one particular student that may often goes unnoticed, something that the students feel is valuable and important to acknowledge. The award was presented by Liam Dooley, Chairperson of the Student Leadership Team to Ellie Walsh. According to her peers, Ellie is super friendly, kind and always sets a good example for others with her schoolwork. This made her the obvious selection for the student choice award. 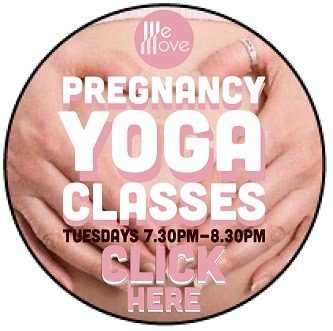 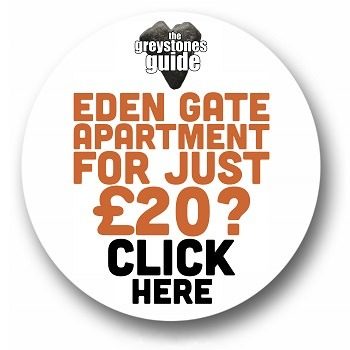 Achievements in sport were also acknowledged and sports awards were presented to the winners from our recent sports day including to our 100metre champions, Rian McCowan and Abigail Moran and our 800metre champions, Callum Halpin Rooney and Naomi Wall. Overall sports boy and girl of the year went to Billy Doyle and Izzy Di Ruzza who took home the perpetual trophy. 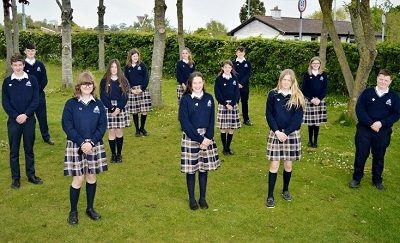 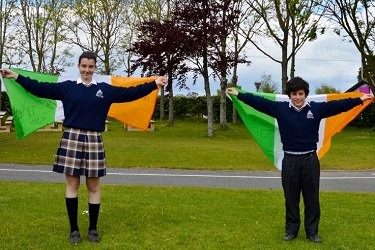 The new Student Ambassadors for 2021/2022 were also announced. These students will mentor and support our incoming first year students and be role models for them in the year to come. In total, 36 students received leadership awards at the awards day, to acknowledge the great contribution our students have made in leading and developing our new school.

A special presentation was made to Izaskun Molina and Pablo Picon, the schools two international students who contributed so much to the school community of Greystones Community College in the past year. They forged great friendships with their peers, improved their English and threw themselves into every possible activity which studying here. GCC will be sorry to see them go but wish Pablo and Izaskun every success in their futures when they return to Spain.

Concluding the awards ceremony, Principal Ruairi Farrell paid tribute to the staff and students of the school who bought into the vision we all share for GCC.

“I am so proud today to celebrate all these successes with you, to think how far we have come on this journey.

“And I am proud to think how many exciting adventures, opportunities and successes lie ahead for each and every student in the years ahead.”

Get On The Bus, John