Back in September, 1951, if Joseph Ryan hadn’t been sitting in Dann’s pub when Sean 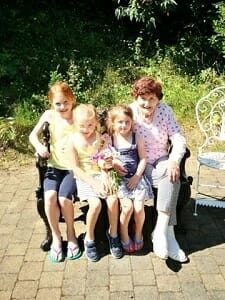 O’Brien and his young Finglas bride, Bridget, walked in for a honeymoon drink, he would never have met the love of his life.

Joseph worked for the merchant navy, and was about to head back to his base in Liverpool – which, wouldn’t you know it, is where Sean’s family happened to live. And so, after a few drinks, it was agreed that Joseph 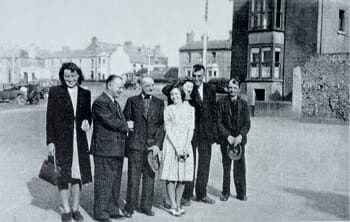 would take the wedding snaps back with him, to the O’Brien clan in Liverpool. When he knocked on the door, Carmel answered.

One year later – on September 5th, 1952, to be precise – Joseph and Carmel were married. And then along came baby Kieran a year later. Not long after, baby Paul came along too. When Joe’s father took ill back in Greystones, Carmel insisted the family should be by his side. And so, in 1960, the Ryans came to live in Arch Villas, and they soon expanded to include Aileen, Fiona and Fergus too.

Carmel had visited Greystones on holiday with Joe, back in 1949, and she was immediately struck at “how beautiful the place was”. So, starting a new life in Arch Villas was made all the easier by Carmel’s love of her surroundings, taking long walks pretty much daily along the seafront, from the north beach and on past the harbour, to the South Beach and beyond.

It was a far cry from the Lakelands Convent in Sandymount, where the two-year-old Carmel landed after her mother sadly passed. Born on July 16th, 1931, Carmel is quick to point out today that life growing up in the convent was a happy one, and it was with some reluctance when, at the age of 14, she finally followed her father and his new wife to Liverpool. Dad had a good job down at the Liverpool docks, as a steel erector, and, besides, Liverpool in the 1940s was pretty much an extension of ol’ Eire, given the huge number of Irish living and working there.

“Once I came to Greystones though,” says Carmel, “I knew that I was home. It felt amazing to visit as a teenager, and it felt amazing to move here, years later. I just knew this was the place that I would spend the rest of my life. And that made me so happy…”

Reposing at her home, Sunday, March 18th, from 2pm to 6pm. Funeral Mass on Monday, 10am, at the Holy Rosary Church, followed by internment in Redford Cemetery.

And You Will Be My Queen…