Standing Room Only At M11 Meeting 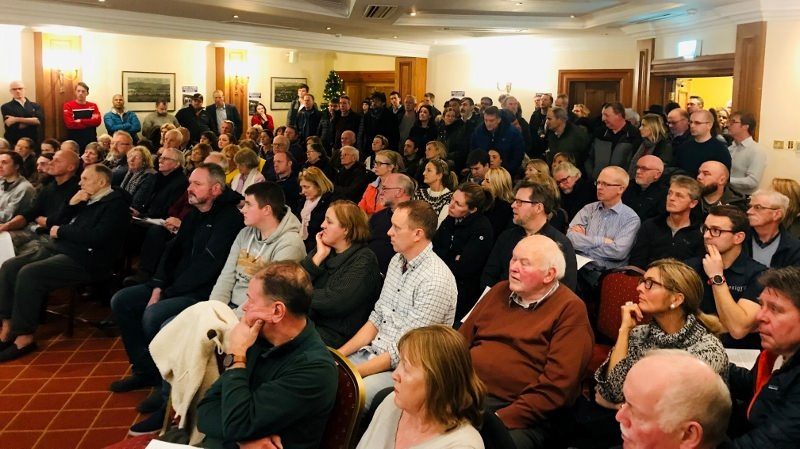 Press release from Brendan Power, of the M11 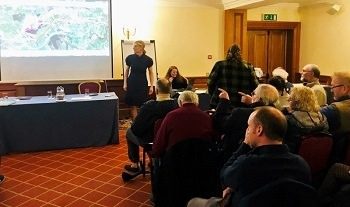 There was standing room only in the big meeting room in The Glenview Hotel last night as concerned locals gathered to share information about the proposed plans for new motorway routes on the N11.

For many of the attendees, the meeting was their first inkling that a new 6-lane motorway could rip 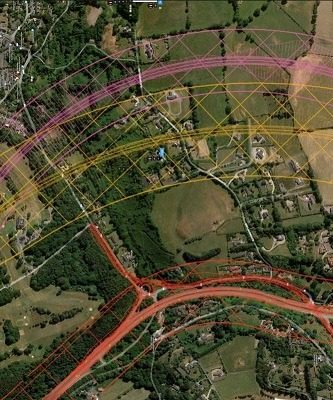 With a deadline, fittingly, of Friday the 13th for submissions to be emailed to n11m11@arup.com, the paucity of information from those behind the scheme remains a source of major concern. And time is clearly of the essence.

For some attendees the motorway proposals would destroy the viability of their farms. For others, it would rip through their living rooms. Others would be left stranded on an island between the old N11 and the new M11. For almost everyone, the health effects on children – including increased likelihood of asthma, COPD, and more – was an eye opener that had not been shared by those behind the scheme.

As the meeting progressed and people realised the full scale of the scheme being planned, three words summed up the mood.

People, of course, see the importance of improved transport. But they are mystified as to why these 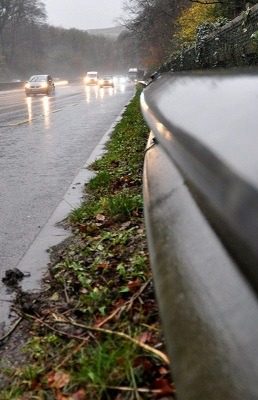 options have been chosen. They are frustrated about the lack of proper information and that what little information there is was given to just a small section of those affected. And they are determined to use every possible option – whether it be awareness raising, objections, legal challenges or more to stop the scheme in its tracks and force a rethink.

The local residents from Kilpedder, Drummin, Glen of the Downs, Ballydonagh, Delgany, Greystones, Kilmmuary, Kilmac, Foxborough Lane and many other areas are now joining forces to fight the new 6-lane motorway routes that were sprung upon them without warning by Wicklow County Council in November.

The new motorway routes, which would tear up greenbelts, farms, businesses, homes, sports facilities and communities, are proposed as alternatives to the improvement and widening of the N11 to make it the M11. The proposals have no support, either from local residents or the finding of the research and studies undertaken by various authorities. A needs assessment completed just 2 years ago, in 2017, found no evidence to support a motorway. The national roads strategy also failed to find any basis for putting more cars on the N11 as it would just bring more cars onto an already full M50.

There are a number of routes. But taking, say, the Orange and Pink ones as the first examples, these 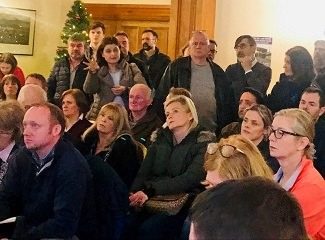 two routes would rip through or over Drummin Hill, traverse the valley at Delgany village, taking out a section of houses at Valley View before moving on up through Delgany Golf Club, through more houses, trees and farms at Ballydonagh, and on through Foxborough Lane before re-joining the existing N11 (or new parts of what are the existing N11 route). Both these schemes would need huge embankments or flyovers – maybe eight storeys high – for motorways with capacity for up to 80,000 cars per day, not to mention huge amounts of taxpayers money. And all were just announced with limited information.

The Cyan route to the west of the beautiful Glen of the Downs takes a more meandering route. And on the map provided by the proposers, it looks harmless. But local knowledge shows that the route would destroy the livelihood of countless small farmers, whose families have worked the land for 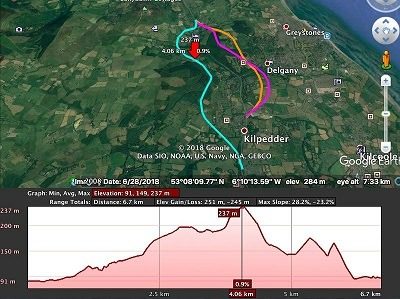 generations. It would demolish an ancient ring fort, and hit wells or water courses at many points. Not to mention the homes that would be wrecked or left severed from any local village.

The fourth option, widening the N11, also brings a multitude of challenges in engineering, environmental, cost and more. This option – the so-called Red Corridor – creates problems instead of solving them. and it too would wreck the homes and lives of families living in the path of the bulldozers.

And none of the options actually address the real issues – bad planning, poor public transport, siloed thinking and the ill-conceived desire to pump hundreds of millions of euro into a road that is not needed, not wanted and not properly planned.

Matthews and a rep. from Andrew Doyle’s office highlighted the significance of these proposals in the public domain.

Use your voice as members of the community and say No Way!

Your two-page form should be submitted to m11n11@arup.com. You can find out more about the plans – with Phase 1 reports now added – here, and here, about M11 Friday 13th here, and check out the latter’s mock-ups for the new roads across Delgany here.

The people complaining about the motorway clearly are not stuck on the road commuting to work every day., with the journey taking double the time it should take due to congestion. The statistics show how traffic has increased so how can anyone with a logical brain say that a motorway is not needed. To say add busses doesn’t address the fact that many people would need to drive to meet those bus routes and pay for full day parking and probably still have to walk from the nearest bus stop to their job. Public transport is not a solution.

Large, free Park’n’Ride car parks splattered all the way down the N11 route, with feeder buses to major public transport is one definite solution. Much easier to build a 1,000-space car park in five, six, seven major junctions would cost a lot less, and take a much smaller crap on the environment.

Let’s face it: with property prices in Dublin and South Wicklow more and more people are moving to North Wicklow and Wexford and they need to commute to work in Dublin. Public transport actually doesn’t exist or would add another hour or two to already long journey. I had to move my work hours to 7 to 3 to make traffic bearable on my way to and from work, and still it’s taking 3 hours of my life per day, taken from my family, my rest time, my life. Businesses need to move from Dublin, public transport needs to be improved (I don’t see how without investing in underground, there is no room in Dublin for more buses), otherwise new roads need to be build. There is no easy solution for this problem, I’m afraid.

Multiple solutions to an undefined need. The issue is commuter congestion. Where are the solutions that would take cars off the road?