When it comes to sex appeal, with fruit – as with Belgians,

furniture and Tomasso Spennato – it’s all about how you look at it.

on the right liquid delight, pretty much anyone, or anything, can have a certain allure.

As if to prove the point, the Flynnstones have decided to take a radical new approach in trying to make Ireland eat healthy. They’re releasing a sexy calendar consisting entirely of erotically shot – and

Talk about a lemon entry, my dear Watson! I love you from my head to-ma-toes!

Just in time for Christmas, The Happy Pear Fruity Calendar 2017 should prove just as popular as the Greystones foodie empire’s award-winning cookbooks.

“People tend to dismiss healthy foods as dull and bland,”

says Twin One, “but, that’s crazy. Just look at the ass on this peach. Nice!”

That it’s vegetables rather than fruit that tend to come in so many rude shapes and satisfying sizes isn’t lost on the lads.

“It would have been too easy to go down the vegetable route,”

says Twin Two. “You know, the big carrot that looks like a willy, or the two big melons that look like, well, two big melons. We wanted to be a bit classier than that.

“By showing, for example, you how two peeled orange segments 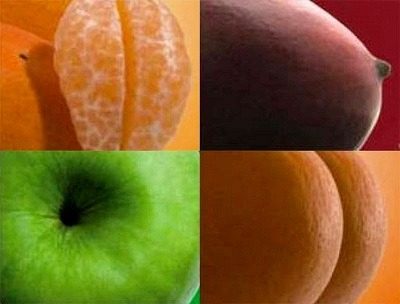 For Twin One, it’s all about proving that fruit is more than just rotting decoration in a kitchen bowl.

“The great thing about fruit is that it’s not only incredibly healthy, but it’s also enormously versatile,” he beams. “Man, whenever I get my hands on some Nonda plums, throw in a little

Rambutan action, and then finish it all off with a good, hard Pummelo, well, suffice to say, there’s a party in my mouth that night.”

“We’re not just talking Passion Fruit here,” finishes Twin Two. “We’re saying, fruit is passion, man. Just give yourself over to its sexiness, take it all in, ravish it, devour it, suck it dry…

“You gotta feel it. Believe it. Play the part. ARTICHOKE ME, DADDY!”

You can indulge in more prudent prickly Pear pranks here.